Tropical Depression 9 Forms In Caribbean, Expected To Strengthen Over Gulf This Weekend 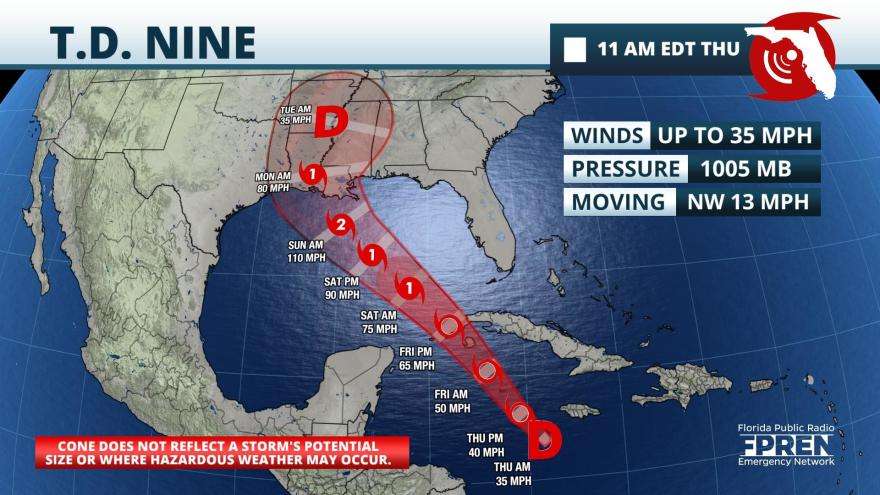 The strong tropical wave over the western Caribbean is now Tropical Depression 9. The depression formed about 200 miles southeast of Grand Cayman Island late Thursday morning, and is moving northwestward at about 13 mph. It is forecast to become a hurricane in the Gulf of Mexico this weekend and pose a significant risk of storm surge, strong winds, and heavy rain to the central Gulf coast late in the weekend.

Tropical Storm Warnings were issued for the Cayman Islands and western Cuba late Thursday morning in anticipation of tropical storm force winds arriving there Friday and Friday night. The system is expected to strengthen gradually over the next day or so as it experiences some wind shear. However, most computer model simulations are predicting a favorable pattern of light wind shear and very warm water in the Gulf of Mexico this weekend — both of which favor significant strengthening.

The depression is moving steadily toward the northwest. A strong high pressure area over the Carolinas and Georgia is expected to extend into parts of Florida this weekend. The steering flow around this high should cause the developing system to move northwest and then northward toward the Central Gulf Coast. A direct landfall from the center of this storm is unlikely in Florida because of the presence of the high.

There may still be some adjustments to the track of the storm since it it is in the formative stage. As of Thursday morning, a high percentage of the track models and their ensembles forecast the center of this strengthening system to make landfall over the upper Texas coast, Louisiana, or Mississippi some time Sunday or early Monday. The worst conditions would likely be felt in these areas, but outer effects could also extend to Alabama or the western Florida Panhandle if the center of the storm were to track along the eastern edge of the forecast cone. The first arrival of tropical storm winds could reach the coast as soon as Sunday morning if the system maintains its steady forward motion through the Gulf.

Forecasters at the National Hurricane Center are urging residents from Texas to the Florida Panhandle to closely monitor this system and have their hurricane plans in place in case protective action is required this weekend.