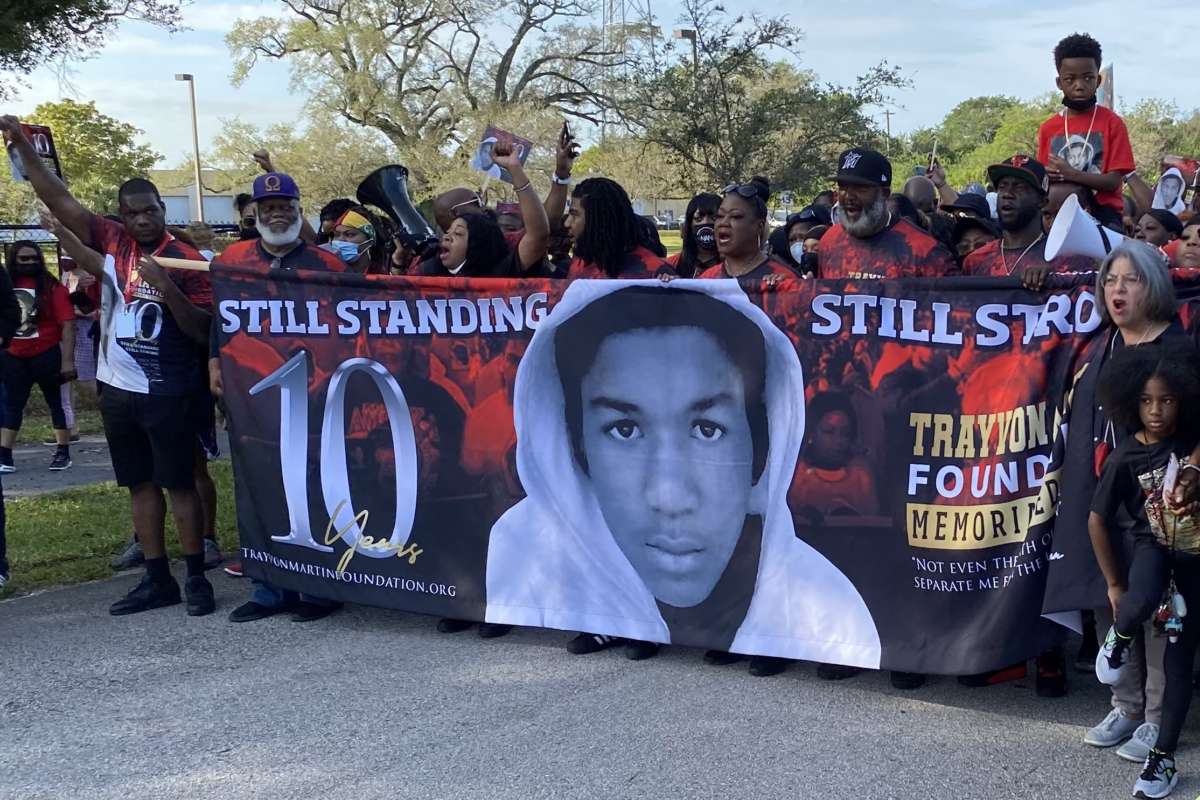 Trayvon Martin's parents -- Sybrina Fulton and Tracy Martin -- led a march and rally in Miami earlier this month. They are shown here above the image of Trayvon Martin in a hoodie. Photo: Joe Byrnes, WMFE News

Saturday will mark 10 years since Trayvon Martin, a Black teenager from Miami, was shot and killed while walking back to his dad’s place from a 7-Eleven in Sanford.

His killing by neighborhood watch volunteer George Zimmerman — who ultimately was not convicted — led to protests across the country.

Many say his case started the Black Lives Matter Movement.

On Feb. 5, Trayvon Martin’s parents — Tracy Martin and Sybrina Fulton — led a rally in Miami. Fulton spoke forcefully from the stage, and Tracy Martin talked about their son on what would have been his 27th birthday.

He ‘galvanized’ the country

Trayvon Martin’s death is always going to be heartbreaking, his father said. “His departure from life leaves an emptiness that, you know, it’s hard to fill. I don’t think that that void would ever be filled.

“His story is written, Trayvon is in the history books. … Just knowing that he galvanized the country and that he’s etched in the fabric of America, it means a lot. I think that, you know, he’s brought awareness. Certainly, he’s opened up the eyes of many people with injustices that occur in pockets that we don’t really know about.”

Fulton said Trayvon Martin is resting in power as a symbol for victims of racial injustice.

“My son,” she said, “is the voice and sometimes the face for so many other Trayvon Martins that you don’t know.”

And in response, Fulton is trying to do her part, she said. “If you really want to support Trayvon Martin and all our young people, knowing that our children’s lives matter. Then just do your part. Do your part. That’s all I ask.”

Tracy Martin remembered his son as fun-loving and outgoing.

“He really loved his family,” Martin said. “He used to love riding motorcycles, on dirt bikes, skateboards. going skating. He used to love all of that.

Martin sees some “traction” in the fight for racial justice.