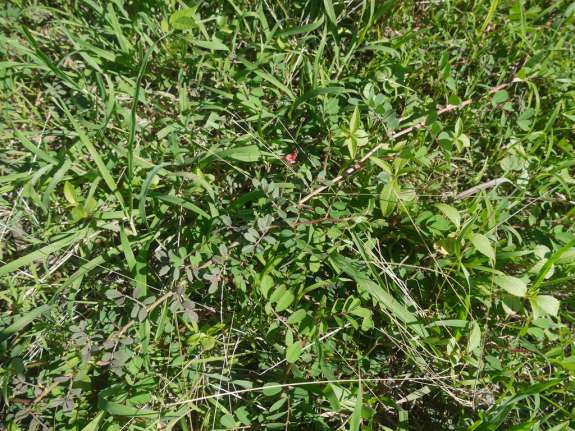 The toxic plant first appeared in Central Florida about a century ago. Photo: Flickr.

The resurgence of a toxic plant called “creeping indigo” is causing horse deaths in pastures as far north as Alachua County and far south as Lake Okochobee. The horses are dying after grazing on the plant.

University of Florida weed scientist Jason Ferrel has seen “creeping indigo” appear every five to ten years.  It first appeared in Florida about a century ago.

Ferrel says the plant first appeared in Florida nearly a century ago. He says three steps control its growth; first, to identify the weed and spray it with herbicides; second, to grow healthy grass that can overpower the legume.

“The third step,” he says, “is to continue to scout those fields and to watch them to make sure the weed is staying out so that we can continue to know that our horses are in a safe environment.”

Ferrel has identified “creeping indigo” as one of several deadly invasive plants, like crotalaria and oleander, that need to be managed before they do more damage.

He says eradicating those plants takes time and money, but controlling them is easier, and control will require work from researchers and horse owners.

“There is not a single answer that is going to be sufficient,” Ferrel says. We don’t need to focus just on this one plant. We really need to look at what is in our pastures and is everything that we have out there safe and good for our grazing animals?

The University of Florida is hosting several workshops on ways to identify and kill “creeping indigo.”

The next one is next week in Seminole County.