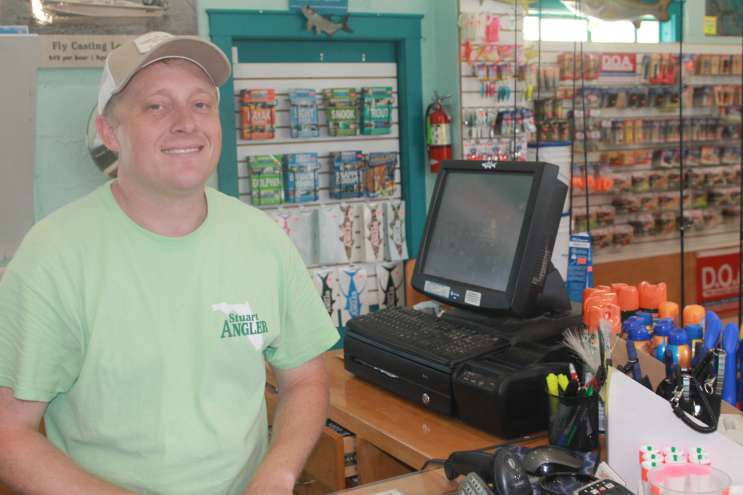 Kids fish off of a narrow dock in Manatee Pocket, casting lines into coffee-colored water untouched by the toxic algae bloom fouling the St. Lucie River a mile up the canal.

For three days these young summer camp-goers have reeled in snapper, puffer fish, catfish, trout and much else from the dock. Normally they would have ventured by boat to fish beneath the Roosevelt Bridge, which spans the St. Lucie River in Stuart. But not this year.

Giles Murphy runs the summer camp. He is a local fishing guide and owner of Stuart Angler, a bait and tackle shop.

“There has never been green algae back here at these docks. I’ve been checking every day to make sure it’s safe enough for the kids, and the water really is fine back here. But it is a big problem elsewhere. This is one little hideaway spot where we can get away from any dangerous water.”

It is a rare respite from the blue-green algae that since May has fouled the St. Lucie River, Indian River Lagoon and Atlantic Ocean, prompting emergency declarations in three counties.

Annie Gilroy, 6, boasts about a jack she caught, a big one streaked with yellow and green. She worries about how the toxic algae will affect the fish.

“I hope the fish still live in the water because they can pretty much die from the allergy.”

Later at his tackle shop Giles Murphy restocks a cooler of bait fish.

“This little guy over here is the inshore baits, and I have not been restocking that much at all for the last two months.”

That’s because his inshore business vanished once the algae arrived. Now customers want to fish offshore in the Atlantic Ocean, far from the algae bloom.

If ingested the algae can cause nausea, diarrhea and vomiting and can affect the liver and nervous system. People are warned not to eat fish from affected waters.

Murphy specializes in inshore fishing and says business is off 50 percent. He gets by on things like the summer camp and on offshore fishing.

“That really is what keeps us alive. I mean the inshore business is really like zero to none.”

Mark Perry of the Florida Oceanographic Society eyes the water lapping the shore in downtown Stuart, where shops and open-air restaurants line the St. Lucie River. The water is bright green from algae.

Sporadic fish kills have been reported, and many worry about a widespread die-off similar to one earlier this year in the Indian River Lagoon, the worst in the lagoon in modern history.

But Perry says the affects might be more far-reaching. For instance this is the peak spawning time for fish species like the spotted seatrout.

“We’ll have a loss of a whole generation perhaps of spotted sea trout for instance.”

And he worries about the local fishing industry.

“The fishing guides, the bait and tackle stores, everybody knows their businesses are down 20, 30, 40 percent, and in some cases they’ve gone out of business.”

Back at the summer camp 10-year-old Andrew Robinson practices casting a fishing line.

“It disappoints me because I think we could probably fix this problem if we try hard enough.”

He loves fishing and hopes the adults can fix the algae problem so he can keep on fishing.