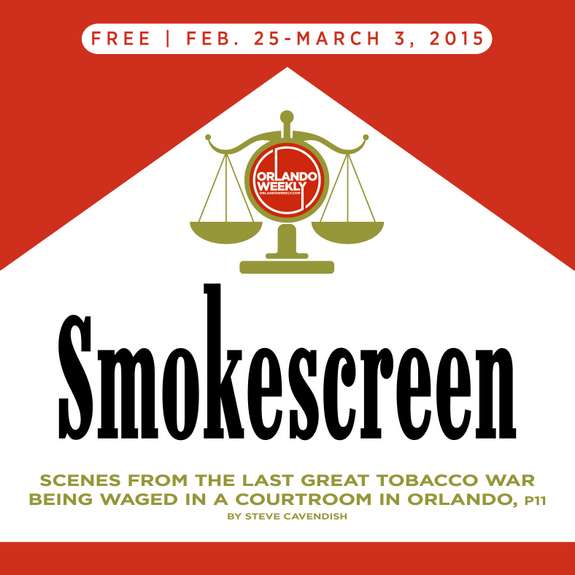 There’s a war being waged in federal court in Orlando – one that you may have thought was over years ago, when a jury concluded for the public in 1998 that for decades cigarette manufacturers knew that their products were harmful and addictive and that they’d been hiding that information from the public.

As a result of the case, Engle v. Liggett, tobacco companies were required to pay billions in smoking-related Medicaid costs and make their internal files about their products public. Punitive damages totaling $145 billion were awarded, but in 2006 the tobacco companies appealed and won. The plaintiffs in the class-action case, the court determined, would have to bring their own individual cases before the court to sue for damages instead.

Some of those cases played out in court right here in Orlando. In October, for instance, 73-year-old Kenny Kerrivan’s case went before a federal judge. Kerrivan tried his first cigarette when he was just 14. By the time he was 17, he was smoking every day. As an adult, he tried to quit multiple times, but found he was simply unable His attorneys argued that’s because the tobacco companies robbed him of free will to quit – something that the companies acknowledge in their internal documents was part of the design of their nicotine-laced product. Today Kerrivan has terminal COPD, a byproduct of his lifelong habit.

Thousands of cases like Kerrivan’s were being duked out in Florida, and the tobacco companies fought them. Hard.

But just last week, a settlement was finally reached – a federal court judge stayed all of the thousands of cases while the parties hammered out the details. The Phillip Morris portion of the case alone is worth more than $42 million. It won’t give Kerrivan his life back, but for many, it’s a step toward justice.