To Replace the Shuttle, a New Space Race 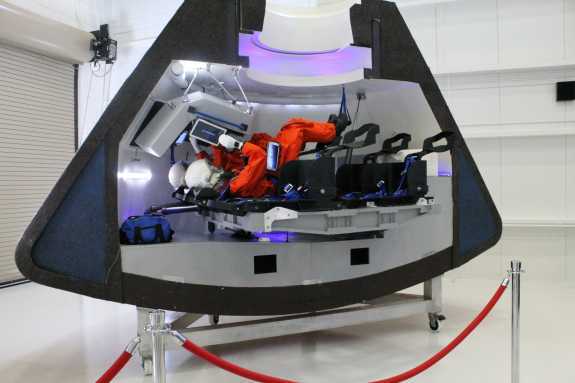 Boeing's CST-100 is one of the space crafts NASA is considering. Photo by Taisha Henry

For the first time in a generation American astronauts will fly into space aboard a new spacecraft beginning in 2017.

But it won’t be a NASA spacecraft. Instead three private space companies are competing to design and build it under a NASA contract.

When NASA announces the winner or winners in a few weeks, it will mark the start of a new era in human space flight.

Boeing’s CST-100 is a compact car of a spacecraft compared with the space truck that was the shuttle. It’s a cone-shaped spacecraft, like a sleek, new Apollo capsule.

It can carry seven astronauts or a combination of astronauts and a small amount of cargo to the International Space Station. But it’s a snug fit. The crew will sit stacked in two rows, the top astronauts’ feet in dangling in the faces of those right below.

Chris Ferguson flew into space three times with the shuttle program and was commander of the final shuttle flight in 2011. Now he’s working on the CST-100’s design.

“But what it brings to the table is a very safe ride to low Earth orbit.”

Boeing is one of three companies vying to replace the shuttle. The others are SpaceX and its Dragon capsule and Sierra Nevada and its Dream Chaser, a kind of mini-shuttle.

NASA wants to get out of the business of flying astronauts to the ISS so it can concentrate on sending astronauts to an asteroid and Mars. The space agency has put $1.6 billion toward its Commercial Crew Program. Since the shuttle program ended American astronauts have flown with Russia. Recent tensions have added urgency to this new space race.

“That was the idea at NASA when it started was to kind of jump-start an industry of private space transportation so these systems could be used not only to carry government astronauts to the space station but to carry private citizens to other destinations.”

A strong front-runner in the Commercial Crew Program is SpaceX’s Dragon. It’s the first private spacecraft to deliver cargo to the ISS. Elon Musk, SpaceX’s chief executive officer, unveiled a new version during a showy media event in May.

A white drape fell away, revealing the black and white capsule bathed in flashing orange and blue light. Smoke curling beneath it made it look as though it was about to launch.

Sierra Nevada’s Dream Chaser resembles a mini shuttle with its white topside, black bottom and curved wings. It is the only spacecraft that, like the shuttle, launches vertically and lands like a plane, but it has received the least amount of funding from NASA.

Boeing and SpaceX each have received more funding. Boeing says it wants to build and maintain the CST-100 at Kennedy Space Center, in an old shuttle maintenance building. That makes it attractive to Florida’s Space Coast.

Each spacecraft is designed to fly astronauts to the ISS, and that’s about it. They are less versatile and can’t carry much cargo. But in computing power they far surpass the shuttle, which was designed about a half-century ago. The computer that controls the CST-100 is 15 times smaller than the shuttle’s and has 50 times the horsepower.

Boeing executive John Elbon compares this new era in human spaceflight to the beginnings of aviation.

“If somebody would have described the U.S. or the world’s commercial airline infrastructure and business as it is today when it first started nobody would have believed it, right?”

For the Space Coast, Logsdon of George Washington University says the spectacle of astronauts rocketing into space will resume, but the region won’t recover the jobs it lost when the shuttle program ended.

“The whole idea is not to need a standing army of 30,000 people to prepare and launch these things but much simpler launch processing.”

NASA Administrator Charlie Bolden says the space agency wants more than one carrier. He says competition holds the cost down.

“It gives us reliability and redundancy. If we only have one U.S. provider then we’re back to where we were before, where we have shuttle and Soyuz, and we know what that’s like. We don’t want to be there.”

But the budget will determine that, and a grid-locked Congress has under-funded the Commercial Crew Program for the past four years.