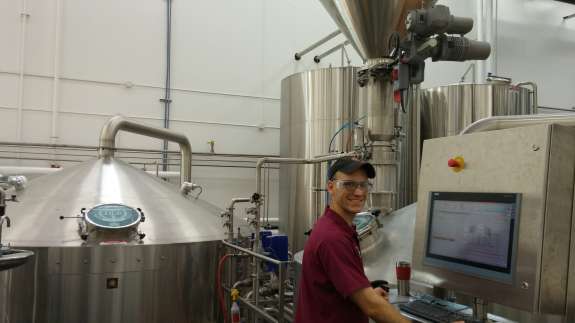 If you drink beer in Central Florida, you’ve probably had Tim Moench’s beer.

He started brewing Orange Blossom Pilsner almost a decade ago, crafting the recipe in his Orlando garage. Beer drinkers will recognize the iconic honey-dipper tap handle, a nod to the local Orange Blossom honey Moench uses in his beer.

Even tourists get a chance to sample his pilsner you can get it at Disney theme parks every now and then.

But you can’t tour Moench’s brewery. That’s because he doesn’t have one. When Moench thought about making the leap from home brewing to craft brewing, Florida didn’t a bustling craft brew scene like out west. And money was tough to come by.

“It takes a lot of money to open up your own brewery. I met with investors before and everything they wanted – I wasn’t pleased with what I would get for my talent and what they would get for their money, it was always lopsided. So I never really started my brewery and thus rented other people’s brewery to make my beer there,” said Moench

The practice is called contract brewing. Moench finds a brewery with the capacity to brew more beer. He gives that brewer his recipe, and they manufacture his product. Moench pays a fee to brew his product there, and he’s responsible for shipping it to his consumers.

Moench’s last contract brewery was in South Carolina. The added cost of shipping his product cut into his bottom line and they couldn’t keep up with the demand for his beer.

For this system to work effectively, breweries need to have the empty tanks to take on more beer. And that’s simply not the case these days. “Back in the day, craft was struggling and there was a lot of empty tanks,” said Moench. “There was a capacity they wanted to fill. And if someone came in and said ‘hey would you make my beer’, they’d look at few empty tanks and say you’re damn right I will! Now craft beer is so big the biggest problem we have is filling our orders.”

It’s an obstacle Bart Watson, Chief Economist of the Brewers Association, recognizes.  “A lot of brewers are running up against capacity constraints especially smaller microbrewers who are growing even faster than the national average. Their production to capacity rating is much tighter, they’re really looking to add capacity in order to grow,” he said.

A New Home for Growing Brewers

The contact brewing model is a small portion of the craft beer market share, and with demand for craft beer steadily increasing, there won’t be empty tanks to rent out.

Former big-beer executive Tim Schoen recognized that issue in the early days of the craft beer boom. He helped create Brew Hub, a soon to be five-location manufacturing plant that brews small-batch beers on a larger scale in what he calls ‘partner brewing’.

The first Brew Hub location is situated about an hour West of Orlando, in Lakeland. And it’s massive – 63,000 square feet and cost upwards of $20 million.

The room smells deliciously sweet as brewers begin boiling huge vats of malted barley to make beer. Brew Hub offers this massive facility to growing brewers – like Tom Moench – to scale up their operations to meet the demands of their customers.

Moench’s Orange Blossom Pilsner is brewed here – along with a variety of other recipes from the brewery. Moench lets Brew Hub take over his operation but keeps a keen eye. The Brew Hub team has Moench in to taste the beer every step of the way. And all of their systems are run by computers. Any partner brewer can check on their product though a smartphone app.

Once you start scaling up like this, quality becomes a concern. But Brew Hub’s Schoen says his team can handle it.

Brew Hub has a beer lab. Technician Sara Ridgeway performs a test to determine the alcohol content of one of their partner beers. “What you are seeing in here is a lab that what we can boastfully say is probably the biggest and best lab in the state of Florida for craft brewing,” he said.

With an increased capacity and a productive bottling line, Orange Blossom Brewery’s business will grow. “We are on a trend to almost triple his business in one year, just by providing him more access to capacity more creativity, more cans, and added brands. His business is on the cusp of blowing up. We couldn’t be happier for him,” said Shoen.

But does Brew Hub walk a fine line between craft beer and the big beer craft lovers shy away from? Shoen doesn’t think so. He says not only will Brew Hub meet the higher demand of local consumers, but they’ll bring in regional favorites that Central Florida beer drinkers may not have had. “At the end of the day, it’s going to be better for consumers because they are going to have better access to better product flow and better access to brands and selections than they ever had,” said Schoen.

That means access to beer like Green Man out of Asheville, North Carolina. Once only available in Western North Carlina, its now available in the Lakeland tasting room. And Shoen says bottles will be on Florida shelves soon.

Back at the bar with Tom Moench, I ask if his customers are worried about his beer changing now that he operates out of Brew Hub.

“It’s got a full lab, a centrifuge, a Ph.D brewer at the helm. Your damn right my beer’s gonna change, and for the better,” he said.

And pretty soon, running out of Moench’s beer will be a thing of the past.