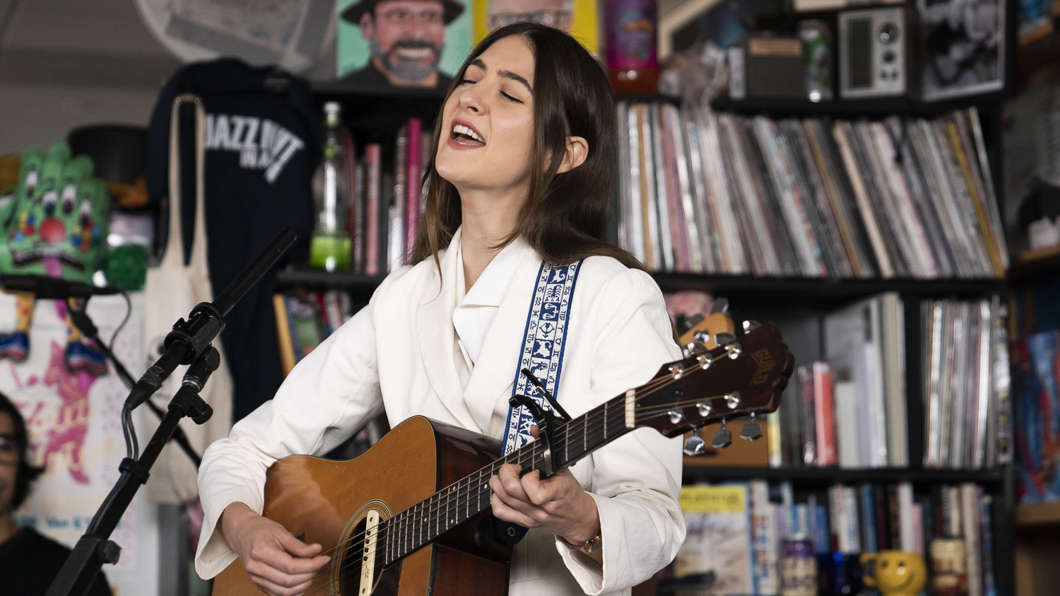 For most of her performance at the Tiny Desk, Nataile Mering, the transfixing voice behind Weyes Blood, sang with her eyes closed, lost and blissed out in the gently sweeping sounds. She didn’t say a word until just before the last song, when she smiled and thanked everyone for coming. But you could feel the warmth and beauty and yearning in what was a tranquil, stirring set.

Mering and the other members of Weyes Blood kept the mix simple and restrained — a strummed guitar, two-part harmonies, a brushed beat — but still managed to re-create the majesty and wonder of the band’s latest release, Titanic Rising, one of 2019’s loftiest and most layered albums. The group played three cuts from the record, opening with “Andromeda,” an astral ode to love, followed by the awestruck “Wild Time” and “Picture Me Better,” a heartbreaking remembrance of a friend who died by suicide while Mering was working on the album.

Much of Weyes Blood’s sound and vibe is rooted in ’70s folk-pop traditions, with mystical themes of rambling on to find meaning and purpose. Mering’s flawless voice recalls Karen Carpenter (though Mering says she doesn’t care much about The Carpenters) and her melodies and progressions channel Joni Mitchell as much as Harry Nilsson. For this performance, Mering wore an all-white suit, a popular style of the era, and played a vintage acoustic Guild she bought “from an old folksinger who had lived in London in the ’70s and played a lot.” But, Mering later wrote in an email, the woman “played her last show, placed her guitar in the case and barely touched it until I bought it in 2016.” Much like the journey of that guitar, Weyes Blood’s appearance at the Tiny Desk was a beautiful trip.