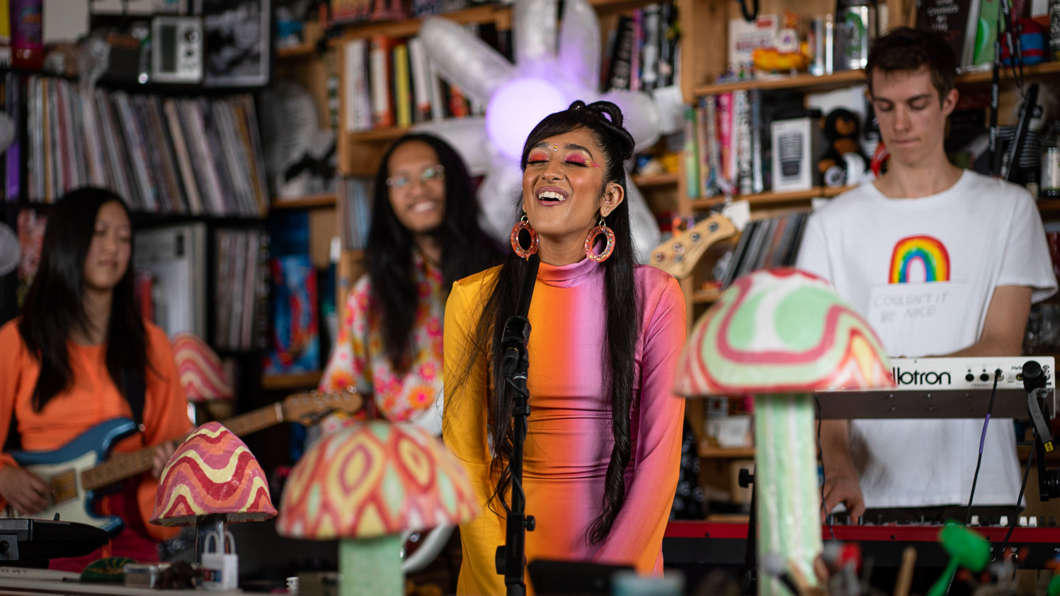 From the moment Raveena Aurora stepped into NPR’s Music Department and looked at the Tiny Desk for the first time, she was ready. The Queens, N.Y. singer-songwriter and her team showed up early (which rarely happens) to meticulously arrange her stage props of homemade mushrooms and flowers, in the already endearingly cluttered space. These extra touches were meant to make clear that this performance would be all about community and safe spaces.

“A lot of my music talks about growing out of these really traumatic experiences,” Raveena told the audience once the cameras started rolling. “And if you’ve ever gone through something similar that I talk about in my music, I just want you to know that in this space that we’re in, you’re extremely, extremely loved.”

As Raveena pulled her audience in with the 2018 fan-favorite single “Honey,” and dreamy standouts from her 2019 debut album, Lucid, a hush fell over the office. Though sweet and soft-spoken, she exudes the confidence and clarity of a seasoned vet. Beyond an astounding vocal ability — the rising star cultivated her range by growing up on Minnie Riperton, Sade and Asha Puthli, India’s ’70s disco queen — it’s Raveena’s precision and charisma that shines brightest within the close quarters of the desk. From a coordinated band rocking a melted creamsicle palette to surrounding themselves with Raveena’s homemade decor, it’s the genuine attention to detail that makes this performance so mesmerizing.