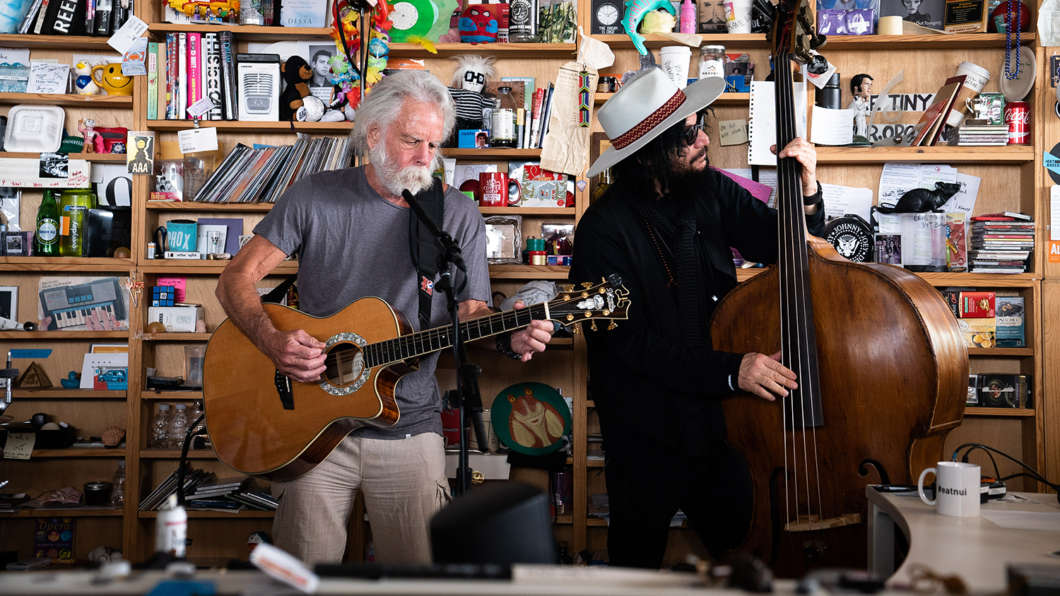 When I produce a Tiny Desk Concert, one of my most important jobs is to make sure they run on time and that the performance sticks to our set time limit (roughly 15-minutes). So when Bob Weir and Wolf Bros achieved lift-off during a pre-show sound-check, it was my unthinkable responsibility to tell the guy who practically invented the jam band to… stop jamming.

Weir is a founding member of Grateful Dead, a band that launched countless jams from 1965 until the death of lead guitarist Jerry Garcia in 1995. And it also fell to me to keep looking at my watch during the performance, even as I realized that my favorite “Dark Star” jams alone lasted well beyond our fifteen-minute performance window. But the magic space behind the Desk has a way of bringing sharp focus to the task at hand, leading to exquisite performances that go well beyond the pale.

Such was the case in this gig by Bobby and his Wolf Bros, Jay Lane (drums) and Don Was (bass), as they played a set that was rich in Grateful Dead lore and that will likely create new memories for the Deadheads who were in the room and beyond.

“Only a River,” from Weir’s 2016 solo album Blue Mountain, feels like a memorial to Jerry Garcia, with a reference to the Shenandoah River, a body of water Garcia famously made reference to on the song, “A Shenandoah Lullaby.” Weir turns the chorus into a mantra and seems to evoke the spirit of his fallen bandmate.

And what would a Grateful Dead-related performance be without a Bob Dylan song? The intimacy of the Tiny Desk turns Weir into a sage Master Storyteller during a version of “When I Paint My Masterpiece” with its reference to Botticelli and a lonely Roman hotel room.

With the addition of special guest, Mikaela Davis on harp, the final stretch of two Hunter-Garcia tunes takes on legendary status. When Weir switches to electric guitar midway during “Bird Song,” I looked at my watch because I knew we were in for some time travel. And the band didn’t disappoint as the rhythmic interplay between Weir and Davis showed off his singular rhythm guitar style, honed from more than thirty years of playing alongside one the most idiosyncratic lead guitarists in modern music.

And I ain’t gonna lie: I teared up at the end of “Ripple,” Grateful Dead’s fifty-year-old sing-along from their album American Beauty. And it wasn’t because of the treat of being just five feet from the action, but because of the song’s celebration of hope and optimism, found in the spirit of all of the band’s music. Bob Weir continues to evoke that spirit every time he picks up a guitar; and as we all sang along at the end, we evoked that spirit too: “Let there be songs, to fill the air.”