TikTok Pivots From Dance Moves To A Racial Justice Movement 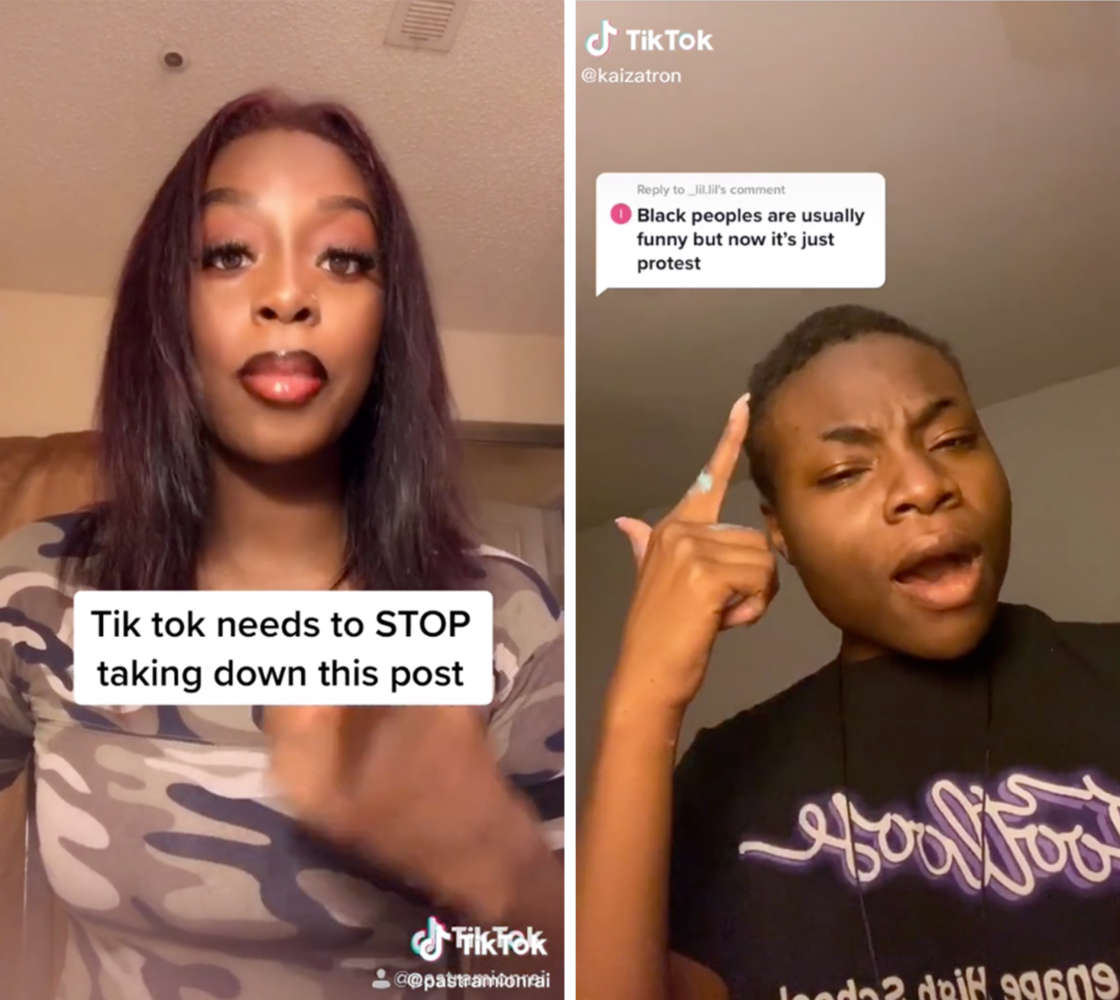 Raisha Doumbia, 20, left and Kai Harris, 17, have turned to TikTok to discuss racial injustice. It comes after TikTok apologized for a "technical glitch" that hid videos related to Black Lives Matter.

When Raisha Doumbia, a 20-year-old swimming instructor in Roswell, Ga., first downloaded the video-sharing app TikTok, she made lighthearted posts, like her lip-syncing and dancing to a song by the British girl group Little Mix.

But Doumbia paused the playful routines after George Floyd was killed by police in Minneapolis. Now she is using her TikTok feed to urge followers to march for racial justice.

“I was just so disgusted that I felt like I needed to say something, so I started to speak out, even though I had like 13 followers,” she said.

Soon, she had more than 60,000 followers as her videos in support of the protests gained traction.

“So many had a blind eye to racial injustice, especially young people who aren’t even being taught about it and their parents aren’t talking about it,” Doumbia said. “So it’s really beneficial for the next generation to be experiencing it on TikTok.”

Advocating for racial justice, 30 seconds at a time

Doumbia is far from alone. Videos with the #blacklivesmatter hashtag have skyrocketed to a top spot on TikTok, accruing more than 6 billion views in recent days. Other popular hashtags include #blackvoices and #blackmusic.

Some prominent white TikTok users are contributing to the movement, like Charli D’Amelio, a 16-year-old TikTok superstar who lives in Norwalk, Conn. She normally posts dance videos. But in the wake of George Floyd’s death, she told her 60 million fans that she was having a somber moment of reflection.

“As a person who has been given the platform to be an influencer, I realized that with that title, I have a job to inform people about the racial inequalities in the world right now,” she said in a recent video.

Analyst Deborah Aho Williamson of eMarketer, who studies social media trends, said many TikTok users are so young that they have yet to reckon with weighty issues like police brutality and racial bias.

“For the first time, they might be exploring how they feel about these issues and being able to do that on TikTok and see other young people who are expressing similar things, I think it’s really valid and valuable,” she said.

Teens and 20-somethings have flocked to TikTok in the two years that it has been available in the U.S. It gained an even bigger following as many people stayed at home because of the coronavirus pandemic. In recent months, TikTok has emerged as the most-downloaded app in the world, outpacing Zoom, WhatsApp and Facebook.

Something can go viral nearly instantaneously on many social media platforms, but TikTok stands out for how rapidly a user can acquire a large following after sharing just a single video that strikes a chord, Aho Williamson noted.

Short and breezy videos that are funny or feature animals or cooking trends typically dominate TikTok, yet national upheaval over systemic racism has tapped into raw emotion that is also deeply resonating.

All of a sudden, TikTok has become the go-to forum for burgeoning youth activism.

“Anger, dismay, disgust and unhappiness are all feelings that can be easily transmitted on a video on Tik Tok,” Aho Williamson said.

Activism arrived on TikTok just as scrutiny of its parent company, the Chinese-owned ByteDance, intensified.

As protests began to sweep the nation, black creators noticed that videos tagged #GeorgeFloyd or #BlackLivesMatter were hard to find, or looked as though no one had watched them despite a torrent of views.

To some users, it was a suspicious development, considering that ByteDance has censored videos of anti-Beijing protests in Hong Kong, in addition to having been exposed for previously suppressing posts from users deemed too unattractive or undesirable for the platform.

TikTok insists that is not what happened in the U.S. In an about-face, the company apologized and blamed the problem on a “technical glitch.”

“Nevertheless, we understand that many assumed this bug to be an intentional act to suppress the experiences and invalidate the emotions felt by the black community. And we know we have work to do to regain and repair that trust,” said Vanessa Pappas, TikTok’s general manager for the U.S.

Doumbia had gained a sizable following from her videos related to the George Floyd protests, although many of her recent posts about police brutality and street demonstrators are being seen by just a sliver of her audience.

It’s a practice that has become known as shadow banning, when TikTok quietly demotes someone’s videos, and black creators like Doumbia feel like the app is targeting them. It is an accusation that has been lodged by many on TikTok, with the hashtag #shadowbanned having received more than 127 million views on the platform.

Doumbia also points to the main feed on the app, known as the For You page. It’s a personalized mix of accounts that a user chooses to follow and videos TikTok thinks they will enjoy based on other videos they’ve liked or watched.

Lately, though, Doumbia said a curious thing has been happening.

She has begun doing videos explaining why she distrusts the app.

A TikTok spokesperson denied to NPR that the company engages in shadow banning but would not discuss engagement on any individual account.

“Like virtually all social platforms, our recommendations take into account users’ preferences based on things like the creators they follow and the videos they engage with,” the TikTok spokesperson said. “TikTok’s systems also work to intersperse recommendations that might fall outside these expressed preferences to give an opportunity to discover new categories of content.”

For some black creators, TikTok is not problem, but rather other users, as unwelcome comments have at times greeted videos about racial inequality and police brutality.

When 17-year-old Kai Harris of Mount Laurel, N.J. posted a video about going to a Black Lives Matter protest, some viewers responded with racist and other offensive comments.

Harris, whos is active in high school theater and has grown her TikTok following of more than 260,000, cannot imagine going back to only making dance videos now. George Floyd’s death has her thinking nonstop about the way police treat black people.

“I do not want to grow up in a world where this keeps happening, so I decided, ‘You know what? I’ve been silent on these issues sometimes. I don’t share my opinions, but I need to share them now,'” she said.

Harris said she remembers when Trayvon Martin was killed in 2012. But back then, she did not grasp the full weight of that moment because she was just 10 years old. Now that she is 17, she’s ready to change some minds — one 30-second TikTok video at a time.

“People are telling me that they’re talking to and calling out their relatives and friends on these issues,” Harris said. “And that’s what I want: for people to understand our emotions and why this is a movement, because we want change and we want the harm to stop.”