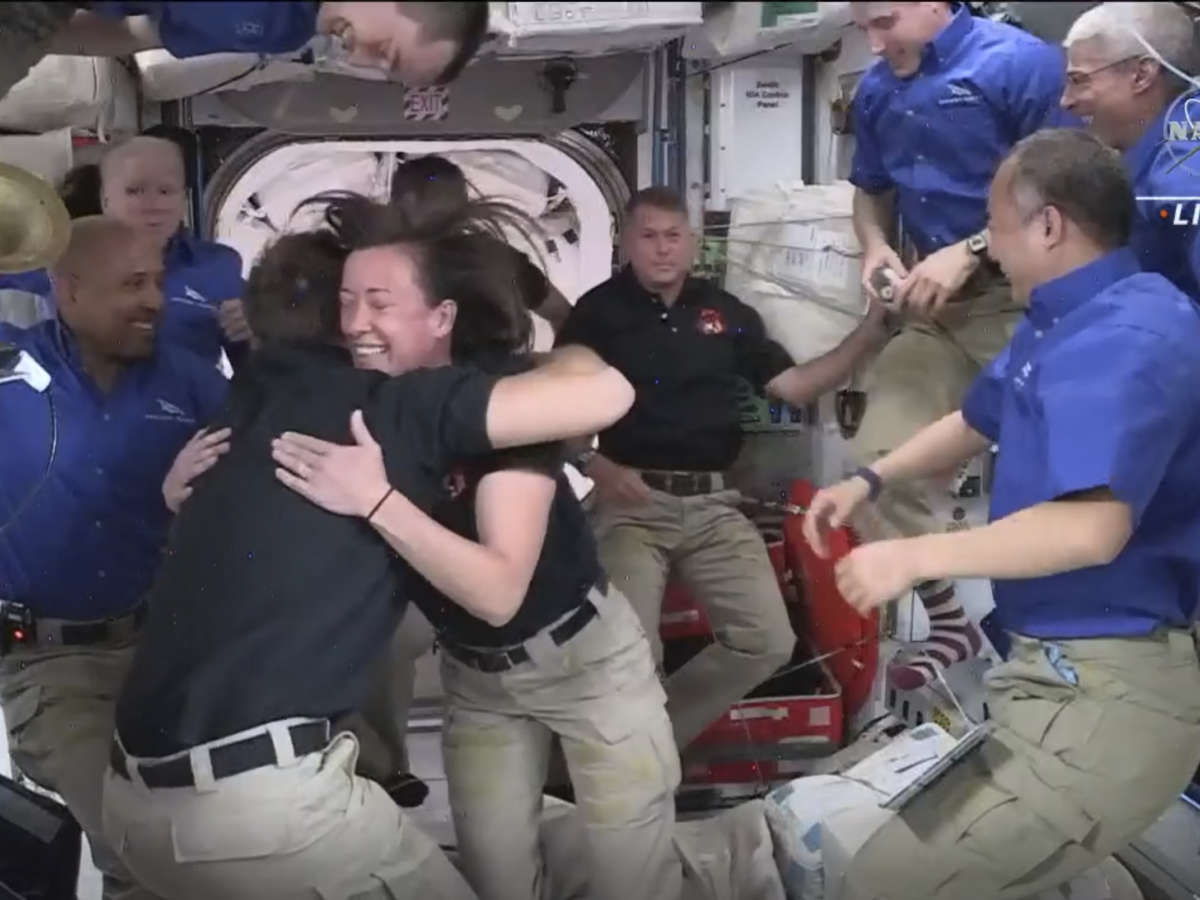 In this image provided by NASA, SpaceX astronauts are greeted by those already aboard the International Space Station after the Dragon capsule successfully docked on Saturday. Their arrival brings the total number of astronauts on the station to a recent high of 11.

A short time later, its four-person crew joined the seven other astronauts already on board the station, exchanging excited hugs in a scene notably free of both gravity and face coverings. Then, in a move more familiar to those of us on Earth, they participated in a formal welcome ceremony over video.

“Man, it is awesome to see the 11 of you on station,” Steve Jurczyk, NASA’s acting administrator, said. “It’s incredible. Congratulations Crew-2 on an amazing launch yesterday.”

The craft docked just after 5 a.m. ET, as part of an elaborate process of linking up with the station that is controlled by the capsule’s on-board computers and can take up to several hours.

Some two hours later, NASA astronauts Megan McArthur and Shane Kimbrough, Japanese astronaut Akihiko Hoshide and European astronaut Thomas Pesquet came aboard the station, where they were greeted by seven other crew members from the U.S., Japan and Russia.

The journey is momentous in more ways than one. It’s the third flight of the Crew Dragon capsule since its inaugural mission last May — which used this exact capsule — and marks the first such reuse of American equipment since the Gemini program of the 1960s.

“We’re just really excited to be here and be part of this historic mission, with the two Dragons on board, the first reuse of a capsule, first reuse of a booster — it’s just a tremendous achievement on behalf of our partner, SpaceX,” McArthur said. “There’s a lot of great science that I know we’re going to be doing, and we’re just excited to learn and get started.”

It also brings the total number of astronauts aboard the station to its highest in recent years, creating some logistical challenges with only three toilets, seven permanent sleeping pods and not much space to move around. Two astronauts will sleep in docked SpaceX capsules, while two will be without beds.

But the overlap will be brief. The four astronauts who came to the station aboard another Crew Dragon capsule in November are set to head back to Earth next week — as the new crew’s six-month mission is just beginning.

“We’re so happy to see our friends — we’re going to have to say goodbye to them soon,” Pesquet said. “We wish we could keep them a little bit longer but not too long as well, because 11 people is a lot on [the] space station. But yeah, it’s good to be here, we’re really impatient and it’s going to be unbelievable.”