Thousands Attend Lakeside Vigil One Week On From Pulse Shootings 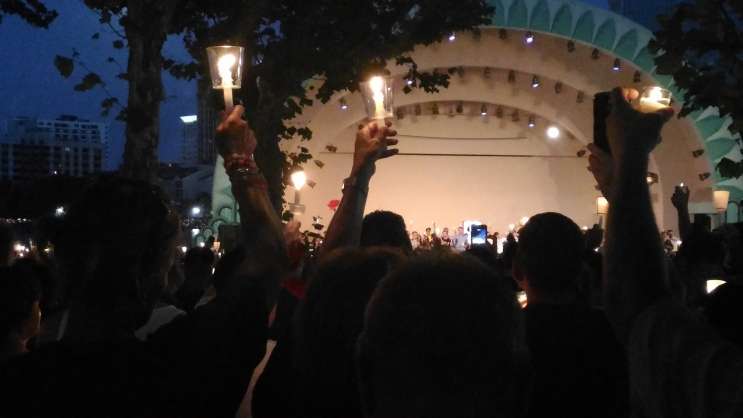 An estimated 50,000 people gathered around Lake Eola Sunday night to remember those killed and injured at the Pulse nightclub shooting.

They lined the lake by the thousand and packed the band shell where city leaders and leaders of the gay and Latino community spoke.

Orlando mayor Buddy Dyer said the city would not be defined by “the hate filled act of a deranged killer.”

“Instead we’re defined by our collective response which has been love, compassion and unity,” he said.

She said the deaths of 49 people at Pulse nightclub last week cannot be in vain.

“When 49 lives were sacrificed and 53 people were wounded and hundreds were traumatized. But this is the moment in time when hearts are opened and minds are changed forever,” said Jacobs.

But she said the world has also seen the best of Orlando in the last week.

“We showed we are a people who love,” said Sheehan.

“Even in the face of despicable hatred we are a people who love.”

As the sun set, the names of the 49 who died were read, and thousands of candles raised high. And as the crowd dispersed candles and flowers were placed at impromptu memorials around the lake.