This Picture Was Taken of the Avalon Middle School Songbirds Before the Pandemic. Here’s How the Choral Program Continues to Safely Bring Music to Seniors with Dementia. 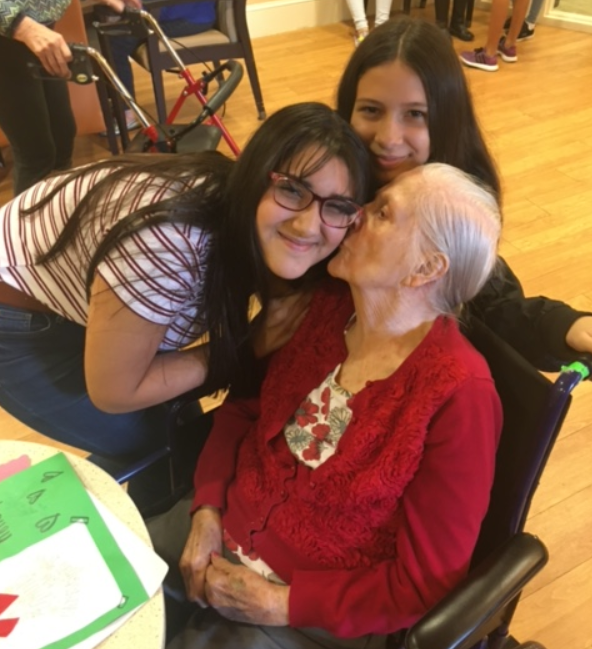 Before the pandemic, students would go in person to Encore at Avalon Park where they would sing songs and share memories with residents.

WMFE spoke with teacher Evan Powers, and 8th grader Bella Carampatan about how participants continue to safely share music together during COVID-19.

Read the full conversation below.

Mr. Powers: Songbirds is my absolute favorite thing that we do. And it’s the best thing that we do as a chorus program. It’s based on the idea of music and memory if you’ve heard of that before. And in music and memory, the goal is to find is to communicate with someone who has dementia, any form of dementia and figure out what music they love and build a playlist for them.

And so what we’ve done, we started the program about five and a half years ago, and we, the first time we did it, it was with “Alive Inside,” if you’ve seen that documentary. It’s a beautiful, beautiful documentary.

And then we took off from there. And so we pair two middle school students with one resident memory care resident at a local assisted living, and we work with Encore at Avalon Park, assisted living for our program. And the first thing that the students do is they’re trained, so the students learn about dementia and how it works.

They learn about how to communicate with people who are going through different stages of dementia, they learn, they watch the movie “Alive Inside,” so they can get a good idea of music and memory, and how that works. And they’re introduced to music from the 40s and the 50s, and the 60s, and they listen to old Hollywood, and they listen to Frank Sinatra.

And we have a handful of songs that we learned together, and we call them our back pocket songs. So things like “Fly Me To The Moon,” and the kids learn those songs, and they memorize them, so that when they meet their residents, they automatically have a song that they can just start singing, and see if the resident will start singing it with them or will start dancing with them.

Bella: Well, it’s really eye opening to see and work with the residents. The person I was paired with. Her name was Pearl, she was an amazing person, so kind and very active. We sing a lot of patriotic songs, church songs.

Overall, when you start singing, she would dance and sing along make hand motions, or just overall have a really nice time. It’s very fun.

Mr. Powers: It really does light up the entire room. When the students are working with the resident other residents will hear and they’ll walk over, they’ll join in, they’ll start conversations with the kids. I mean, it really it lights up anyone, staff members will dance and sing with us. It’s just awesome.

So what we’re doing this year, instead of doing the training program and doing something with small groups of kids, is we’re involving all of the kids in our chorus family and late winter we did a seasonal song sing along. So the kids every class learned two unison winter or holiday songs. And then they actually used Flipgrid and the students had a track playing in their ear.

Bella: I think it was “Oh Hannukah” and I forgot the other one.

And then what I did was I took from each student’s video I just spliced a line out of it. So Bella would sing “Oh, Hanukkah, Hanukkah, come light the menorah,” and then another student would sing the next line.

So I spliced those together so that it’s a single long video that involves as many students as possible and then we put subtitles. This is really important with this age and with dementia. We put subtitles on the bottom that were big enough so that the residents could also read the words of course in case they don’t remember the words.

But also seeing those words helps them to remember the melody a lot of the time and vice versa.

Bella: Well, it felt really nice to know that I’m making people happy. You know, it’s just nice to know. Somewhere in the world, you’re making someone happy and making their day.

Mr. Powers: We’re about to do that again leading up to Valentine’s Day. We’re going to do love songs for seniors and every class is going to learn a song because they’re going to have, Bella doesn’t know this yet. Kids are going to have an opportunity to also record their own like full solo songs if they’d like to do that and I’m going to make another compilation for them.

“Fly Me To The Moon” is going to be one of them by Frank Sinatra. “L-O-V-E” is one that we’re-“L is for the way you look at me.” One of the classes will do that. “In the Still of the Night.”

We’ve heard a lot from the staff about how important it is for the residents just to be able to see youth, to have musical experiences. Not seeing them in person is tough. But if you have someone who’s youthful looking right at you through a camera lens and singing right to you, it can really, really lift the spirits. And we experienced that live, we would walk in, and maybe a resident might be having a really tough day, there were many days where Pearl was having a really tough day, and maybe wasn’t up to making music with us.

Bella: It’s truly amazing how music can help people remember things from earlier times, or just memories and it’s really fun. I also learned how it is to be open to have more social, you know, have to get out of your comfort zone and try something new.

Mr. Powers: We have been working on developing a handbook for this so that other schools can replicate it. When we’re outside of COVID. It is a little bit of prep work. But once it’s going, oh my gosh, it is not only worth it, it will become your heartbeat. It is so important to create experiences like this whatever community you’re in. It can be middle schoolers, it can be in your workplace. If you want to get people involved, that kind of thing. I can’t encourage you enough.