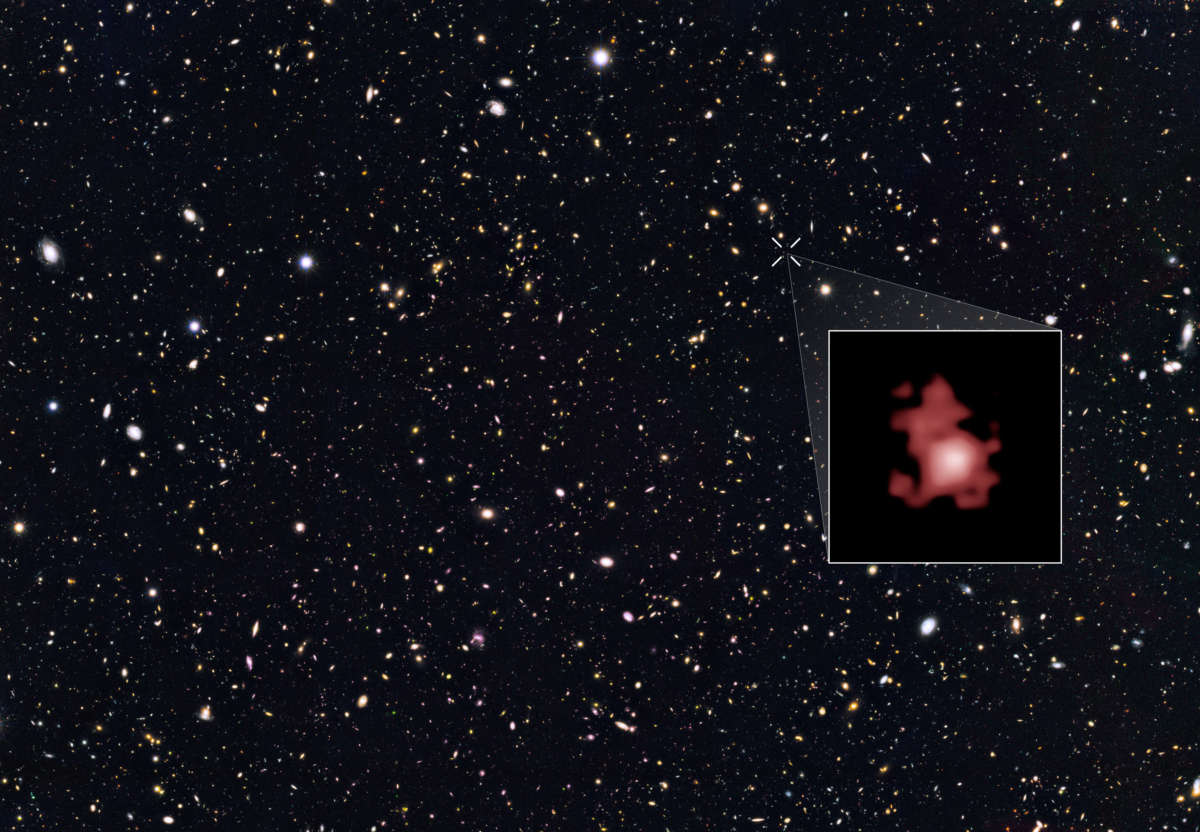 The most distant galaxy ever discovered, GN-z11, is shown within a Hubble Space Telescope deep sky survey and highlighted in the inset. This galaxy existed only 400 million years after the Big Bang.

Imagine knowing nothing about your childhood, nothing about where you came from, and spending years hunting for the answers. Then someone hands you a just-discovered trove of photographs of yourself as an infant. You’d finally be able to scrutinize every detail, searching for clues about yourself and how you came to be the way you are.

That’s just what it will be like for astronomers once a long-anticipated, $10-billion telescope finally blasts off into space in the coming days. If all goes well, it will soon show them what the universe looked like as a newborn, nearly 14 billion years ago.

NASA’s James Webb Space Telescope, the most powerful space telescope ever, is waiting at a launch site in French Guiana. It should be able to detect infrared light from galaxies that are so far away, the light from them has been traveling through space for almost the entire history of the universe.

That means when astronomers detect light from these stars and galaxies, it will be like receiving snapshots in time from the distant past.

“We are trying to build up the story of how the first galaxies ever emerged and how those evolved into galaxies we see today and we live in today,” says Maruša Bradač, an astronomer at the University of California, Davis. “If you don’t get the beginning right, it’s really difficult to figure out what the whole evolution looked like.”

A telescope, or a time machine?

The Milky Way Galaxy is humanity’s home sweet home, but the universe contains hundreds of billions, if not trillions of other galaxies.

To the untrained eye, it looks like a red blob, but “it’s basically like looking back in time about 13.3, 13.4 billion years ago,” says Charlotte Mason, associate professor at the Cosmic Dawn Center of the Niels Bohr Institute and the University of Copenhagen. “That’s just 300, 400 million years after the Big Bang.”

Hubble is limited in how far back in time it can look, so finding this galaxy was kind of a lucky break. Astronomers only spotted it because decades of using Hubble have let them scour much of the sky, and this particular early galaxy is surprisingly bright.

“It’s potentially more massive or is forming stars much more quickly than most theoretical models would predict,” says Mason. “Already, with that one galaxy, we’ve started to question some of our assumptions about how galaxies evolve.”

The James Webb Space Telescope should be able to provide more information about lots of additional galaxies this old and even older, which will help researchers understand how galaxies formed and changed into the familiar shapes and structures seen today.

“We really need much better samples, we need many more galaxies, and we need to step back in time to see how the galaxies are growing,” says Garth Illingworth, an astronomer with the University of California, Santa Cruz.

The James Webb Space Telescope has technology that should let it see back to 100 to 200 million years after the Big Bang.

“So really, the period when we think the very first galaxies formed,” says Mason.

This telescope, which took decades to design and build, also has instruments that will let scientists probe the chemical make-up of the galaxies.

Watching the earliest stars in the universe explode

The “Holy Grail” for scientists who study the early universe is to find light from the very first galaxy, or the very first stars, says Mason. Those first stars would have formed from the elements created by the Big Bang, mainly helium and hydrogen.

“They set the stage for all of the subsequent galaxy and star formation,” says Mason. “They really fundamentally changed their surroundings.”

The odds of seeing those stars with the James Webb Space Telescope, however, are small. “There’s maybe even more of a chance that we might see one of those stars explode,” says Mason.

Those explosions would have spewed out other chemical elements forged in the earliest stars, setting the universe on a course where carbon, oxygen, and other elements ultimately became the building blocks of life.

Illingworth believes that the James Webb Space Telescope won’t be able to see the very first star ever.

“That’s just practically impossible,” he says, adding that even the first little growing galaxies with just a few stars also aren’t likely to be detected.

“But we will go back to the point where we really start to see the galaxies at a very early stage, so that we can trace the whole history, essentially, from then, 200 million years after the Big Bang, through to now,” says Illingworth. “That’s what’s amazing about a telescope like this.”

Humans have long looked up at the skies and tried to make sense of our place in the universe, Mason points out, and the James Webb Space Telescope is the latest step forward in that ancient quest.

“How did we get here? What is the history of our universe that brought us to the point where we can sit here and think about it?” she asks. “To me, that really means starting at the beginning. How did the very first galaxies form in our universe? Because those are really the building blocks of the Milky Way that we live in.”