This Doctor Spread False Information About COVID. She Still Kept Her Medical License 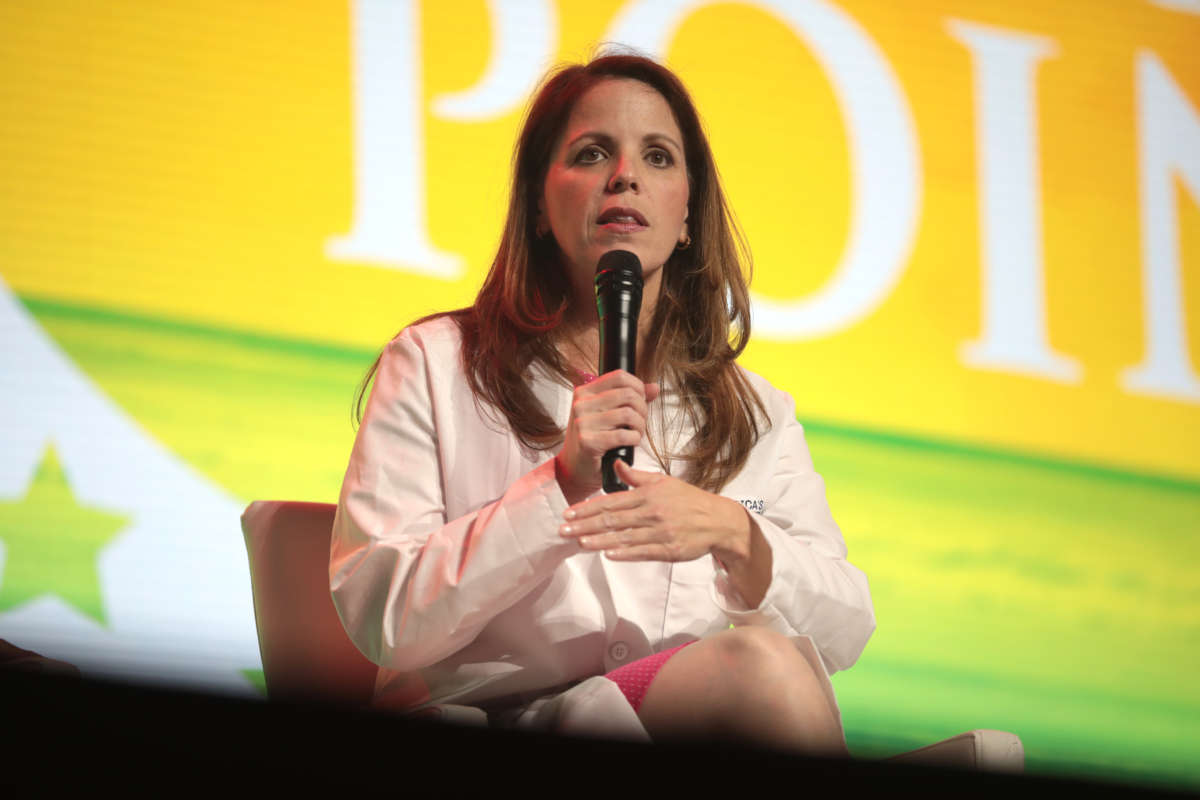 Dr. Simone Gold discourages vaccination against COVID-19 and promotes alternative, unproven therapies. She has spent much of the past year speaking at events like this one held in West Palm Beach, Fla., in December. The conference was aimed at young people ages 15 to 25.

Last month, Dr. Simone Gold stood before a crowd at a conservative church in Thousand Oaks, Calif., and delivered a talk riddled with misinformation. She told people to avoid vaccination against the coronavirus. As an alternative, she pushed drugs that have not been proven effective at treating COVID-19 — drugs that she also offered to prescribe to the audience in exchange for $90 telehealth appointments.

“Don’t text me when you’ve gotten a positive test, I don’t want to hear it,” she said to the gathering. “I’ve told you ahead of time to get the medicines. It can take a week because we’re so swamped.”

Almost everything Gold said in her 45-minute talk was contrary to the best science and medical standards of care for treating COVID-19. But there was one thing she said that was at least partially true: “I am an emergency physician.”

NPR found that Gold’s emergency medicine certification lapsed in December of last year, but she still is, as she claims, a licensed physician in the state of California (her license lists her professional address as a UPS shipping store in Beverly Hills).

Despite more than a year spent spreading misinformation about a pandemic that has killed more than 650,000 Americans, she has what might be considered a professional clean bill of health, with no complaints, disciplinary actions or malpractice lawsuits on her record. The California Medical Board, which oversees her license, told NPR it expects doctors to “follow the standard of care when treating patients at all times.” But the medical board declined to say whether it was investigating Gold, citing reasons of confidentiality.

Gold is not theonly physician promoting misinformation while avoiding professional censure. NPR looked at medical licenses for 16 doctors, including Gold, who have proven track-records of doing so online and in media interviews. Fifteen of the 16 had active licenses in good standing. One appeared to have let his license expire, but there was no suggestion in his record that it was because of any disciplinary action.

Now, some organizations affiliated with medical licensing are encouraging action.

Late last month the American Board of Emergency Medicine, which had until this year certified Gold under her maiden name, Tizes, put out a statement warning it could revoke certification for any of its specialists for spreading “inaccurate information.”

The Federation of State Medical Boards issued a statement in late July warning that “Physicians who generate and spread COVID-19 vaccine misinformation or disinformation are risking disciplinary action by state medical boards, including the suspension or revocation of their medical license.”

Why professional censure has lagged

So, why hasn’t more punitive action already been taken?At its heart, the problem is the fragmented medical licensing system in the United States. Individual states have licensing boards made up of a mix of doctors, lawyers and private citizens. These boards, with an eye toward medical malpractice, usually respond only to complaints against individual physicians.

“People assume that licensing boards are on the lookout, they’re on the internet,” says Dr. Humayun Chaudhry, president of the Federation of State Medical Boards. “They actually don’t have the resources — neither the money nor the manpower — to monitor what happens on the Internet or social media.”

In the absence of oversight, doctors such as Gold have been able to spread misinformation with impunity. Imran Ahmed, chief executive of the Center for Countering Digital Hate, which tracks vaccine misinformation online, says that even though the number of doctors involved in spreading this sort of bad information is tiny, they’re having an outsized influence. Other people in the anti-vaccine movement promote their posts “because they have the ‘Dr.’ before their name and they appear to understand what they’re talking about.”

Ahmed says that having a medical degree may also be helping these doctors skirt social media bans on coronavirus misinformation. “We will find that social media companies will hide behind any excuse that they can to leave up [the profiles of] those people spreading misinformation, and one of the excuses they use is citing their medical credentials,” Ahmed says.

A few doctors with bad information have been given big megaphones

In fact, while other promoters of bad information saw their Twitter profiles suspended this summer, Gold has seen her followers swell to more than 300,000. And it’s not just happening via social media: Doctors who discourage vaccination have found regular spots on conservative radio and TV talk shows and on cable networks. Among the most prominent promoters of this brand of false information is former Trump strategist Steve Bannon, who regularly interviews a small, rotating cast of these physicians on his talk show.

The misinformation — which usually involves inflating the risks of vaccines and offering the false promise of alternative therapies — is coming as cases of COVID-19 surge nationwide, mainly in areas with low rates of vaccination. Other doctors working in those places are understandably frustrated.

“We would like there to be some easy answer out there, some medication that’s been around forever that we could just take from home,” says Sonja Rasmussen, a pediatrician and epidemiologist at the University of Florida in Gainesville.The problem, she says, is that, so far, the alternative therapies, such as ivermectin and hydroxychloroquine, have not been proven effective against COVID-19.

In reality, ICUs are packed with sick, unvaccinated people

“There are outliers out there who are preaching nonsense,” says Dr. Kendall McKenzie, the chair of the department of emergency medicine at the University of Mississippi Medical Center in Jacksonville. While Gold has been giving talks to packed audiences, McKenzie has been dealing with packed ICUs filled with sick, unvaccinated people. He says he sees patients every day being influenced by the kind of misinformation that Gold and others are promoting.

“What it’s doing is filling up my emergency department with intubated patients, and ultimately leading to deaths,” he says.

Chaudhry says there have been some recent cases where disciplinary action has moved forward. In May, the Oregon Medical Board suspended the license of a doctor for encouraging patients to go unmasked, and Hawaii’s medical board is pursuing a complaint against a state health official and a physician, both of whom are reportedly promoting alternative therapies for treating COVID-19 — alternatives that federal agencies have specifically warned are not helpful and can sometimes be harmful.

Chaudhry thinks many licensing boards may already be conducting additional confidential investigations against doctors promoting misinformation. Those investigations, he adds, are typically only triggered by a complaint, but the complaint can come from anyone. “People don’t realize it doesn’t have to be the patient themselves. It can be a patient’s family member; it can be another doctor,” he says.

Gold has new problems: She participated in the Jan. 6 insurrection at the U.S. Capitol and is now awaiting trial on criminal charges for forcing her way into the building and engaging in disorderly behavior. She has pleaded not guilty and through her lawyer declined NPR’s request for an interview.

While she awaits trial, Gold continues to give talks as a fully licensed physician.