This Dad is Fighting to Keep His Room at the Star Motel: “I Cannot Have My Four Young Kids Out On The Streets” 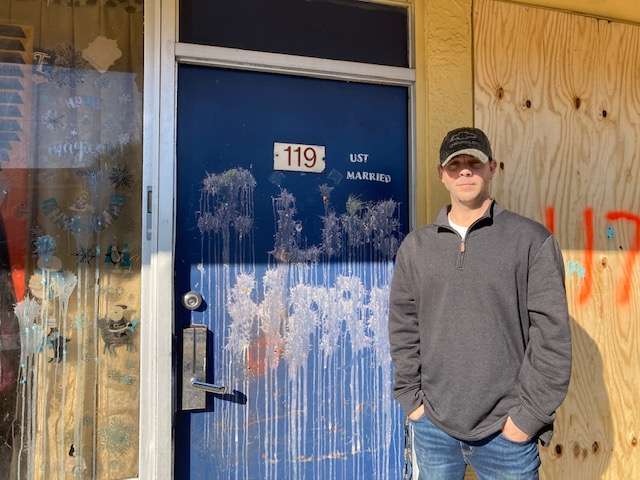 Osceola County has started to try to board up rooms that residents are still living in at the Star Motel in Kissimmee.

Willie, a veteran and mechanic at the Star, had his room boarded up yesterday. Photo: Mike Beaver

Room 119 has a sticker on it that says “Just Married.” It’s where Jeremy Decker and his wife and four young children have lived for the past two years.

Decker stayed behind after moving the rest of his family to another motel with the help of The Community Hope Center. But he says if something falls through at the other motel, he wants to make sure their room at the Star Motel is still available.

That’s getting harder with code enforcement trying to board up the room and telling him “there’s no one living here” on the daily.

“I cannot have my four young kids out on the streets. Not in this area. This area is backdoor Downtown Disney. Happiest place on Earth. But it’s got a very ghetto dark side to it. There’s no shelters here. There’s no nothing here.”

A few doors down, Donald Fisher has a similar story. He’s an ex-felon whose mandated to stay at the Star Motel because of his criminal background.

Donald Fisher has started living out of his car. Photo: Danielle Prieur

Yet he says that same record makes it hard for him to qualify for housing assistance through The Community Hope Center and other government agencies.

“Most of the hotels don’t want to take somebody with my background. And on top of that me and my wife have even researched the fact of HUD housing and Section 8. But because we’re a couple and my background, we do not qualify for Section 8 or HUD housing. So it makes it extremely difficult.”

Fisher says without the Star Motel, he’s not sure where he’ll go either. He’s already started to live out of his car and his wife and young children are living with friends elsewhere.

The county says rooms that the property manager claimed were occupied, did not appear in any condition for a person to occupy safely and that staff is continuing to offer help for these residents so they can find safe places.