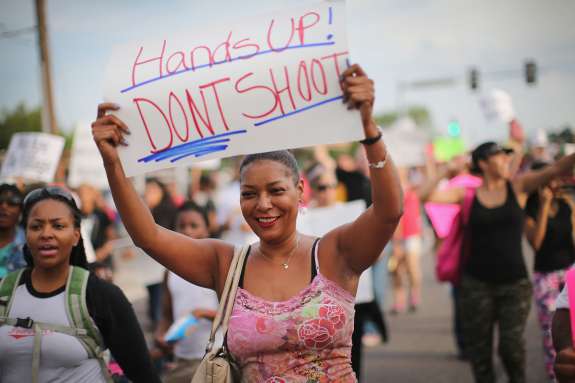 Protests against the police shooting and killing of teenager Michael Brown had a different feel Thursday in Ferguson, Missouri. Police scaled back their military-style operations and instead walked with protesters.
Image credit: Scott Olson

Ferguson, Mo., saw more protests last night – but instead of meeting demonstrators with tear gas and armored vehicles, police walked with them, and posed for photos. The shift came after days of clashes sparked by the police killing of unarmed black teenager Michael Brown.

“There was no line of armored trucks or police in riot gear blocking traffic Thursday night. The few police officers spotted in the crowd were wearing regular uniforms.
“Gov. Jay Nixon placed Missouri State Highway Patrol Capt. Ron Johnson in charge on Thursday afternoon, instead of the St. Louis County police. The result was an atmosphere that felt more like a party.
“Protester Dante Kelly hoped the night was a tipping point.
“‘But it’s only a start,’ he said. ‘Captain Johnson is not going to be here forever, so, ain’t no telling.'”
“Other protesters shared Kelly’s skepticism that the change would be permanent. And many expressed their frustration that the police had not yet released the name of the shooter.”

There have been reports that officials on Friday might reveal the name of the officer who shot and killed Brown, 18. This week, Ferguson Police Chief Thomas Jackson has said he didn’t want to identify the officer, citing death threats.

The investigation into Brown’s death is continuing, and on several fronts. Soon after the shooting, Jackson asked the St. Louis County police to handle the inquiry; the FBI and Justice Department are also conducting their own investigation.

But the key difference in Ferguson Thursday was that police had changed their approach to trying to prevent a repeat of the violence and property damage that occurred Sunday. Police were heavily criticized for using tear gas, deploying heavy weapons and arresting journalists.

“They made it look like they were over in Iraq, ready to attack us,” protester Marquess Mull tells NPR’s Cheryl Corley. But Thursday was different, he said: “They’re talking to people.”

The new commander, Johnson, is a Ferguson native who is also black. He and Jackson had both said that police would change both their tactics and their appearance, in an effort to avoid provoking protesters. The military-style gear and the gas masks would be stowed, they said.

Johnson kept that promise last night, walking with demonstrators, hugging people, and representing authority in a way that’s been absent this week. The community responded with a spirited demonstration that was marked by cheers and the honking horns of passing cars.

One woman told Johnson, “Thank you so much for coming out here tonight,” according to The Washington Post’s Wesley Lowery.

This week, scenes of grief and confrontation in Ferguson have further stoked racial tensions in the town that’s two-thirds black, and the images and stories have resonated far beyond the town.

In a show of solidarity, thousands of protesters in New York, Washington, and other cities held their own demonstrations last night, chanting the phrase that has rung through Ferguson’s streets this week: “Hands up, don’t shoot,” a reference to witnesses’ claims that Brown had his hands up when he was fatally shot Saturday.

In Ferguson, the new tone was indicated most simply, and perhaps most adorably, by a Thomas the Train parade vehicle that plied the same streets where armored vehicles had recently roamed. It carried a group of smiling young men.