They didn’t plan to be a family of 17. Then, the opioid crisis hit their community 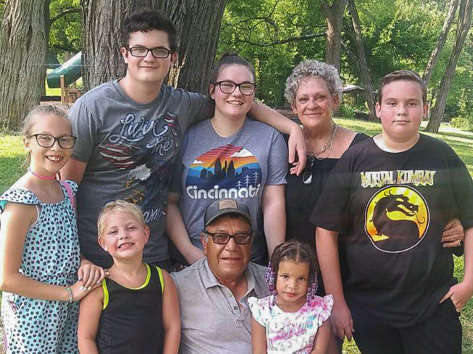 Jesus and Suzanne, seen with their adopted children in Art Van Atta Park, in Dayton, Ohio, in July 2021.

When opioid addiction began to ravage Suzanne and Jesus Valle’s Ohio community more than two decades ago, the husband and wife saw another crisis unfolding.

In Blue Creek, Ohio, one of the hardest hit areas in the country’s opioid epidemic, children whose parents had become addicted to pain pills, heroin and other opioids were becoming the invisible casualties of the crisis.

So, the Valles stepped in to help.

From 2007 to 2018, they had taken in six children, all from Ohio families struggling with addiction, including their own. Four are the kids of Suzanne’s brother, and two kids came through the foster care system. They had already raised nine of their own, biological children.

Suzanne and Jesus spoke during a StoryCorps conversation in 2017 about what they said was an unexpected yet ultimately rewarding undertaking.

“I always like to tell everybody we raised yours, mine, ours, my brother’s, now others,” Suzanne said.

“We have told the children that their parents do love them, but they are not able to take care of them.”

Even so, that was never part of the Valles’ plan. Suzanne and Jesus thought they would be empty-nesters indulging in their love of travel.

“But I don’t know if we would be as happy without all these kids,” said Suzanne. “Kids bring happiness.”

The couple, both 62 years old at the time, said they worried about their ability to take care of their children as they got older. Their kids range in age from 3 to 17.

“But if we can encourage every kid to help each other, I don’t think we have anything to worry about,” Jesus said.

The Valles recently moved to Inglis, Fla. Meanwhile, Blue Creek remains a hot spot in the country’s opioid epidemic, according to recent data. A May study, using data from the Centers for Disease Control and Prevention, identified the southern Ohio town as belonging to one of 25 regions in the U.S. with disproportionately high rates of fatal opioid overdoses.

Over the last year, the pandemic accelerated drug abuse. During the heaviest months, more than 100,000 people died from overdoses in a 12-month period — a record experts say is driven in part by the spread of fentanyl, a potent synthetic opioid.

The opioid crisis has strained child welfare systems in recent years, as kids who often face neglect and abuse are taken from their families and put into foster care.

In July, the Valles finalized the adoption of the last two kids they took in.

Raising six children is far from easy, Suzanne said. But having the support of her husband made it a little bit easier.

“You always were right there by my side for those decisions to take on more children, to raise them,” she told him. “And you’ve really done that unselfishly, Jesus.”

Jesus wouldn’t have had it any other way.

“I never expect anybody to praise me for what I do,” Jesus said. “Things change, but I don’t mind because I think we did the right thing.”