They Came To The U.S. As Afghan Refugees. Now They Hope Their Story Will Help Others 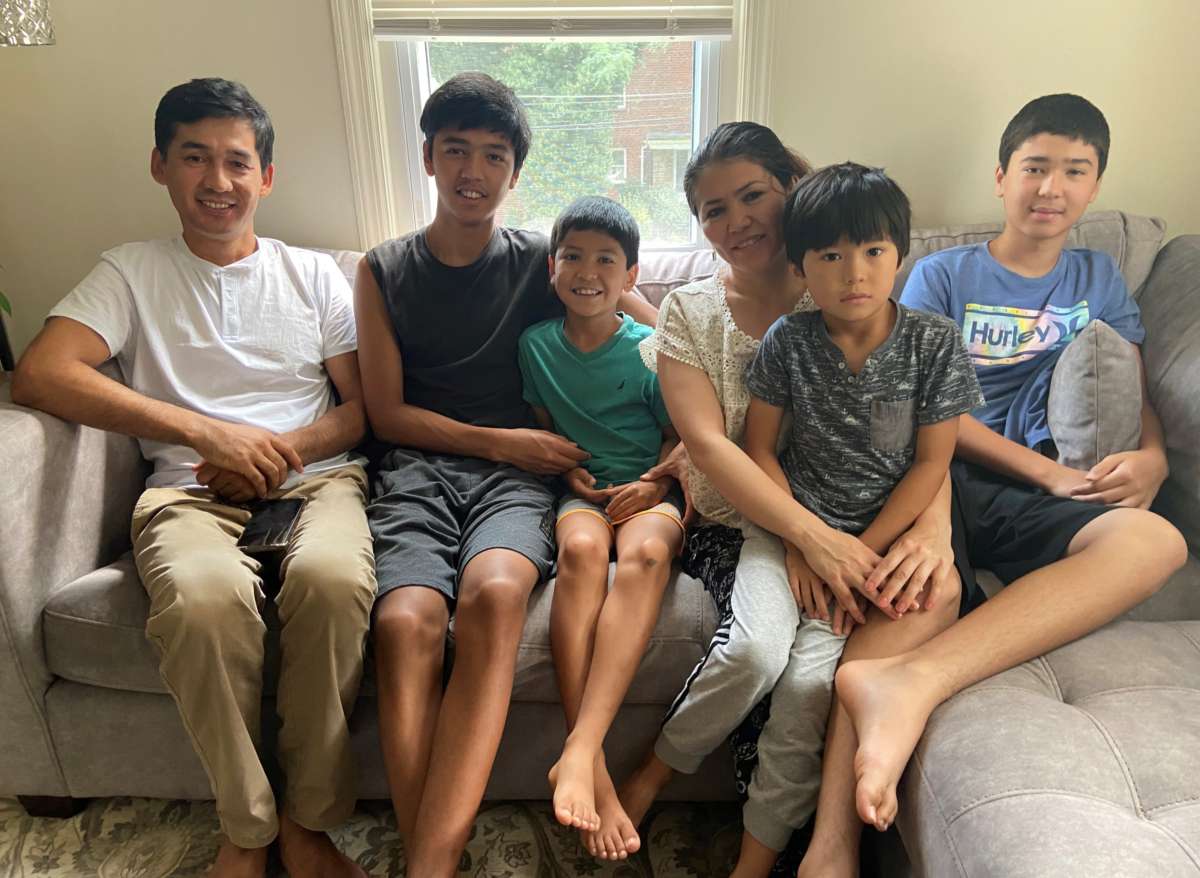 Hossein Mahrammi, his wife, Razia Mahrami, and their four sons came from Kabul to the U.S. on a Special Immigrant Visa or SIV in March 2017.

Scenes of violence in Afghanistan triggered painful memories for Hossein Mahrammi and his wife, Razia Mahrami, refugees living in the U.S. He sees the hope of a democratic, peaceful Afghanistan vanishing as the Taliban take over the country and the future of family and friends there uncertain. The couple know all too well the hardships that await the thousands of refugees fleeing.

“What we are watching in the news is real to us,” Mahrammi says referring to the gruesome scenes of people desperately trying to leave his home country and the massive attack at the Kabul Airport.

The rapid withdrawal of American armed forces from Afghanistan brings out a mixture of feelings, the couple say — pain, helplessness, stress, anxiety. They worry to death about those trapped in their country and at times they feel guilty because they are safe here in America — Mahrammi says he often asks himself, “Why am I here?” while Mahrami nods in agreement.

Sitting in their sunlit living room one recent morning, Mahrammi and Mahrami reflect on the news from their homeland. The couple and their four boys, ages 2 to 12 then, arrived from Kabul in March 2017 to the Washington, D.C., area, with suitcases stuffed with few belongings, including their beloved hand-woven Afghan rugs.

Mahrammi, a trained economist, worked with the U.S. government in Kabul for more than a decade and received a Special Immigrant Visa. He feared for his family’s safety, he says, not only because of the work he did, but because the family is Hazara Shiite, a minority ethnic group that’s been highly persecuted by the Taliban.

After these past four years in the U.S., the family is doing well. Mahrami, 42, is studying for a business degree at a local college and she has learned to drive, the boys are thriving and the family has moved from a small cramped apartment to a bigger more comfortable place. While Mahrammi says that starting a new life in the U.S. hasn’t been easy at times, they’ve embraced the culture and customs of their new country.

Their eldest son, Shahid, a tall, lanky 17-year-old with an easy smile, sits silently between his parents. He has vivid memories of attending school in Kabul, where he says he left behind a lot of friends.

“I think about them, my uncles, aunts, cousins. What’s going to happen to them?” He softly answers his own question, “I don’t really know.”

Family and friends in Afghanistan count on their kin in the U.S. for help to escape

Last month President Biden announced that U.S. and NATO ally troops would leave Afghanistan by Aug. 31 and the withdrawal proceeded.

“Since the day the Taliban entered Kabul, I’ve had no sleep,” Mahrammi says, adding that he’s consulted a neurologist for help. While he speaks, he alternates between holding his phone to keep an eye on the news and caressing a Tasbeh or prayer beads in his hand, “It helps me relax and focus,” he says.

Suddenly his phone beeps and after glancing at it, Mahrammi closes his eyes and sighs quietly. It’s the news of a massive explosion at the Kabul airport that killed at least 13 U.S. troops and nearly 200 Afghan civilians.

“We know our families are hunkering down,” and that gives the couple some peace of mind, he says.

“I am worried about the thousands and thousands of those who worked hard in the last 20 years for a better future,” says the soft-spoken 48-year-old Mahrammi, “but in return, they get the darkest, the most unexpected and unwanted situation.”

The Taliban rapidly regained control of Kabul, and effectively the entire country on Aug.15, after only a few weeks of fighting and when former Afghan president Ashraf Ghani fled the country.

The Taliban sheltered Osama bin Laden as he was plotting the Sept. 11 attacks in U.S. soil in 2001 and it had previously ruled Afghanistan from 1996 until the U.S. invaded the country searching for bin Laden after the terrorist attacks.

Mahrammi and Mahrami say family and friends in Afghanistan count on them for help to escape.

“It’s 10:30 in the morning,” says Mahrammi glancing at the wall clock, “and I’ve had five phone calls already with my brothers and my father.” He says he listens quietly to their hardships, “we don’t have any income, no job. Nothing,” his relatives tell him. Mahrammi says he tries to give them hope, “I’m still here for you,” he reassures them.

How to make the resettlement process for refugees better

NPR first interviewed Hossein Mahrammi within a week of his arrival in 2017. In the following months, his wife says, she questioned their decision to flee their country, “Why did we come here? Life is so difficult,” she remembers asking herself and her husband. Razia Mahrami’s English was limited and she missed her family terribly, money was tight and their future uncertain.

One of their boys had to have surgery soon after they arrived, she says. The couple received a bill for $37,920.00 for a three-day hospitalization. “It was very stressful,” Mahrammi says. “We had nothing, no insurance. We don’t know the rules, we are so new here.” Eventually the bill was covered by Medicaid.

Hossein Mahrammi struggled to find a job and after originally telling himself that driving Uber was beneath him, he had to be humble. But to drive for Uber he needed a car. To buy a car he needed a loan.

“I was struggling,” he says, “nobody has enough cash and I didn’t have credit [history,]” it took him many months to finally secure a loan with the help of a co-signer, an Afghan friend with a solid credit history who came to the U.S. years before Mahrammi did, he says.

“The resettlement process could be better,” Mahrammi says. He adds he’s grateful for the federal assistance the family got for several months of rent, the help enrolling the children in schools and guidance to get their social security cards, but his family at times felt lost, he says.

The U.S. government has contracts with nine NGOs to resettle refugees and their mandate is narrow — primarily, to house refugees and enroll kids in school. But some agencies also provide other help, like food or clothing, as well.

Mahrammi says that he’d welcome a financial literacy workshop and even a class about American cultural norms, would be helpful, he says.

“In Afghanistan it’s very important that you don’t look at someone’s wife, don’t talk to people you don’t know,” Mahrammi says, “but here, you’re expected to say ‘good morning’ to strangers, regardless of gender, when you enter an elevator or a building or at the park.” Small talk is part of American culture, not so much in Afghanistan, he says.

The challenges the family has overcome are nothing, Mahrammi insists, compared to what people in Afghanistan go through, and then, he says, the positives, from big to small, are so much greater than the challenges.

“Walking my kids to school and knowing that they are getting a world-class education,” is a great feeling, Mahrammi says. He also notes that the family has medical insurance now. Plus, “I’m not worried that my wife walks outside by herself,” he says. “From the very bottom of my heart, I feel relaxed and blessed and happy.”

The family offers some tips for newly arrived refugees

The SIV visa the family came on automatically turned into a green card, allowing each member of the family to become a lawful U.S. permanent resident soon after arriving in the U.S. When the family hits their fifth year residency anniversary come March 2022, they will be eligible to apply for U.S. citizenship. “We’ll apply immediately,” Mahrammi says with a big smile on his face.

After years of juggling multiple jobs, Mahrammi is now a technical advisor for a local nonprofit, Enterprise Development Group, that provides micro loans to low-income individuals.

The Mahrammi kids ages 6 to 17 are all in school and exceling – their English is perfect.

Shahid is a rising junior and says that he doesn’t know what he’ll study in college or what college he’ll attend yet, but he’s certain of one thing, “I’ll have a lot of choices here.”

The family has many plans. The mom dreams of opening an Afghan food restaurant after finishing school and the couple wants to buy a home. Then there is college for the boys who are already thinking about scholarships, “There is a very bright future waiting for us,” Mahrammi says.

He and his wife say that hearing news of the thousands of new refugees arriving in the U.S. stirs hardship memories for them because resettling in a new country can be painful, and even disorienting, they say, it forces people to start from the ground up and it makes you question whether your decision to leave your country was the right one.

They offer some advice for newly arrived refugees.

“Be flexible, be open-minded, take risks,” Mahrammi says. He cautions new refugees to lower their expectations, “It doesn’t matter the type of work you do, just work hard and keep going,” he says. “This is the land of opportunity.”

The couple is helping organize volunteers and donations for the thousands of refuges arriving at Dulles International Airport in Virginia.