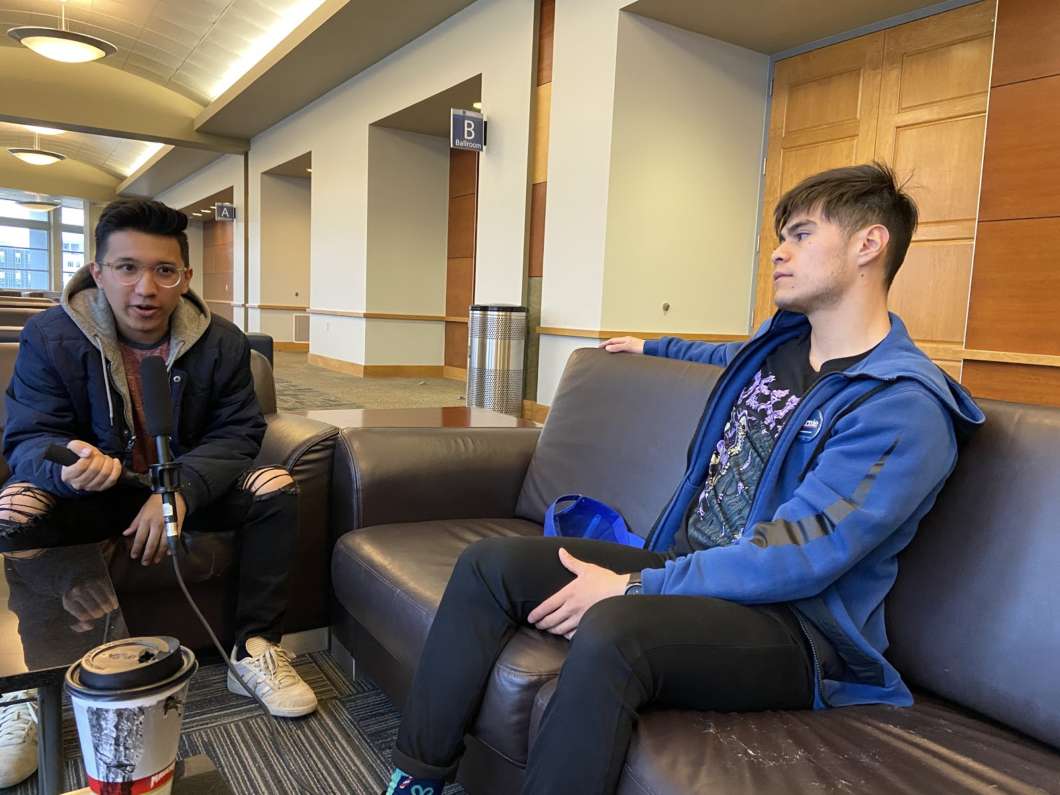 Andre Anaya (left) and Chris Torres share their thoughts on the election and life as a Latino in America. Credit: Noah Glick, KUNR

As Nevadans get ready to caucus this weekend, the nation should be paying attention. That’s because unlike Iowa and New Hampshire, where the first caucus and primary were held, respectively, Nevada’s population more closely mirrors the U.S. According to the U.S. Census, almost one-third of the state is Hispanic or Latino.

Nevada, like much of the West, also skews slightly younger. So, ahead of the Saturday caucuses, we talked with three Latino college students in Northern Nevada. They all say they plan to vote, but feeling like their voices matter is a challenge.

Here’s what they shared about some major issues they face in their lives.

Andre Anaya is a sophomore at the University of Nevada, Reno. He said there are many misconceptions about his community.

Anaya is half-Mexican and half-Salvadoran.

Chris Torres, a senior at UNR, agreed. His parents are from Mexico.

“Latino people come from far and wide and really just kind of putting everyone in that box really diminishes the amount of voice there is there,” Torres said.

Junior Nestor Lopez said he gets asked all the time, “What part of Mexico are you from?”

The students say most of the Latinos they know work to pay for their own college education, which isn’t all that unusual. But they say most Latinos also work to help pay family bills.

Torres said he’s lived in the same house with his mom for more than 12 years.

To help pay rent, he took on a second job. That, at least temporarily, cost him his Medicaid coverage.

“I’ll lose the health care, that was my kind of way of living. I was just like, ‘You know, I’m making more money, so I guess if something were to come happen, maybe I’ll be ok,’” he said.

After a lengthy appeal process, Torres eventually got his coverage back. Lopez, the sophomore, doesn’t have health insurance. But that isn’t as pressing as another contentious issue: immigration.

“My mom, she received a letter a long time ago from immigration,” he said. “We know where you live. You need to move, or we’re going to deport you. And we legit had to find another apartment.”

All of these students know friends and family who’ve been affected in this way. But for Anaya, there’s something else on his mind that’s becoming more critical.

“What concerns me about the country is a push to a dehumanization of Latinos,” he said.

That push he said is coming from politicians and even the President.

“And that, in turn, causes their supporters to then have those opinions and then that influences their interactions with Latinos,” he said. “And it hurts. It hurts the community.”

Lopez said the Latino community as a whole is misrepresented.

“A lot of Latinos struggle,” he said. “Working hard jobs, their kids speaking Spanish at home, English at school. And I just want them to understand that not all Latinos are bad. We don’t all sell drugs.”

But negative perceptions about the community persist. And that, he said, blocks many people from sharing their opinions — or even voting — for fear of being misunderstood or harassed.

“I think one of the things that hinders them from voting or from sharing their experiences, thinking that my voice doesn’t matter, when in reality it does,” Lopez said.

Glick reached out to Latino college students in this community because they are a key voting bloc in the 2020 election.