These Students Grew Up Around Gun Violence. They Decided It Was Time To Talk About It. 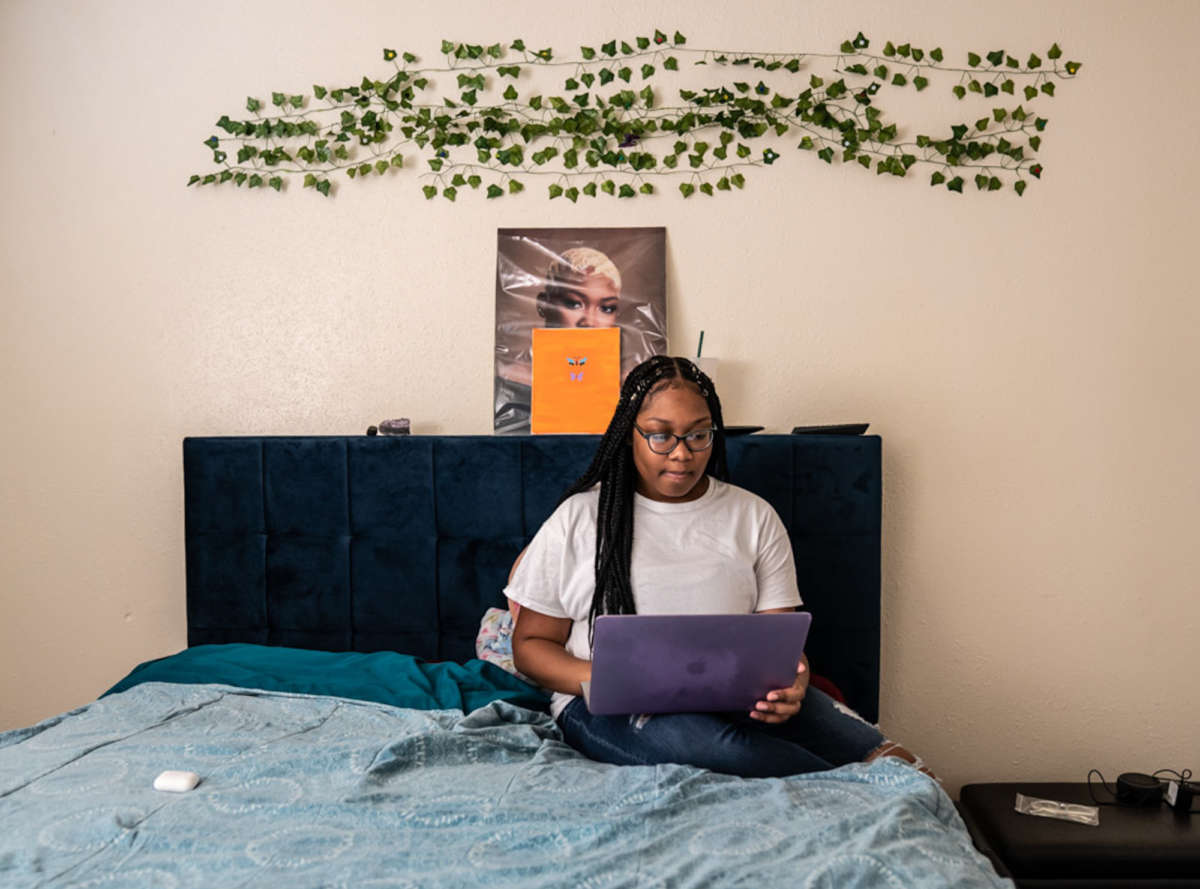 Makiyah Hicks and Jonetta Harrison in front of their high school, Duke Ellington School of the Arts, in Washington, D.C. They are finalists in this year's NPR Student Podcast Challenge for their entry "Loss and Transformation."

When Makiyah Hicks was young, her uncle, Jamal Hazel, was killed in her District Heights neighborhood in southwest Maryland. Her father lost a brother and her grandmother, Darlene Hazel, lost her youngest son.

Every year since, on her uncle’s birthday, Makiyah and her family visit his grave.

Despite the traumatic loss, she says her family and community members mostly avoid conversations about gun violence.

“It was always something we were around, but not something that was talked about,” says Hicks, who graduated this year from Washington’s Duke Ellington School of the Arts. “Especially with regards to my grandmother. That was her youngest son. It’s a bit of a touchy subject.”

So Hicks, along with her classmates Jonetta Harrison and Quin Wells, decided to talk about it. The students, all recent graduates of the Duke Ellington School, made a podcast about gun violence in D.C., and how families of victims are shaped by the loss. Their teacher, Thom Woodward, entered it in NPR’s Student Podcast Challenge, and their story is one of 10 high school finalists, chosen by our judges from more than 2,200 entries.

As part of the podcast, Hicks interviewed her grandmother, and they talked about the death of Jamal Hazel for the first time. “It’s all for a cause when things occur in life that you don’t anticipate or expect to happen to you,” her grandmother tells her.

The conversation, Hicks says, was a breakthrough after so much silence: “It’s hard to find a light at the end of the tunnel,” she says of her grief. But when she spoke about it with her grandmother, “for a second, it was there. It was something.”

D.C. has long struggled with one of the highest rates of gun violence in the country. The district saw 198 homicides in 2020, a 16-year-high, and the 2021 homicide rate is already outpacing 2020.

Harrison, Hicks and Wells wanted their podcast to show that it’s not just about the numbers. Real people are impacted by every life lost to gun violence, so the students talked to three of them: first, Darlene Hazel, Hicks’ grandmother. Then one of Harrison’s friends, Jayla Faust, who lost her stepfather to gun violence.

Through the podcast, Harrison explains she wanted to give families a chance to speak.

“It’s important for the people who are affected by it to be able to speak because I feel like a lot of times the government is speaking for them,” Harrison says. “These are the people that actually have to go through this.”

The final interview in the podcast is with RuQuan Brown. Now a football player at Harvard University, but in the podcast, he says he didn’t always know if he would make it to college.

“I would walk down Florida Ave on my way back home and I would cry some nights because I was afraid I wouldn’t make it to college because I’d be killed,” he tells Harrison.

His fear of whether he would survive in D.C. is a very real fear among his peers.

Harrison thinks about 18-year-old Richard Bangura often these days as she starts her first semester at Temple University. Bangura was shot and killed in northeast DC last summer, days before he was supposed to move into the same university.

Losing a loved one to gun violence is painful, but Harrison says the podcast is about what community members take away from that pain, too. “You have a loss, but because of this loss, you have transformed to a better person or have a better view of life.”

Brown, for example, dealt with the grief by creating art.

He owns a clothing brand, Love1, which donates to communities affected by gun violence. Brown is currently looking to fund therapy for students in D.C.’s public schools. He has also donated thousands of dollars to the One Gun Gone project, which repurposes guns into artwork to raise awareness about gun violence.

“I created this brand because I wanted to live,” he says.

Harrison, Hicks and Wells are starting college this fall and hope the lessons they learned from the people in their podcast will help them handle loss, and challenges, in their own lives.

Sneha Dey is an intern for NPR’s Education Desk.