These Older Workers Hadn’t Planned To Retire So Soon. The Pandemic Sped Things Up 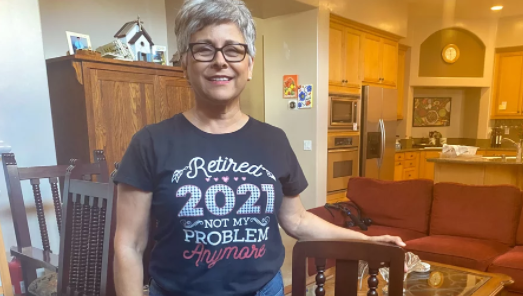 Norma Jasso, 62, sped up retirement plans after her daughter asked for help with a new baby. She stands with a high chair her father had commissioned from a shop in Sinaloa, Mexico. Her daughters used it and now her grandson will too.
Image credit: Andrea Hsu

When Norma Jasso first started working from home in March 2020, she thought it was fun.

“I could wake up later, not have to commute, not have to put my pumps and my working clothes on,” says Jasso, who was a regulatory case manager for San Diego Gas and Electric.

But soon, her days grew longer. She found herself checking email at odd hours. She missed her colleagues. She’d been with the utility for 23 years and found joy being around people.

She hadn’t planned to retire for at least five years, but about a year into the pandemic, her daughter called. She was expecting her first child and wanted her mom’s help. It was a request Jasso couldn’t refuse.

“My mom helped me when I had my daughters, and so I thought, how wonderful. I could pay it back, pay it forward, pay it with love,” she says.

She met with a financial planner to figure out whether she had enough money to retire. To her surprise, her 401(k) retirement account had grown considerably, thanks to market gains in the pandemic.

Millions more retired in the pandemic than expected

Roughly 2 million more people than expected have joined the ranks of the retired in the pandemic, according to The New School’s Schwartz Center for Economic Policy Analysis.

While some, like Jasso, happily chose to retire early, others were forced into retirement after losing their jobs or quitting out of fears of exposure to Covid.

This doesn’t mean that they’re permanently out of the workforce. There’s a constant flow in and out of retirement, says researcher Owen Davis, who conducted the analysis.

But for older workers, the time away can make finding a new job harder, and they often return to lower wages.

“Age discrimination plays a role there,” says Davis. “This is something we certainly saw during the Great Recession.”

Retirement is not an easy choice for many

Yvonne Grace Anderson, 74, was working as a cashier and a customer service representative at a Publix grocery store in Pensacola, Fla., when the coronavirus first arrived in the U.S.

By mid-March 2020, she was experiencing extreme anxiety on the job. With no masks, gloves or disinfectant, Anderson feared catching the virus from one of the thousands of shoppers coming through the store every week. Her daughters shared her fears and implored her to stop working.

Anderson didn’t need the income. She’s widowed but has enough Social Security to live off of. She worked the part-time grocery job in order to fund her favorite hobby, painting, and as a way to be active in the community.

“I’m a social butterfly,” she says. “I love people. I love to hear their stories.”

Just before Christmas, after weathering a difficult hurricane season, she moved to rural Alabama to live with a nephew. With no easy access to transportation, she can’t imagine being able to find a new job.

“I wish I could say that I could embrace retirement, but it scares me — not being a part of something,” she says.

The closest place she can think of where she might find a job is at the nearby Dollar General store, but with the Delta variant surging and no one wearing masks, she’s not interested.

In San Diego, Jasso has taken stock of this moment. She says she has lived two-thirds of her life already. She has just one-third to go.

“What do I want to do with that one-third?” she asks.

And she and her husband are now getting their house ready for sale. They’re moving up the coast to be close to their new grandson, who was born in early August.