These Female Afghan Politicians Are Risking Everything For Their Homeland 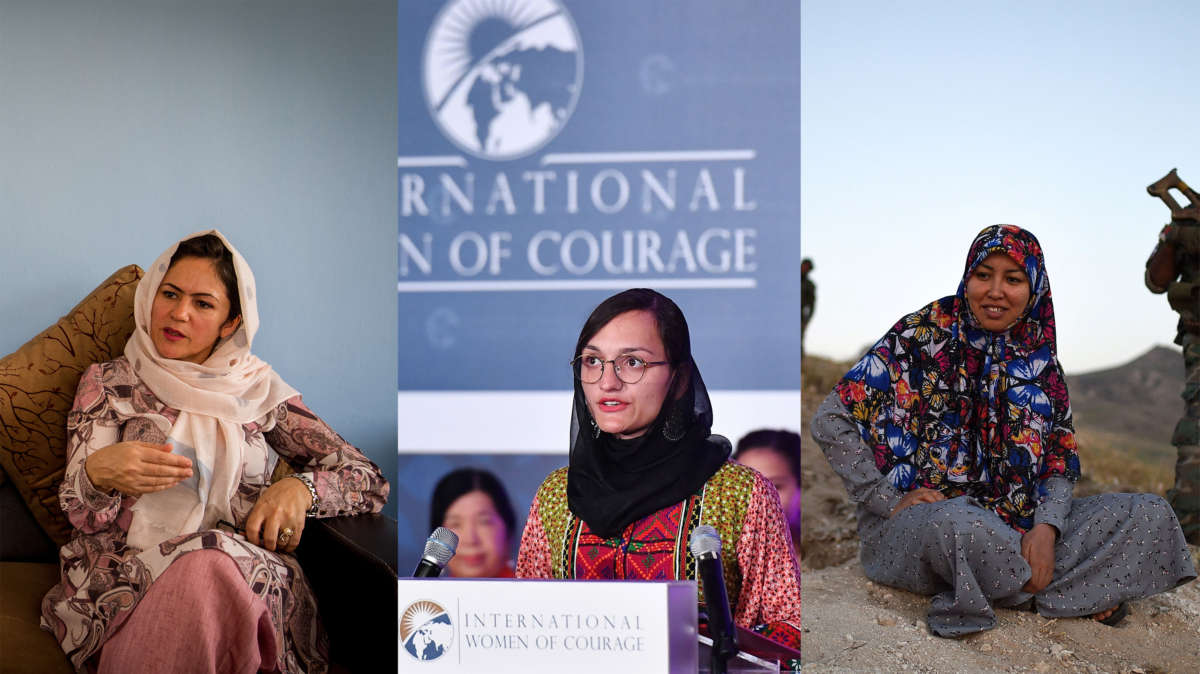 Fawzia Koofi (from left), Zarifa Ghafari and Salima Mazari are among the female politicians working to protect the rights of women in girls in Afghanistan.

The Taliban have taken over Afghanistan, but there are still forces of opposition attempting to maintain human rights in the country. Many Afghan political leaders, including former president Ashraf Ghani, fled the country, but several female politicians stayed to resist the Taliban on the ground.

“My dear homeland, I know you are suffering and in pain,” Zarifa Ghafari, one of Afghanistan’s first woman mayors, tweeted on Aug. 14. “… your real children who are looking to build you are very hard but with full courage trying to pull you out of these bad days.”

Women bureaucrats like Ghafari are risking their lives and freedom to not only save their country and people — but to maintain the the rights of women and girls. When the Taliban previously held power in Afghanistan from 1996 to 2001, women and girls were denied basic rights, including the ability to learn, work or travel.

The Taliban have promised to respect women’s rights and to recruit women to join the new government, but many remain skeptical. There have already been reports of Afghan women being forced to marry fighters and being publicly flogged. In Herat, female members of parliament had their houses searched and their cars taken away.

Among the women speaking out against the Taliban, at great personal danger to themselves, are these three prominent politicians:

Salima Mazari, one of the three female district governors in Afghanistan, has been on a mission since 2019 — recruiting locals to protect the Charkint district from the Taliban. Before the Taliban takeover, half of the district Mazari governs was already under their control.

“Taliban are exactly the ones who trample human rights,” Mazari told AFP on Aug. 6.

Raised as a refugee in Iran, Mazari said she returned to Afghanistan to serve her country. About 600 locals, including farmers, shepherds and laborers, have joined Mazari’s resistance.

“Our people didn’t have guns but they went and sold their cows, sheep, and even their land, to buy weapons,” Mazari said. “They are on the front line every day and night without getting any kind of credit or salary.”

Prior to Taliban control of the country, Mazari had said that they would never tolerate a woman in such a leadership position if they returned to power.

Mazari was right. She has reportedly been captured after the Taliban seized her district.

“There will be no place for women,” said Mazari on Saturday in an interview with the Associated Press. “In the provinces controlled by the Taliban, no women exist there anymore, not even in the cities. They are all imprisoned in their homes.”

On Sunday, Afghanistan’s youngest mayor said she was waiting for the Taliban to come and kill her.

“I’m sitting here waiting for them to come. There is no one to help me or my family. I’m just sitting with them and my husband. And they will come for people like me and kill me,” Ghafari, mayor of Maidan Shar since 2018, told the British newspaper i. “I can’t leave my family. And anyway, where would I go?”

Just three weeks ago, Ghafari had been hopeful about the future of the country.

“Younger people are aware of what’s happening. They have social media. They communicate. I think they will continue fighting for progress and our rights. I think there is a future for this country,” she said at the time.

Ghafari has long championed women’s rights in Afghanistan, hosting her own radio show and founding an organization focused on empowering women economically. She has survived multiple attempts on her life. And late last year, her father was assassinated in Kabul, an attack Ghafari attributed to the Taliban.

“Women of my generation have not forgotten the reign of the Taliban and we are as always worried for the future,” she said when honored with the International Women of Courage award last year.

While returning from a visit to the northern province of Parwan with her sister Maryam a year ago, Fawzia Koofi was shot in the arm by gunmen who tried to assassinate her near Kabul.

Koofi had been one of the few women to represent the Afghan government in peace talks with the Taliban last year. The peace process “depends on Afghanistan’s women,” Koofi wrote months ago in Foreign Policy.

Today, Koofi, the first woman to serve as second deputy speaker of parliament, is calling for a ceasefire. “We are all living in a very chaotic situation in Afghanistan. Because of the war, there is no accountability. People are killed without any accountability — extrajudicial killings, trials without courts,” Koofi said in an interview with Reuters.

She says that she will continue to speak out against human rights abuses though her and other women’s lives are threatened. On Aug. 12, Koofi said that she plans to help as many women and children as she can with necessities like food, clothes, sanitary cloths and soap.

“Women are still doing their best. You have seen from across Afghanistan, every woman is on the media. They are trying to talk about what’s happening to them, their communities,” she said.