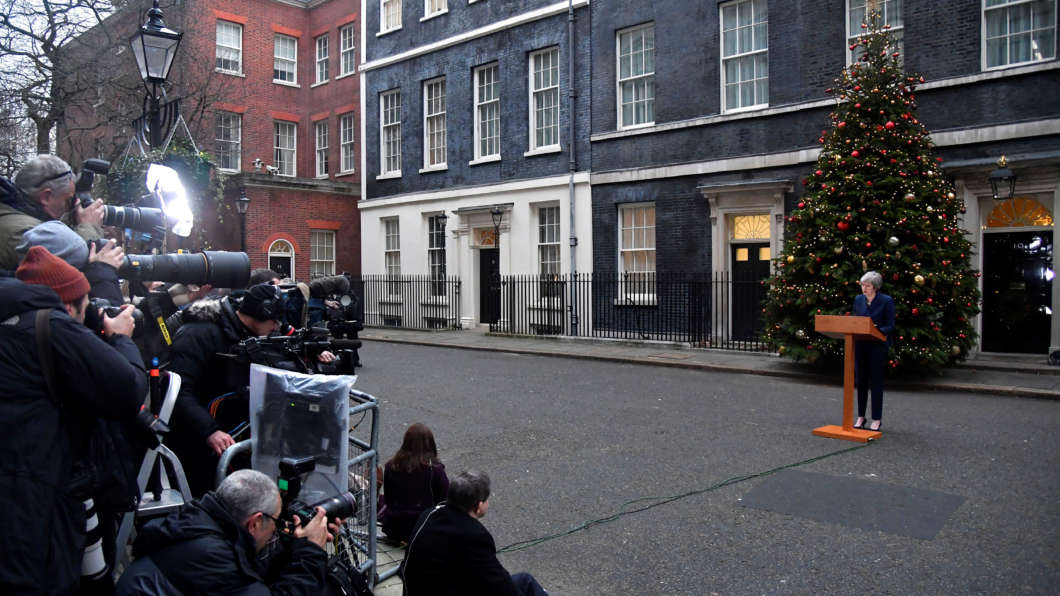 Britain's Prime Minister Theresa May faces a vote on her leadership Wednesday, as debate rages over how the U.K. should exit the European Union. She spoke about the vote to the media outside No. 10 Downing St. in London.
Image credit: Toby Melville

U.K. Prime Minister Theresa May is fighting to keep her job as members of her Conservative Party seek to oust her in a no-confidence vote Wednesday evening. May has been unable to shore up support for the Brexit deal she negotiated with the European Union.

“I will contest that vote with everything I’ve got,” May said outside of 10 Downing Street. The vote on her leadership that will take place from 6 to 8 p.m. local time (1 to 3 p.m. ET).

“If she wins, she can serve for another year without another challenge from her party,” NPR’s Frank Langfitt reports from London. “If she loses, this triggers a leadership contest within the Conservative Party. The winner of that contest would not immediately become prime minister, and there could be heavy pressure to call a general election.”

If May loses her leadership post, it could trigger a “no-deal” exit when the U.K. leaves the EU on March 29, meaning the country would have few formal trading mechanisms in place to interact with the bloc it has belonged to for decades.

With all eyes now on the U.K. Parliament, there is speculation over what the outcome might bring. You can watch the proceedings in the House of Commons online.

“Traditionally, winning a no-confidence vote by a small margin might force a Conservative leader to step down anyway,” Langfitt reports, “but the United Kingdom is facing its biggest political crisis in decades, and past traditions seem to no longer apply.”

To survive as prime minister, May must get the votes of 158 members of Parliament. According to the BBC, 174 lawmakers from her party “have publicly said they will vote for her, with 34 publicly against.”

May replied that a new election would likely extend well into January, meaning that “the new leader — were a new leader to come in — that one of the first things they would have to do would be to either extend Article 50 or rescind Article 50, and that would mean either delaying or stopping Brexit.”

Article 50 is the exit clause in the EU’s constitutional rules; it’s the law May invoked in March 2017, setting up the March Brexit deadline.

The call for a vote on May’s political fate comes two days after she delayed a crucial vote on the Brexit deal she negotiated with the EU, acknowledging that the draft agreement had no chance of being approved in Parliament.

May left Britain on Tuesday to meet with European leaders, hoping to get help in changing the deal enough to win over the doubters back home. But she returned home empty-handed — and she was briefly trapped in her own car as German Chancellor Angela Merkel awaited her. With the U.K.’s leader unable to get out of a German sedan with an apparently sticky door, the moment was called both awkward and symbolic of her struggles in office.

The process of reaching a final Brexit deal has foundered, in large part, on the complicated and essential question of how the U.K. and EU will treat Northern Ireland (part of the U.K.) and the Republic of Ireland (an EU member) short of enforcing a hard border.

To trigger Wednesday’s vote, Conservatives who are unhappy with the way May has managed Brexit submitted 48 no-confidence letters to the chairman of the 1922 Committee, a group that represents the Conservatives’ rank-and-file membership.

Still, George Parker, political editor for the Financial Times, recently told NPR that the prime minister seems to be more popular than her Brexit deal:

“She’s dogged. She’s determined. She’s got a real sense of duty. And it’s interesting that although the Brexit deal she’s negotiated seems to upset just about everyone, she herself has actually gone up in the public estimation over the last few weeks. I think people see her standing there hour after hour in the bear pit at the House of Commons being attacked by people on her own side — mainly men, it has to be said. And I think it — her sort of doggedness actually resonates with people.

“So although she’s often seen as rather an unimaginative politician and just really blundering her way through this Brexit morass, in the end, people quite respect the fact that she’s still there and she’s still standing.”

Both May and her political opponents have had an eye on the clock as the March 29 deadline approaches, with each side seeking to put pressure on the other to make concessions. And in the background, there has been a recognition that the Brexit process will not be a tidy and painless process, no matter who’s in charge.

When asked Tuesday about a possible no-confidence vote, Parker said, “it will solve nothing. It will be an act of huge and damaging self-indulgence, I think.”