There’s A March On Washington For Voting Rights. Here’s What Is Holding Up Action 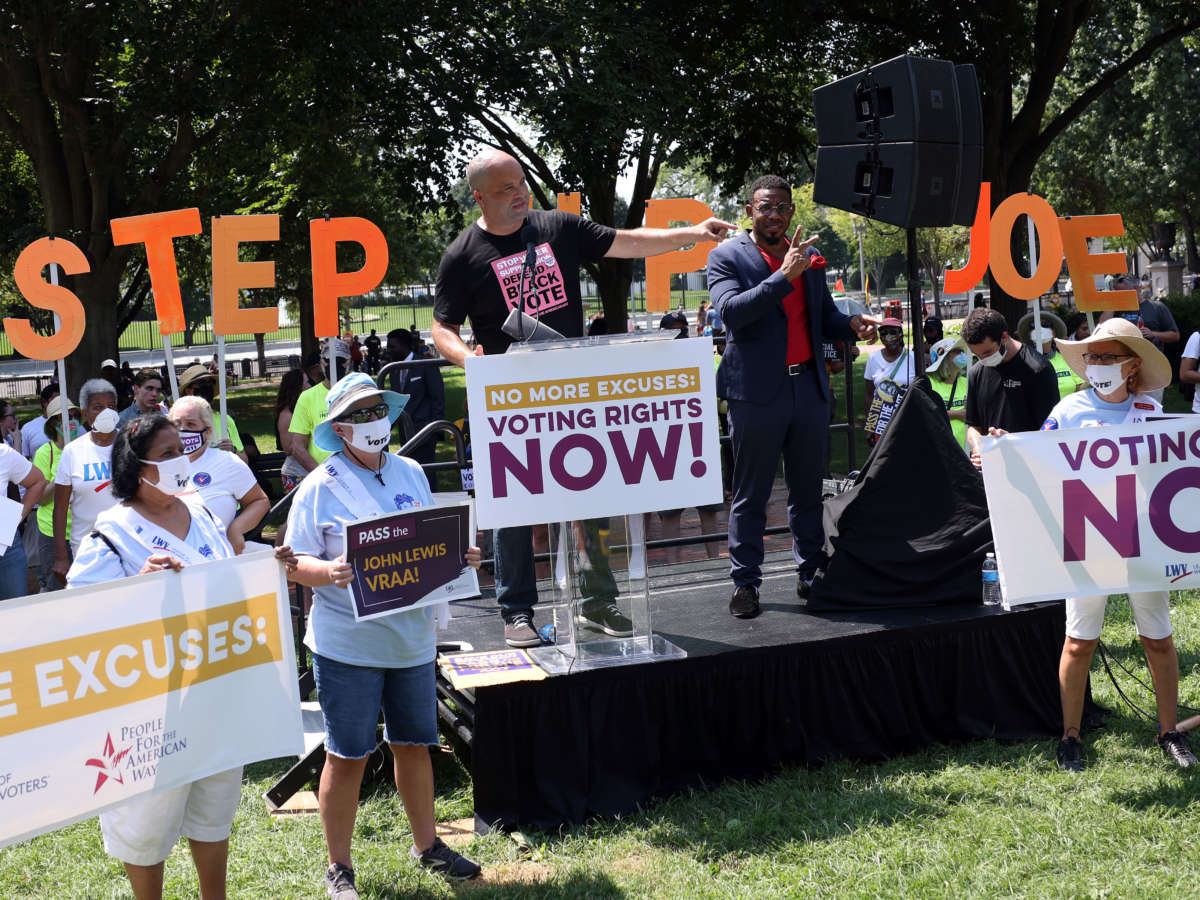 Civil rights leader Ben Jealous speaks at a voting rights rally outside the White House on Aug. 24 in Washington, D.C. Marches across the country are planned for Saturday.
Image credit: Kevin Dietsch

More than 50 years after the Rev. Martin Luther King Jr. stood on the steps of the Lincoln Memorial and reminded America of the “fierce urgency of now,” activists are hoping to recreate the power of that day.

Thousands of activists are expected to converge Saturday in Washington and other cities across the country on the anniversary of the 1963 March on Washington as part of the national fight over access to the ballot box.

“We know that when people engage, we create nonviolent street heat, action occurs,” said Martin Luther King III, the eldest son of the Rev. King. He is one of the organizers of the March On for Washington and Voting Rights.

Democrats and voting rights activists want federal legislation to fight back against new rules in Republican-led states that they say are intended to make it harder to vote, particularly for voters of color and young people. But on Capitol Hill, such bills have faced stiff Republican opposition, leaving Democrats so far unable to pass fresh legislation, despite holding control of Washington.

“It also makes it tragic that we’re at a place where, as my mom used to say, every generation has to re-earn or earn its freedom. Because theoretically, we should be beyond voting rights,” said King. “We should be addressing other issues.”

Many Democrats fear that if federal voting bills aren’t passed soon, the wave of new Republican laws could make it harder for many Americans to vote in the 2022 midterm elections.

“No longer are we allowed or told that we have to count how many bubbles there are in order to register to vote or be able to recite the 67 counties in Alabama in order to vote,” Sewell added. “But I want you to know that the modern day barriers to voting are no less pernicious than those literacy tests and those poll taxes.”

Where voting bills stand in Congress

Underscoring the sense of urgency Democrats feel, House lawmakers returned to Washington this week for a rare August session to vote on the John Lewis Voting Rights Advancement Act. It passed on a party-line vote.

The bill would strengthen the Voting Rights Act, which was weakened by a pair of Supreme Court rulings in the last decade. After the House passed the bill named for Lewis, Biden said the legislation would protect a “sacred right.”

“The House has acted. The Senate also has to join them to send this important bill to my desk,” Biden said. “And the Senate must also move on the [For the] Peoples Act, critical legislation to protect our democracy and the right to vote. We need both of those — those election bills.”

Like Biden, supporters of the bills say that both the Lewis bill and the For The People Act are necessary to protect voting rights. The For The People Act would set new national standards making it easier to vote, end partisan gerrymandering and increase transparency in campaign finance.

Democrats don’t have enough votes in the evenly divided Senate to overcome opposition from Republicans, who have said these voting bills are overreaching and partisan.

Activists are focused on Senate rules

Republicans can block both bills because of the Senate rule known as the filibuster, which activists and some Democrats want to get rid of. Earlier this week, activists held a demonstration near the White House calling on Biden to more forcefully weigh in on the simmering debate over Senate procedure.

Speakers at the rally spoke in front of bright orange capital letters that spelled out the phrase “Step Up Joe.”

Biden needs to “pick a side,” said Cliff Albright, a co-founder of Black Voters Matter.

“At the end of the day, you can’t be on the side of more voting rights and on the side of the filibuster. You can’t walk that line,” Albright told activists.

It is not Biden’s decision whether to change the filibuster. Changing the Senate rules would require all 50 Democrats in the chamber to agree. At least two key moderates, Sens. Joe Manchin of West Virginia and Kyrsten Sinema of Arizona, have said they are opposed.

There have been increasing calls from Democrats and activists for Biden to do more, arguing that his influence could change the dynamics.

“The only way to get Manchin and Sinema to stop being a problem is for the president of the United States to put every bit of pressure on them, and to call on them and their colleagues publicly to remove the filibuster as an obstacle,” said Ben Jealous, the president of People for the American Way.

Senators remain engaged in negotiations on their own versions of voting rights legislation and no text has been released.

Senate Majority Leader Chuck Schumer has indicated that the Senate will move to the issue when lawmakers return to Washington in September.

One key negotiator, Minnesota Sen. Amy Klobuchar, expressed optimism this week, saying at a roundtable in Wisconsin that she felt “good about the direction we’re headed right now,” and that she and fellow Democrats remain in negotiations with Manchin.

Jealous and other activists say its key that Biden and Democrats in Washington act with urgency.

“If in September this crisis has [Biden’s] full focus, it can be fixed by October, well in time for the 2022 election,” said Jealous, who is also a former president of the NAACP. “If the president dallies, if he acts like he’s more powerless than he is, then we could see a situation where entire statewide elections are stolen.”