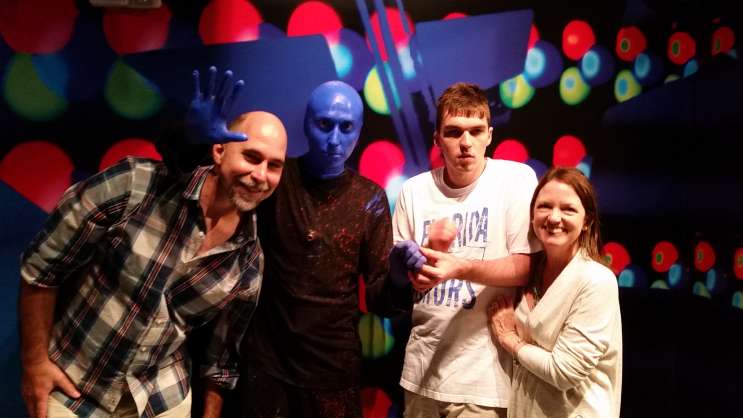 From left to right: Kendall Howington, a Blue Man performer, Drew Howington and Karen Howington get a photo after an austim-friendly Blue Man Group performance. Drew is on the autism spectrum and is non-verbal.

You start off in a dark castle, winding past knights built out of Legos, villagers, even a brightly colored jester. Then you see the dragon himself – of course, built out of Lego bricks. His eyes light up, his mouth opens, and he breaths steam on you as you almost come close enough to touch him.

From there – well, it’s a roller coaster. And on a recent day trip, a boatload of kids screamed with delight as they zigged and zagged over the tracks. Outside the ride, Legoland Spokesman David Brady lists off some of the potential pitfalls of The Dragon for a guest with autism.

“And you saw the dragon squirted something, you didn’t necessarily see that coming,” said Brady, whose son is on the autism spectrum. “I guarantee you that’s something that would alarm my son. Without seeing it, knowing there’s a dragon somewhere in this experience and I’m going to encounter him. And you can’t reason with a 7-year-old that he’s made out of Lego brick.”

Legoland has a solution in the works – they’re called Social Stories. It’s a cheat sheet that shows you everything you’ll experience at an attraction. And that’s just the start: Autism advocacy group Autism Speaks will do training with Legoland workers twice a year on how employees should interact with guests with autism. Legoland is building out quiet rooms with sensory toys in the park to give guests a place to go if your child has a meltdown.

The summer vacation season is rapidly approaching, and for millions of families, summer vacations means a trip to Orlando and the theme parks and attractions. And some of these parks are taking extra steps to accommodate guests on the autism spectrum, a condition the U.S. Centers for Disease Control and Prevention now says affects one in 68 kids.

And some families are turning to courts when they feel theme parks don’t do enough.

The Disney Cases
Theme parks are watching a case coming out of Orlando to see if the status quo for many parks is good enough.

Disney used to allow guests with disabilities immediate access to the fast pass, which meant they only waited for 10 to 15 minutes for any attraction. But Disney changed the program in 2013. Now, disabled guests get an IOU to come back to the ride at a specific time. Families say that doesn’t accommodate guest who are autistic.

“The number of families that have called me is over 550, probably approaching 600,” said Andy Dogali, a Tampa attorney representing families who are suing Disney. “I’ve done full-blown interviews with half of those to make sure this is systematically happening. I’ve signed up 85 families.”

A judge recently dismissed the first federal case without a trial, ruling Disney’s new policy satisfies the Americans with Disabilities Act. Dogali is appealing the case, but he thinks the ruling is a message to the other 40-plus families with cases he has before the same judge. But on the flip side, the Florida equivalent of the Equal Employment Opportunity Commission has ruled 13 times that there is probable cause Disney’s new policy is discriminatory to guests on the autism spectrum.

“It’s really a function of whether the person with autism can handle waiting,” Dogali said. “Most of the moderate to severe cases of autism have difficulty comprehending the concept of time. They only have a present tense. They don’t grasp the concept of time.”

Disney said in a statement that it complies with the Americans with Disabilities Act.

“Disney Parks have an unwavering commitment to providing an inclusive and accessible environment for all our guests, and we fully comply with all ADA requirements,” a spokesperson wrote in an email.

So how does all these different ways of treating guests play out for a family with autism?

Kendall Howington’s 21-year-old son Drew is non-verbal and on the autism spectrum. He loves theme parks; it’s one of the perks of his family living near Orlando. They go most weekends, sometimes both days, and sometimes during the week, if they have time.

Kendall and his son Drew have seen firsthand how Disney’s change in policy has played out. When Drew was young, they were able to get on the rides quickly – which, he said, was great for them and for the other families in line. But now:

“In the summer, when the peak crowds are there, it really almost doesn’t work,” Howington said. “Because Drew and a lot of kids like him, it’s too much for him to sit and wait.”

And to be clear – Kendall Howington is not one of the families suing Disney. He thinks Disney overall does the best job handling guests with special needs, and said he understands why they had to make changes to the program, even when it’s not ideal.

“People don’t understand why these kids need any kind of pass,” Howington said. “You gotta understand, when you have a kid like this, it’s extremely stressful. And just the simple fact you can take them somewhere and they can do something in a safe environment is really valuable. For some of these families, it’s all they have.”

The performers never speak, and they view the world with a child-like sense of wonder.

Now each Blue Man Group show once a year hosts a special, toned down show for autistic guests. That means they dim down the lighting cues, cut out some of the sudden loud noises, and interact with the crowd less. The lobby is also a safe space for people who may need a break. Every Blue Man Group show has committed to doing at least one show per year like this.

After last year’s performance, Day remembers a boy who walked up to him, smiled and gave a thumbs up. Day put his hand on his shoulder and posed for a photo. That autistic boy’s mom later wrote that she normally has to protect her son from park characters and clown characters – they usually scare him.

“It’s one of the more satisfying parts of being a Blue Man,” Day said.