Their Only Option: Free Clinics Hear Confusion Ahead Of Obamacare Enrollment 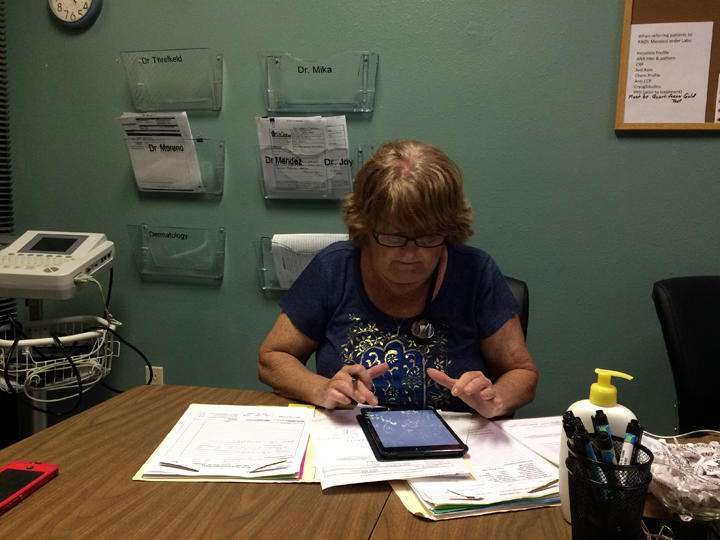 When patients come to The Outreach Clinic in Brandon, one of the first people they encounter is Jackie Perez.

As a caseworker for the free clinic, she verifies their income to make sure they are eligible to get care. She checks that they have health insurance and finds out what brought them in. These days, she’s hearing a lot of confusion about the Affordable Care Act.

“Everyone is like ‘I don’t know what’s going to happen if we get the Affordable Care Act, then what’s going to change?’” Perez said. “So people are confused. They are discouraged.”

Open enrollment in the Obamacare marketplace begins in less than two weeks but this year some consumers think the law is already dead.

From threats to repeal the Affordable Care Act, to news about rising premiums and President Donald Trump’s recent decision to do away with some subsidies, people who don’t closely follow the issue are getting lost in the headlines and sound bites.

“Obamacare is finished, it’s dead, it’s gone,” Trump recently said at a cabinet meeting days after killing the subsidies. “You shouldn’t even mention it, it’s gone. There is no such thing as Obamacare anymore.”

Trump’s administration also slashed the advertising budget for marketplace plans by 90 percent and cut the enrollment time in half.

That’s going to have a real impact, said Jodi Ray, director of the state’s largest Obamacare enrollment program. This year, the organization will have fewer counselors helping people sign up after its budget was cut by nearly $1 million.

Ray says her organization was already getting calls from people who didn’t realize the Affordable Care Act was still around.

“There are still a lot of people who are confused by some of the misinformation that has permeated our communities,” Ray said.

At the same time, family budgets are being hit harder. That’s because the six insurers who filed plans for 2018 on Florida’s marketplace increased premiums by an average of 45 percent.

Consumers who are eligible for federal subsidies that cover premiums should only see modest increases. But for those living on tight budgets, even a slight bump can price them out of the market.

Some who can no longer afford health insurance are showing up at a free clinic called The Haley Center in Winter Haven. Donna Armes, a nurse practitioner and the clinic’s director says people who stopped using the clinic because they enrolled in Obamacare are returning.

“We have them slowly filtering back in saying I can’t afford my rent, my lights my insurance and eat,” Armes said. “So what goes first? What is the one thing you can get rid of — your health insurance.”

And as more people leave the market, the risk pools shrink, which drives up costs for those who remain.

That means consumers have fewer choices for care and more out of pocket expenses.

“So it has more of a ripple effect than just cost,” Hall said. “It also has the ripple effect of providing true access for consumers who purchase the product.”

At the Brandon clinic, caseworker Jackie Perez says cost is the number one reason why people don’t sign up for the Affordable Care Act or drop it after giving it a try.

She thinks as prices for health insurance continue to rise, many will see the free clinics as their only option for care.

“We’re going to get more patients because the insurance from employers continues to go up and these people are not finding any other means,” Perez said.

This story and the “Their Only Option” series is produced as a project for the University of Southern California Center For Health Journalism’s National Fellowship.