The WHO Knows Insulin Is Too Expensive. How It Plans To Drive Down The Price 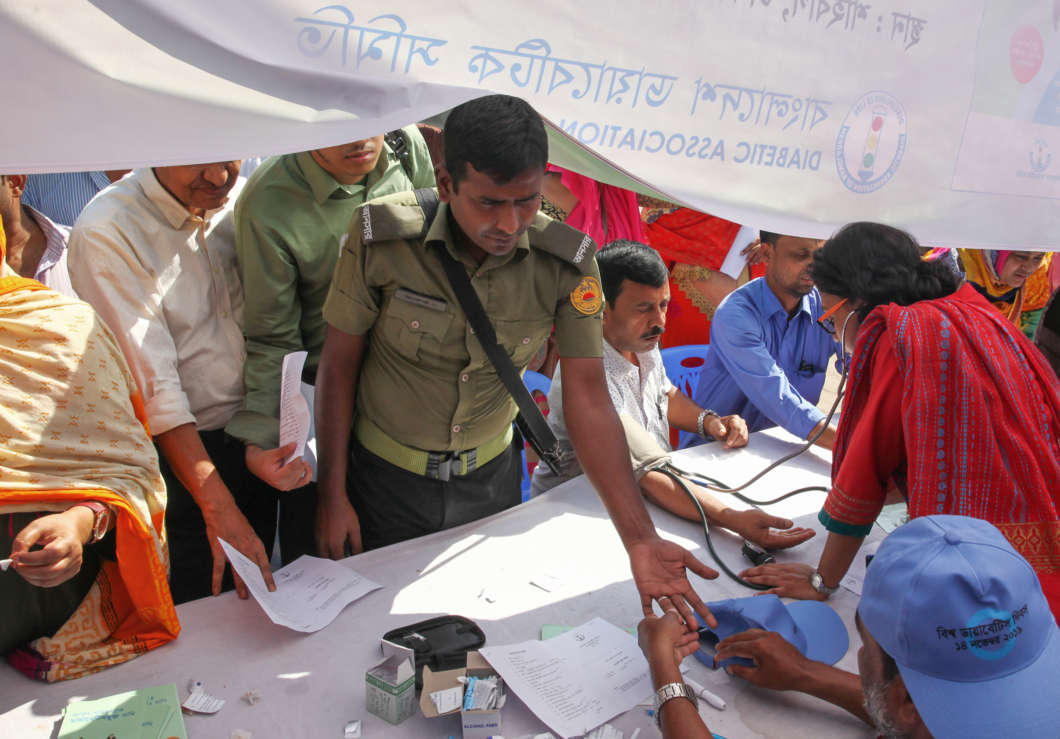 A man gets tested for diabetes at an event in Dhaka, Bangladesh, for World Diabetes Day in 2019.
Image credit: Mehedi Hasan

Johnpeter Mwolo was 15 when he was diagnosed with Type 1 diabetes.

His body, unable to produce the hormone critical for regulating blood sugar, would now rely on manufactured insulin. He learned to give himself the treatment — four injections a day.

But as he was growing up in Tanzania, insulin was expensive and not always available. Mwolo resorted to rationing his insulin, sharing a vial with his cousin, who also had Type 1 diabetes. “It was one vial to two people,” he says. “Many of the necessities that we are supposed to have are not there.”

It’s a global problem that the World Health Organization is now working to address. In November, the WHO launched a pilot program to boost the availability of insulin worldwide. The idea is to work with insulin manufacturers to increase the global supply — and in the process, potentially drive down the price of the treatment. Since then, seven pharmaceutical companies have shown interest in participating in the program.

“The simple fact is, that the prevalence of diabetes is growing, the amount of insulin available to treat diabetes is too low, the prices are too high, so we need to do something,” said Emer Cooke, the head of regulation of medicines and health technologies for the WHO, in a statement.

Insulin is one of the world’s essential medicines. For Type 1 diabetes patients, insulin is a rare example of a medication that’s absolutely necessary to live. Without insulin, sugar in the blood accumulates, which can lead to acute life-threatening complications, such as nerve damage or eye damage and, in the worst case, death.

However, 50% of the estimated 100 million people who are in need of insulin globally do not have reliable access, meaning either they can’t afford insulin or it’s not available. This is according to a 2017 study led by Health Action International, an independent research group.

The price of insulin is especially prohibitive in the developing world, where diabetes is growing rapidly — and governments are struggling to afford the medication to supply hospitals and pharmacies. A 2010 study in Lancet found that 10% of Mozambique’s expenditure on medications was for insulin.

These costs are often passed on to consumers, who also struggle to pay for the treatment. A WHO survey of 24 mostly low- and middle-income countries found that a month’s supply of insulin costs more than a fifth of take-home pay for a worker in Accra, Ghana.

Mwolo, now 29 and working as a diabetes advocate for the nonprofit T1International in Tanzania, still has trouble paying for his diabetes treatment. He sends money to his family in Kenya to purchase a popular brand of insulin for him called Lantus, manufactured by the pharmaceutical company Sanofi. This offers a small savings of 20,000 Tanzanian shillings, about $9.

Globally, the list price for insulin varies by country — and limited market competition keeps the prices high, according to Médecins Sans Frontières, which has been campaigning to improve access to the treatment.

“You have the three big pharmaceutical companies that dominate the global insulin market, which is unprecedented when you look at how medicine markets work around the world,” says Christa Cepuch, a regional pharmacist for MSF.

The WHO’s pilot program is designed to put non-brand versions of insulin on the market — geared toward the developing world. It centers on a process called “prequalification,” which the WHO developed in 2001. It’s a system that allows drug manufacturers to get a stamp of approval from the WHO.

Many countries rely on regulatory bodies to help them decide which drugs to buy. The U.S., for example, has the Food and Drug Administration. But many countries, especially those in the developing world, don’t have strong equivalents.

Prequalification takes out the guesswork of what’s safe for governments, U.N. agencies and medical charities to buy. “[It] is a certification of good manufacturing practices. It’s about making purchasers aware of multiple products that are available in the market,” says Amanda Glassman, executive vice president of the Center for Global Development, whose research focuses on global health policy and costs.

The drugs, once prequalified, are publicly listed online. Buyers can then procure those drugs directly from the manufacturer.

While it’s not known what the prices will be, the WHO expects they will be lower than the prices for brand-name insulins. Many of the companies that have expressed interest are smaller and, to compete, will likely set low prices to reach more buyers.

Part of the WHO’s confidence in this program comes from previous experience. It has prequalified other drugs before, particularly those used to treat tuberculosis, malaria and HIV. In the case of HIV medication, it lowered prices significantly.

Glassman does not consider prequalification a silver bullet. In a free market, after all, buyers always have a choice. “[A purchaser] could also just say, ‘I’m going to buy from any manufacturer that the U.S. FDA registers. Or the best regulatory agency in India. You don’t necessarily have to go with [insulins that are] WHO prequalified.”

Those insulins, however, have been breaking the budgets of low- and middle-income countries facing shortages.

“In those countries, having an alternative WHO-certified supply for these products really matters to ensuring access and affordability,” says Rena Conti, associate professor at Boston University’s Questrom School of Business and a researcher in drug pricing.

Cooke did not disclose the names of the seven companies that have approached the WHO about this program — a critical first step to participating. And it’s unclear which will actually go through the prequalification program. But she described those that have flagged their interest as “small- to middle-sized companies.”

One of the companies, however, is among the “big three” (Eli Lilly and Company, Sanofi and Novo Nordisk), but the WHO would not confirm which.

The WHO hopes more companies hop on board. “If we got five additional companies, we would be very pleased,” Cooke says.

The WHO is holding a big meeting of insulin stakeholders in March. “It will be a meeting looking at the overall insulin market, to get an idea about what else we should be doing,” Cooke says.

The goal, Cooke says, is to have prequalified insulin from the WHO on the market in two years.

Meanwhile, groups like MSF can’t wait to get their hands on this lower-cost insulin.

Cepuch has been advocating for the WHO to prequalify insulin for some time. The majority of diabetes patients served by MSF are in Jordan, Lebanon and Iraq, including refugees fleeing Syria.

“These are really vulnerable populations on the move,” Cepuch says. “We have seen so many people who have had to make the difficult decision to ration their insulin.”