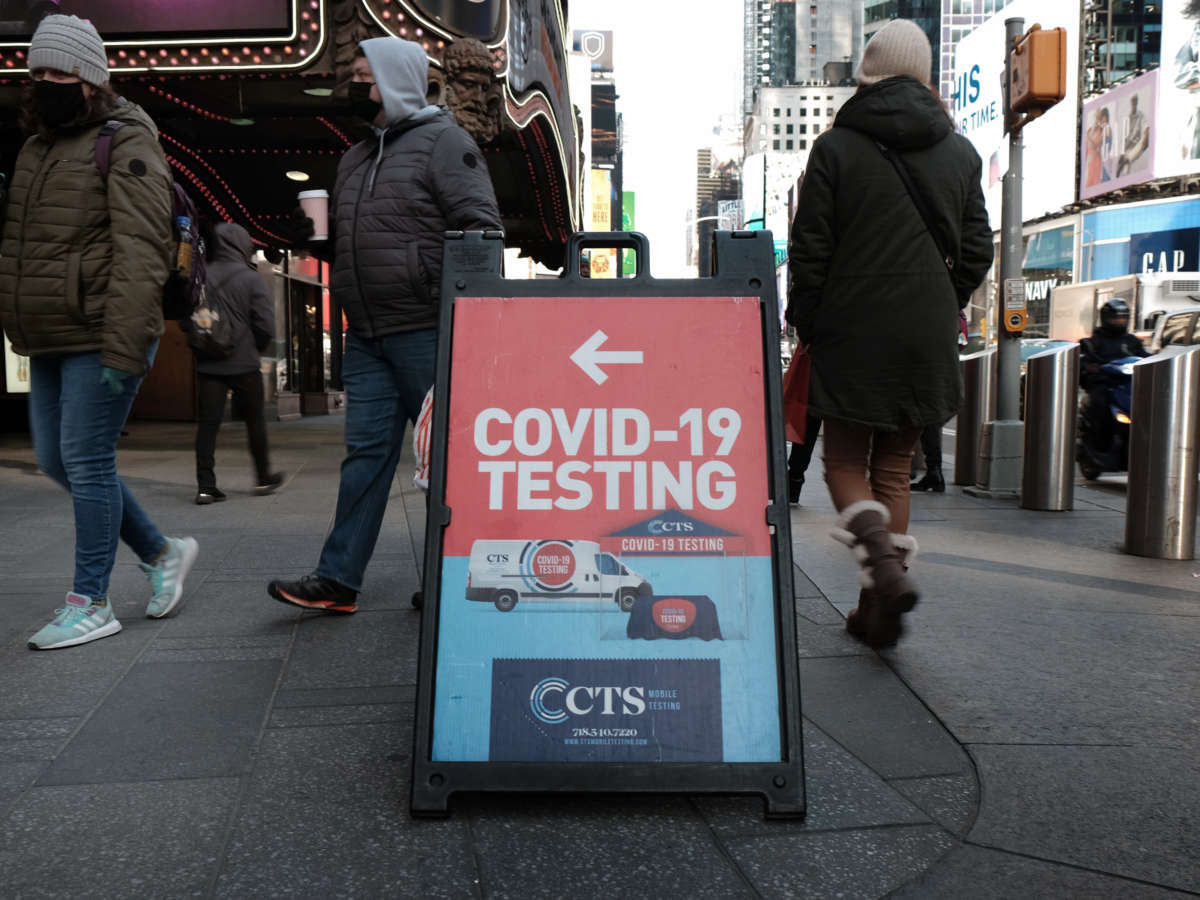 People pass a COVID-19 testing site on a Manhattan street on Jan. 21. The White House says it is running out of money to pay for coronavirus tests for people who don't have insurance.
Image credit: Spencer Platt

Next week, the White House says it will start to wind down a COVID-19 program that pays to test, treat and vaccinate people who don’t have health insurance.

It’s one of several immediate impacts after Congress declined to add $22.5 billion in funding to a broad government spending bill passed last week. President Biden signed the bill into law on Tuesday, hailing it as a bipartisan achievement without mentioning the lack of COVID-19 funding.

The COVID-19 funding request met with political pushback from Republicans and concern among some lawmakers that the White House has not fully explained how trillions in COVID money has been spent so far and what funding remains. Republicans in particular have been unwilling to agree to new spending.

The White House warned in a letter to lawmakers on Tuesday that the country risks being “blindsided” by future coronavirus variants.

“What we’re asking for is a modest investment to not squander the gains we’ve made over the last year,” said Natalie Quillian, deputy coordinator for the White House COVID-19 response team.

“We need to remember the dark days and how quickly a variant can come,” Quillian told NPR.

Why Congress left out the funding

Leaders from both parties had initially agreed to include roughly $15 billion in COVID-related funding as part of the more than $1.5 trillion government spending package that Congress passed last week.

Republican leaders agreed to support the emergency spending because Democrats chose to cover some of the cost by reallocating money Congress had already approved but has not yet been spent.

A number of House Democrats objected to that plan because as many as 30 states would lose access to money that was promised but had not yet been spent, and House Speaker Nancy Pelosi was forced to removed that funding from the broader package.

Democrats say they will try to pass a standalone COVID-19 funding bill in the coming days, but Republicans broadly oppose the plan, meaning there is little chance the measure can overcome a GOP filibuster in the Senate.

The White House will cancel a new order for monoclonal antibodies

The White House said it will have to cut back shipments of monoclonal antibody treatments to states by 30% next week because of the funding snafu, and said the nation’s supply of those treatments could run out as soon as May.

The Biden administration is canceling plans to buy more of the treatment next week because of the lack of funding. The government also cannot buy more oral antiviral treatments like Paxlovid beyond the 20 million treatments already secured, and needs to scale back planned purchases of preventive treatments for immunocompromised people, the White House said.

And while officials say they do have enough vaccine doses available for immunocompromised people to get a fourth dose, if the rest of the population ends up needing an additional dose, they may not have the funds needed to meet the nation’s needs. The gap in funding would be particularly severe if a vaccine-evading variant comes along and a new formulation is needed.

The White House also said it will not be able to provide help to domestic manufacturers of at-home coronavirus tests beyond June, which it said will lead to diminished testing capacity.

Research into next-generation COVID-19 vaccines will be curbed, and some surveillance for new variants will also be stopped, the White House said. The administration also will need to limit its push to help poorer countries vaccinate people.

Republicans want the White House to provide a more detailed accounting of exactly how the government has spent the roughly $6 trillion in COVID-19 funding that Congress has already approved. Lawmakers and staff say they have not been given any clear accounting of the funds.

Earlier this month Sen. Mitt Romney, R-Utah, sent Biden a letter with specific questions including how much money has been spent on each testing and vaccine program, specific figures on how much of the previously allocated money is unspent, unobligated or undisbursed, and how much has been obligated but not sent out for more than six months.

So far, Romney and at least half a dozen other top Senate Republicans said they have not received full responses to their questions.

“I fully agree we need additional funding for therapeutics, for being ready for what’s coming down the road with regards to testing and so forth, but the Democrats passed, by themselves, $1.9 trillion in March,” Romney said. “And not all of that money has been spent.”

Others, like Sen. John Thune, R-S.D., said Congress has a responsibility to conduct oversight on the money that has already been spent.

“Tracing back and making sure that COVID dollars were spent in a responsible way — in a way that was truly directed toward dealing with the effects of the pandemic — is absolutely something we need to do as part of our oversight responsibility,” Thune said.

Romney and several other Republicans said there was an agreement to pass the funds during the spending negotiations and Democrats walked away, not Republicans.