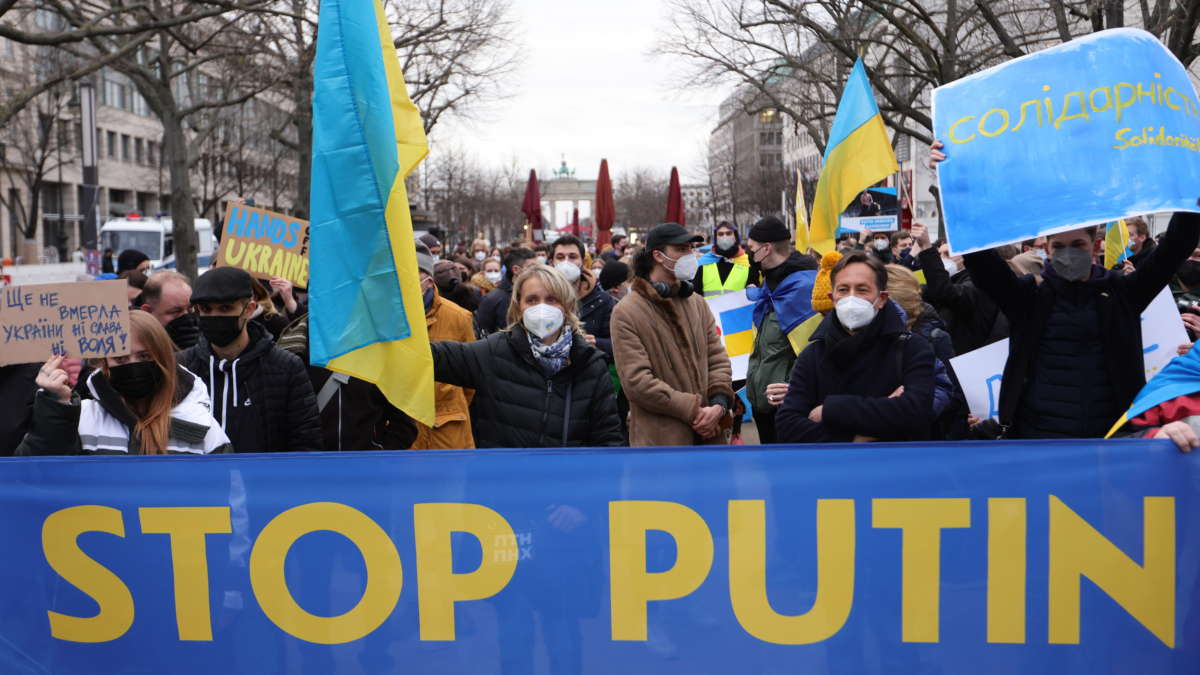 A woman holds a Ukrainian flag next to a banner reading stop Putin as youth groups protest Ukraine intervention with human chain in front of the Russian Embassy on Tuesday in Berlin. Yesterday, Russia recognized two breakaway regions of eastern Ukraine as independent republics and said it would send troops in "peacekeeping functions," prompting widespread condemnation from Western governments.
Image credit: Omer Messinger

Russia’s decision to order troops into parts of eastern Ukraine is “the beginning of a Russian invasion,” President Biden said Tuesday as he announced a new set of sweeping sanctions targeting Russia’s ability to do business with the West.

The U.S. sanctions join those announced earlier by the U.K. and the European Union as a joint response to Russian President Vladimir Putin’s decree Monday that recognizes two regions in Ukraine as independent.

Speaking from the East Room of the White House, Biden called Putin’s decree a “flagrant violation of international law.”

“We still believe that Russia is poised to go much further in launching a massive military attack against Ukraine,” Biden said. He cited the positions of Russian forces and the recent movement of blood and critical military supplies nearer to the border with Ukraine as indications that an invasion could happen “in the days ahead.”

Western governments have raised concerns about Russia expanding the force and scope of its operations under the guise of a humanitarian mission. The Kremlin has routinely — and falsely — compared the plight of Russian speakers in these areas to genocide.

“Russia’s aggression against Ukraine is illegal and unacceptable,” European Commission President Ursula von der Leyen said via Twitter. She added that the EU is “united in its support for Ukraine’s sovereignty and territorial integrity.”

Even as Secretary of State Antony Blinken canceled an upcoming meeting with Russian foreign minister Sergei Lavrov, Biden said the U.S. remains open to diplomacy. “There is still time to avert the worst-case scenario that will bring untold suffering to millions of people,” he said.

Here’s a rundown of where things stand:

The U.S. is calling this an invasion and enacting sanctions

For months, the U.S. and its allies have promised to enact severe sanctions on Russia should it choose to invade Ukraine. On Tuesday, Biden said the moment has come. “Russia has now undeniably moved against Ukraine,” he said.

The sanctions announced Tuesday will hit two major Russian financial institutions along with the Russian government’s ability to access Western financing. Additional sanctions in the coming days will target Russian elites and their families, Biden said.

Biden described the sanctions as a “first tranche,” and he warned that the U.S. had prepared further consequences if Putin does not withdraw the troops.

“As Russia contemplates its next move, we have our next move prepared as well. Russia will pay an even steeper price if it continues its aggression,” Biden said.

Further measures could include sanctions on other Russian banks, as well as export controls on strategic products like semiconductors, said Daleep Singh, a White House deputy national security adviser.

The two state-owned banks targeted by Tuesday’s sanctions — Vnesheconombank (VEB) and Promsvyazbank (PSB) — will be entirely cut off from the U.S. financial system.

The banks were chosen because of their ties to Russian government activities. VEB services Russia’s sovereign debt and finances major infrastructure and industrial projects in the country, while PSB finances the country’s Ministry of Defense and nearly 70% of Russia’s defense contracts, according to the U.S. Treasury Department.

“Today’s actions, taken in coordination with our partners and allies, begin the process of dismantling the Kremlin’s financial network and its ability to fund destabilizing activity in Ukraine and around the world,” Treasury Secretary Janet Yellen said in a statement.

Notes: Data as of Feb. 22. The area of separatist control is approximate.
Credit: Nick Underwood/NPR

Hundreds of U.S. troops will move to the Baltics

“These are totally defensive moves on our part. We have no intention of fighting Russia,” Biden said Tuesday.

About 800 troops will be moved from Italy to the Baltic region, according to a senior Pentagon official who spoke on condition of anonymity. The U.S. will also move as many as eight F-35 fighter jets and 32 Apache helicopters to NATO’s eastern front in the Baltics and Poland.

About 70,000 U.S. troops are permanently stationed in Europe. Another 7,000 have rotated through shorter deployments in Eastern Europe since 2014 as part of the U.S. response to Russia’s annexation of Crimea. In recent weeks, Biden has ordered the deployment of several thousand more from the U.S. to Europe, mostly to Poland, which shares a border with Ukraine.

Biden and other officials have repeatedly said that U.S. forces will not be used to fight in Ukraine.

Russia’s Federation Council formally granted Putin the power to deploy forces outside the country’s borders — a move the country’s upper chamber linked to the deployment of what the Kremlin described as “peacekeepers” to Donetsk and Luhansk.

Already the borders claimed by the separatists extend far beyond the areas actually under their control. The treaties could allow separatist leaders to request Russian military intervention into territory currently controlled by Ukrainian forces.

“Any assets they hold in the U.K. will be frozen, the individuals concerned will be banned from traveling here, and we will prohibit all U.K. individuals and entities from having any dealings with them,” the prime minister added. More sanctions are ready to be deployed, he said.

Johnson deemed the rationale Putin presented for acting against Ukraine in a long speech on Monday “absurd and even mystical reasons” for an international crisis.

“We will not allow Putin to drag our continent back into a Hobbesian state of nature, where aggression pays and might is right,” Johnson said. “And it is precisely because the stakes are so high that Putin’s venture in Ukraine must fail.”

One of the main bargaining chips in the dispute over Ukraine and NATO is the Nord Stream 2 gas pipeline, which is slated to bring Russian natural gas into Germany. The new service is set to start operations later this year — but after Putin’s action, German Chancellor Olaf Scholz ordered his government to halt certification of the pipeline.

“These are difficult hours for Europe,” Scholz said, according to a translation posted by Bloomberg News. “Almost 80 years after the end of the Second World War, we might see a new war in Eastern Europe. It is our task to avert such a disaster, and I call on Russia to contribute their fair share.”

Germany is now looking at other ways to satisfy its energy demands, Scholz said.

If it becomes operational, Nord Stream 2 would transport natural gas from Russia directly to Germany under the Baltic Sea. The $11 billion pipeline would have an annual capacity of 55 billion cubic meters of natural gas. The Russian state-owned energy giant Gazprom is the project’s sole shareholder.