‘The Vaccine Is On Its Way, Folks,’ Fauci Says As Brooklyn Names Him A COVID-19 Hero 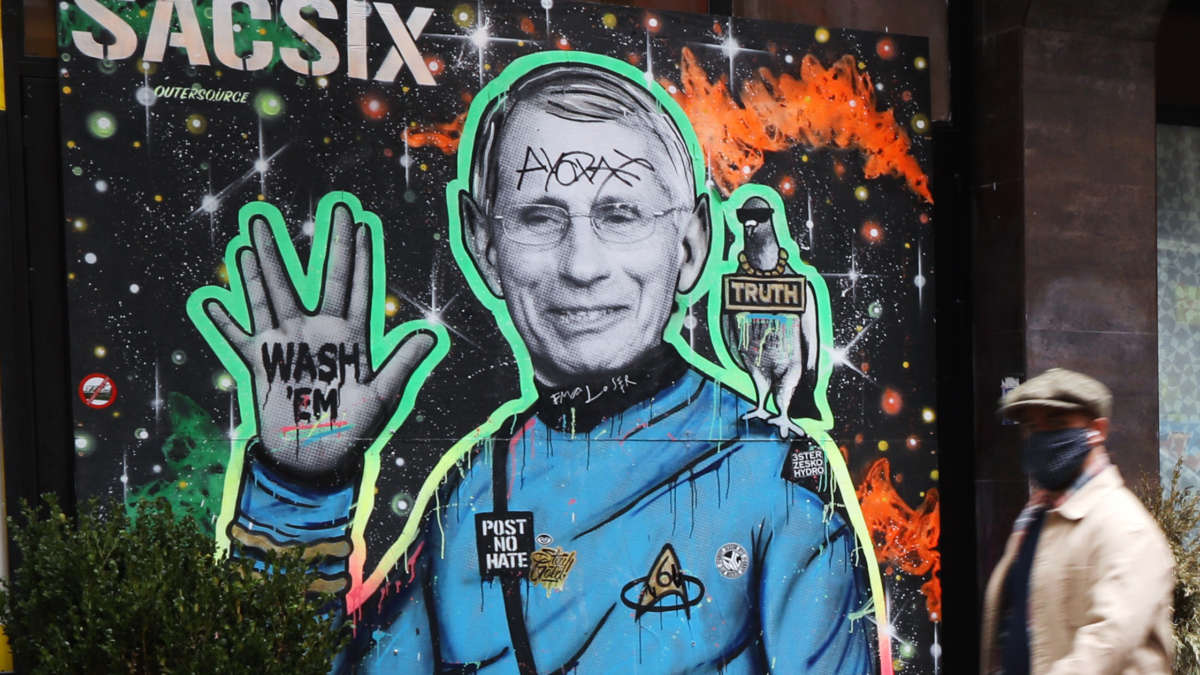 Dr. Anthony Fauci, here depicted in a mural in New York City, is "a proud son of Brooklyn" who is helping the country get through the COVID-19 pandemic, Brooklyn Borough President Eric Adams said.
Image credit: Spencer Platt

Dr. Anthony Fauci was recognized as a hero on Tuesday by the New York City borough of Brooklyn, where he was born and raised. As he accepted the honor, Fauci, the nation’s leading infectious disease expert, shared his optimism that a COVID-19 vaccine is close.

“The vaccine is on its way, folks, so hang in there, hang tough. We’re going to get over this together,” Fauci said via video link, speaking to a crowd gathered outside Brooklyn Borough Hall.

“Amen!” a woman in the crowd replied.

Fauci was recognized as “a reassuring champion of science and reason who has navigated our nation through turbulent times,” Brooklyn Borough President Eric Adams said in a statement.

Brooklyn, which says its population of 2.6 million would make it the fourth-largest city in the U.S., honored Fauci and others during a ceremony just before noon. Fauci attended the event virtually.

“This is really a great thrill for me,” Fauci said, adding he was proud to be recognized along with other honorees, who were standing behind a large video monitor.

In his brief remarks, Fauci recalled his youth in the Bensonhurst neighborhood, saying he carries Brooklyn in his DNA.

“Whenever people ask me how I put up with all the stuff that goes on in Washington, I have two words for them. It’s called ‘Brooklyn strong,’ ” he said, drawing a loud cheer from the crowd.

Fauci congratulated New Yorkers for getting a deadly coronavirus outbreak under control — and he ended his speech on an optimistic note, predicting that an answer to the devastating coronavirus that causes COVID-19 is close at hand.

His remarks about a potential vaccine comes a day after Pfizer announced promising news about its experimental COVID-19 vaccine, which was found to be more than 90% effective, according to clinical results. Also Monday, a leader in the federal COVID-19 vaccine initiative told NPR that the first of millions of Americans could start receiving a vaccine as soon as next month.

Fauci was honored a week after President Trump suggested he might fire the disease expert after the election. President-elect Joe Biden has said he would “immediately reach out to Dr. Fauci and ask him to continue his incredible service to our country.”

In his statement, Adams said Fauci exemplifies the best of public service as the director of the National Institute of Allergy and Infectious Diseases — a job he has held since 1984.

“It is a privilege to recognize a widely admired public health official and a proud son of Brooklyn, Dr. Anthony Fauci, as one of our COVID heroes,” Adams said.

The “Brooklyn COVID Heroes” award series has recognized dozens of people who have worked to help others during the pandemic, including 12-year-old Leah Pavlov, who chose to put her own money – saved from her allowance and birthday gifts – toward providing hundreds of lunches to essential front-line workers in the emergency room of a Coney Island hospital.