The U.S. ‘Battles’ Coronavirus, But Is It Fair To Compare Pandemic To A War? 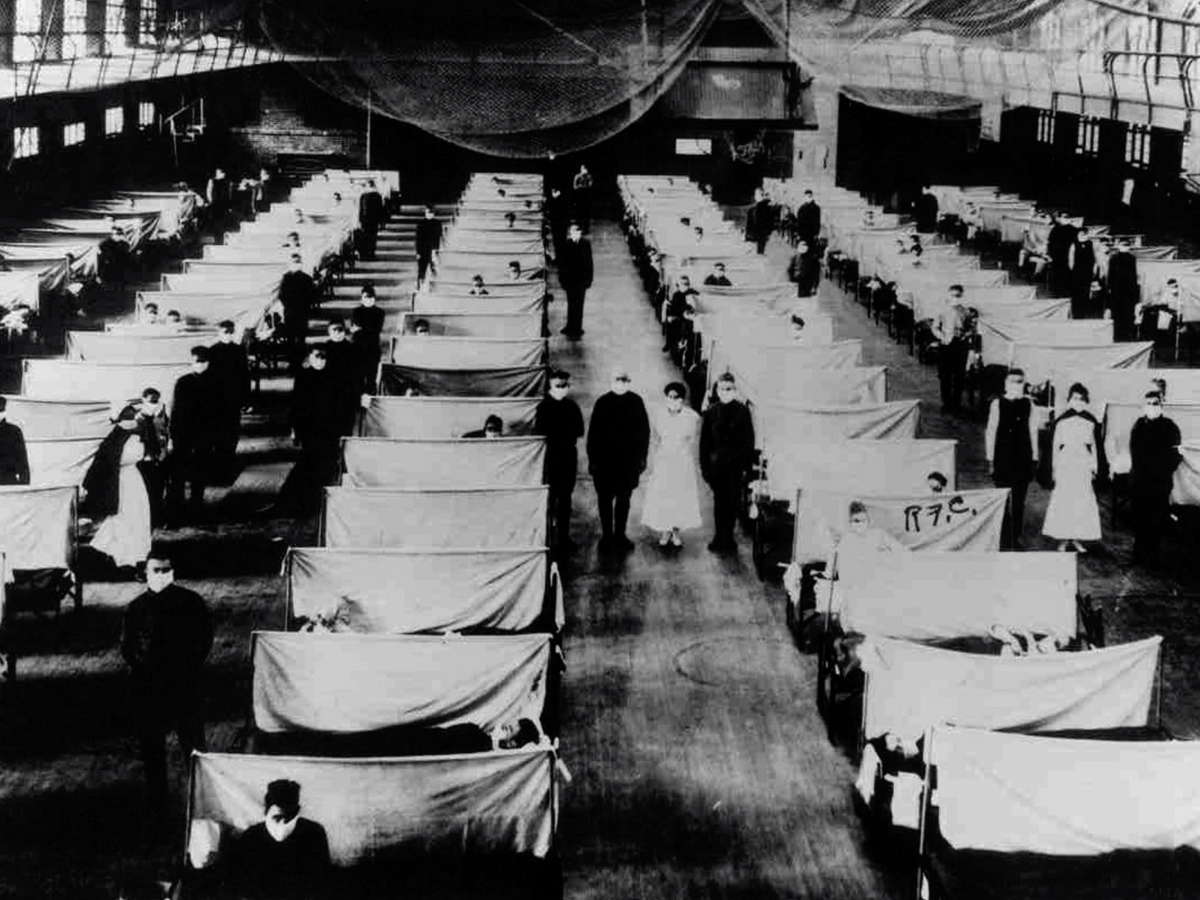 Counting the dead is one of the first, somber steps in reckoning with an event of enormous tragic scope, be that war, natural disaster, or a pandemic.

This dark but necessary arithmetic has become all too routine during the COVID-19 outbreak.

January was the deadliest month so far in the U.S.; the virus killed more than 95,458 Americans.

Each death is unique, a devastating loss that ripples through a family, a network, a community. But in the aggregate, the national death toll can feel abstract, and its constant repetition in the news can become numbing. Journalists, commentators and public officials are left searching for new ways to convey the deadliness of this pathogen, and the significance of its mounting fatality rate.

Many have turned to history, citing Pearl Harbor (2,403 killed) or the 9/11 attacks (2,977 killed), as a way of providing perspective when the number of daily COVID deaths in the U.S. reached those levels. (Currently, more than 3,000 Americans are dying from COVID every day.)

January 21, 2021 offered another opportunity for historical comparison: that was the day when the COVID death toll in the U.S. reached — and then exceeded — the 405,399 Americans who died in World War II.

For many, attempting to compare the two death tolls — or even take note of their brief conjunction — is misguided or even offensive. It is certainly a morally fraught exercise. The true emotional and social impact of either event can never be quantified, but many media outlets still mentioned it.

Which raises the question: are we as a society too quick to reach for these historic comparisons? Should a politically-driven world war and a biologically-driven pandemic, more than seven decades apart, be put side by side at all?

“This is comparing apples to oranges,” wrote NPR listener Kris Petron last month in response to a story that made use of that comparison. “It is extremely disrespectful to our nation’s veterans, who write a blank check with their lives, to defend our Constitution.”

Petron is not alone.

This type of response, over time, has convinced medical historian Dr. Howard Markel to make it a practice of never drawing parallels between the death toll from war and a pandemic.

“I try not to make comparisons to an event or group that I know contains within it a great deal of sentiment, feeling and pain,” says Markel, a professor at the University of Michigan and author of When Germs Travel: Six Major Epidemics That Have Invaded America and the Fears They Have Unleashed.

The notion that combat deaths carry a unique meaning or value is deeply rooted in human culture. Societies tend to valorize those who died for a cause on a battlefield.

But in this pandemic it’s the frail elderly — many of them living in nursing homes and assisted living facilities — who have died in vast numbers.

“To the watching world, that’s not the same as the death of a young soldier in their 20s, let’s say, on the front lines in a war,” says Yale historian Frank Snowden, author of Epidemics and Society: From the Black Death to the Present.

“But, I don’t think we have a right to weigh up lives and say which is more important,” Snowden added.

Unlike COVID-19, the global influenza pandemic of 1918-19 killed many people who were in their 20s and 30s — yet as Snowden notes, there wasn’t much collective mourning for those young adults, despite dying in the prime of life.

“People were so used to mortality because of the [first world] war that even the horrible tallies that were coming with the Spanish influenza had lost their capacity to horrify the way that one might expect,” he says.

When we do compare death tolls, what exactly are we comparing?

The effort to compare the death toll of the pandemic with that of a war strikes historian Sam Biagetti as an especially “modern” exercise.

“Through the vast majority of human history, people have understood warfare and disease to go hand in hand and to be inextricably linked,” says Biagetti, who is the creator and host of the podcast Historiansplaining.

The flu pandemic 100 years ago was fueled by the conditions of World War I and ultimately killed more people than the war, with an estimated 50 million flu deaths worldwide and upwards of 700,000 flu deaths in the U.S.

“All those millions of deaths were another outcome of the war, and people didn’t understand them necessarily as two separate phenomena,” he says.

In fact, before World War II, combatants were far more likely to die of an infectious disease than from battle-related trauma. Biagetti points out that World War II was the first conflict in American history in which combat killed more fighters than disease, a pattern which has continued since and reflects medical advances such as vaccines and antibiotics.

“We’ve really changed how we think about war, in a way that is misleading and distorting — this idea you can kind of sum up the toll of a war just by counting the bodies from the battlefield,” Biagetti says.

Official military records are one way of assessing a conflict’s lethality, but they have limits, which is why Biagetti views them as inadequate for understanding the full breadth of the impact of these historical events.

The carnage of war doesn’t end just because peace is declared. The chaos and turmoil often fuels further death, as the influenza pandemic did in World War I. The spillover effects of war continue long after formal hostilities end, and include disability and disfigurement, mental trauma, addiction, homelessness and suicide.

For all these reasons, Biagetti worries about comparing the current pandemic to any war, even if just for the purpose of counting the dead.

“You can’t just try to sum up in a simple statistic, how big is this disaster versus that disaster, as if they can even be summed up in a simple number at all.”

And yet the language of warfare permeates so much of the national discourse about the pandemic.

Nurses work on the “frontlines.” Coronavirus is described as an invisible “enemy.” The country is “battling” the virus.

As a metaphor, ‘war’ becomes a call to action, and a recognition of sacrifice

On Jan. 15, President-Elect Joe Biden announced his vaccine distribution plan, declaring: “We’re in a war with this virus.”

Five days later, in his inaugural address, he said: “It’s taken as many lives in one year as America lost in all of World War II.”

Some Americans whose relatives have died from COVID embrace the rhetoric of war, and believe comparing the pandemic to past wars is imperative.

“The scale of this is that of a war, it’s just a different type of war and it’s not one that we’re necessarily taught in our history books,” says Kristen Urquiza, who co-founded the advocacy group Marked By COVID after her father died from the disease over the summer.

Urquiza believes that the country struggled collectively to respond to the coronavirus because Americans have little understanding about what it takes to overcome a pandemic.

“In a way, it’s sort of more dangerous [than war] because we are culturally unprepared for it.”

There are also veterans who feel the war analogies are appropriate, and even helpful. Dr. Cleavon Gilman, an emergency physician in Yuma, Ariz., has treated COVID-19 patients from the early days of the outbreak, readily compares the pandemic to a war.

“It’s very hard to communicate the severity of this pandemic if you’re not in a hospital, where this war is being waged,” says Gilman, who served as a Marine combat medic in Iraq in 2004.

World War II was the deadliest war in human history, but not in American history: that distinction belongs to the Civil War. The death toll has traditionally been estimated to be about 618,000 but new research indicates 750,000 may be more accurate.

But World War II looms large in America’s cultural memory as a “good war,” one that united the country against a clear-cut enemy, says Catherine Mas, a history professor at Florida International University who studies the history of medicine, race and religion.

In retrospect, the American response to World War II stands in sharp contrast to the current political divisions over the coronavirus, and the fragmented and uneven national response.

Despite the differences, Mas says the comparisons can still be powerful tools as the country tries to reckon with a crisis that has taken place out of sight for many Americans. People are dying in hospitals, without family members at the bedside, and only healthcare workers are there to bear witness.

“The reason we want to compare COVID-19 deaths to something like World War II is not just because the numbers are there, but to acknowledge this is a significant rupture in society,” she says.

“This mass death is going to create trauma: how are we going to deal with that? How have we dealt with that in the past? I think it’s part of our human condition to try to search for some reference points.”

This story was produced in partnership with Kaiser Health News.