The U.S. abortion ruling resonates especially with Catholics. Their response is especially complex 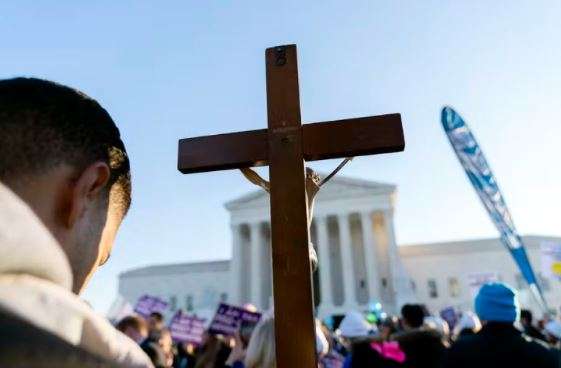 Friday’s U.S. Supreme Court ruling overturning the constitutional right to abortion resonated especially strongly among Roman Catholics — but the response to it among Catholics in South Florida is an especially complicated one.

The Catholic church opposes abortion under any circumstance. So, many Catholics here are celebrating the Supreme Court decision. But abortion is still legal in Florida; although starting Friday, it’ll be limited to the first 15 weeks of pregnancy. And many Catholics say they’ll work hard now to push state legislators to pass a complete ban.

“We’re extremely grateful for this decision, because we strive to protect human life from conception to natural death,” said Angela Curatalo, who directs the Catholic Archdiocese of Miami’s Respect Life Ministry.

“So this is going to put the decision back into the hands of the state. And the 15-week ban is just a start in our mind.”

“In the meantime we’re going to continue to walk alongside women and provide services to support them to choose life.”

Still, reliable polls show most U.S. Catholics — like most Americans — support abortion rights. (In an AP/University of Chicago survey released this month, 64% of U.S. Catholics said abortion should be legal in most or all cases. A Pew poll in May showed 56%.)

Among them is Gloria Romero Roses, a Miami entrepreneur who’s on the Florida board of the nonprofit Catholics for Choice. She says pro-choice Catholics also will be working hard now — to keep abortion rights intact in Florida.

“I am pro-choice not in spite of my faith but because of it — what we in the Catholic faith have learned as the social justice tradition,” Romero Roses said.

“Abortion bans make it harder for those struggling to access reproductive healthcare to do so.”

Over the weekend, several Catholic priests told WLRN they would not bring up the Supreme Court abortion decision in their masses. One said he wanted to “let the public temperature drop first.”