The Supreme Court Vacancy And Implications For Florida 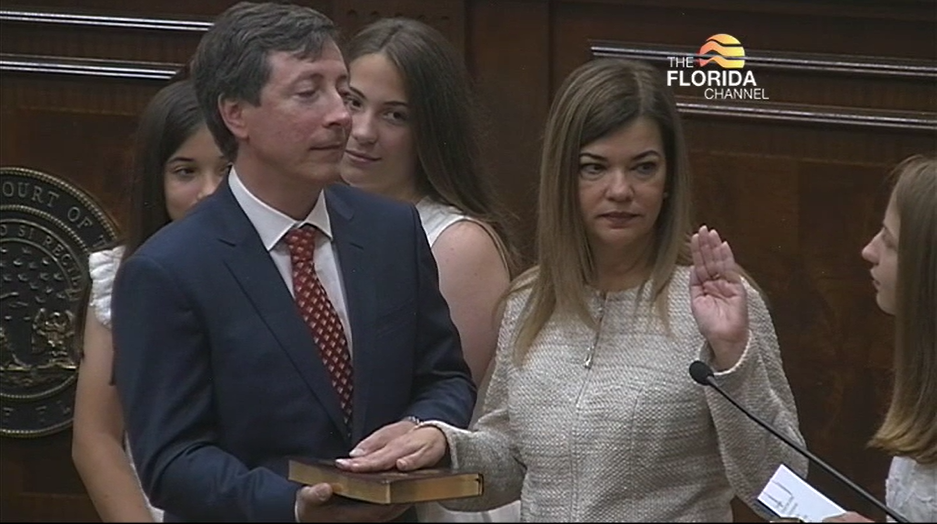 Justice Barbara Lagoa is sworn into the Florida Supreme Court on May 5th, 2019. Now a judge on the United States Court of Appeals for the Eleventh Circuit, Lagoa is said to be on President Trump's short list as a candidate to fill the US Supreme Court vacancy left by Justice Ruth Bader Ginsburg. Image: The Florida Channel

Judge Barbara Lagoa, on the short list to fill the seat on the Supreme Court, is seen as a candidate whose nomination could help the president win votes in Florida.

“What the Democrats will have to do is basically subsume the choice and focus on the issues,” said Batchelor.

He said issues like marriage equality, Roe v. Wade and the Affordable Care Act could help the Democrats turn out the vote in November.

“I think Donald Trump, the President is going to appoint someone appropriate, that’s going to have the right background educationally and professionally,” said Carmody of the nomination.

Carmody said US Circuit judge Barbara Lagoa is a strong contender, noting her rise through the judicial ranks.

“Under Governor DeSantis, she was elevated to the Florida Supreme Court and shortly thereafter to the federal 11th Circuit Court of Appeals. So recently, she’s had a pretty historic rise. Her background: educated at Columbia, very well educated, but she is Cuban American from Florida, in a swing state where attracting yourself to the Cuban American population is key for any candidate.”

However, Batchelor said the significance of the Cuban American vote may be overstated in this election.

“The other community that really you have got to focus on is the Puerto Rican community, which in the Kissimmee area is the second largest, Puerto Rican population outside of New York City,” said Batchelor.

Florida also made political headlines this week with Gov. Ron DeSantis’s proposed law cracking down on “violent or disorderly assemblies.”

Democratic lawmakers have denounced the proposal.

Carmody said he believes the governor is pushing for a safer environment for law enforcement officers.

“Perhaps the timing of this announcement is related more to the elections, but I 100% believe he’s committed to this position and the legislation he’s pushing and it’s not just because it’s politically convenient,” said Carmody.

“I would hope the legislators,  those who are conservatives, constitutionalists, I would hope legislators will look at and say, Look, this is crazy. You can’t do this. You cannot deny people the right to protest.”