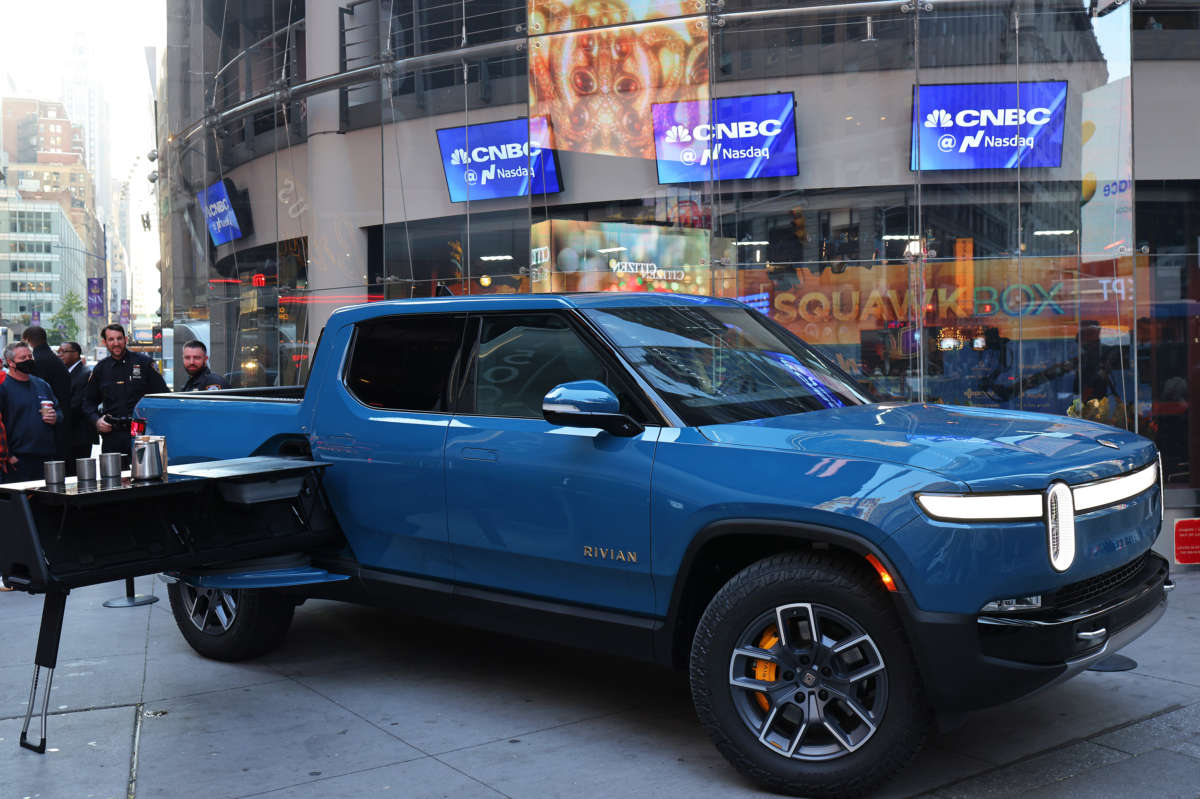 Rivian has made only a few hundred electric pickups. But investors are betting on its future.
Image credit: Michael M. Santiago

With two gleaming pickup trucks and the Georgia Capitol’s gold dome behind him, Gov. Brian Kemp announced a $5 billion electric vehicle plant was coming to Georgia.

At the rollout event earlier this month, Kemp called his state the economic engine of the Southeast “and now a world leader in electric vehicles and electric mobility.”

A bold statement, to be sure, but the company Kemp helped lure to Georgia is indeed a big deal. Rivian is one of the hottest electric vehicle startups. And while it has produced only a few hundred pickup trucks so far, the California company is already valued more than Ford Motor Co. Amazon has committed to buying 100,000 of Rivian’s electric delivery vans.

Companies like Rivian are helping drive the automotive industry’s electric future. When they look to build new plants, states go all out to woo them. Sun Belt states like Georgia see an opening to chip away at the auto dominance Michigan and the Motor City have cemented for over a century.

So why did Georgia win Rivian’s splashy new investment and the 7,500 jobs that the company says will come with it?

Well, there’s money … lots of it. And while details of Rivian’s deal with Georgia aren’t public yet, incentive packages from state and local governments typically include tax breaks, cheap, shovel-ready megasites, infrastructure upgrades and workforce training.

But that’s not everything.

He says the auto industry has a growing footprint in the Southeast.

In all of those states union strength is low, and that’s enticing for many companies.

“That has played a major factor in really the rebirth of manufacturing all across the Southern belt of states,” says Pat Wilson, Georgia’s economic development commissioner, who helped secure the Rivian deal.

The Sun Belt has attracted other new investment in electric vehicles, especially from startups.

Tesla is building a “gigafactory” in Texas. And Georgia had already landed one big battery plant.

“There’s a whole ecosystem that has to be created in the United States, so every time you form a piece of that ecosystem, it helps with the next one,” Wilson says.

The ecosystem needed to build cars and trucks already exists, according to Michigan Gov. Gretchen Whitmer. And she says it’s in Michigan. Georgia and the Southeast are hardly the only places vying for all this new investment.

“It’s time to put the world on notice that Michigan remains the center of high tech electric vehicle production in the U.S.,” Whitmer said in September.

Michigan alone attracted more auto investment in the decade after the Great Recession than the entire South combined. And the state has scored some big electric vehicle projects. GM is expected to invest in a battery plant outside Lansing, Mich., and Ford will churn out all-electric F-150 pickups from its River Rouge Plant in Dearborn.

Still, most investments so far in Michigan have been from legacy automotive companies, not the buzzy startups. This fall, Michigan launched new incentive programs designed to compete for those projects, spurred in part by losing out on electric vehicle investments from Detroit-based Ford and GM being made in Tennessee and Kentucky.

“The amount of investment going on in the auto industry right now is off the charts, and every state is trying to be that future capital of electrification,” says Kristen Dziczek, senior vice president for research at the Center for Automotive Research in Michigan.

The Biden administration has set a target for half of all new vehicles to be electric by 2030. While governors may claim their state will lead the electric vehicle future, Dziczek says it’s anyone’s game.

“It’s not entirely clear who owns this landscape,” she says. “That’s why I’m like, everything’s up for grabs.”

Whatever geographic reshuffling happens could shape the industry for decades to come.

This new Rivian plant guarantees Georgia, at least, will be a real player.