The Speed Limit In Everglades National Park Is 55 mph. Is That Harming Wildlife? 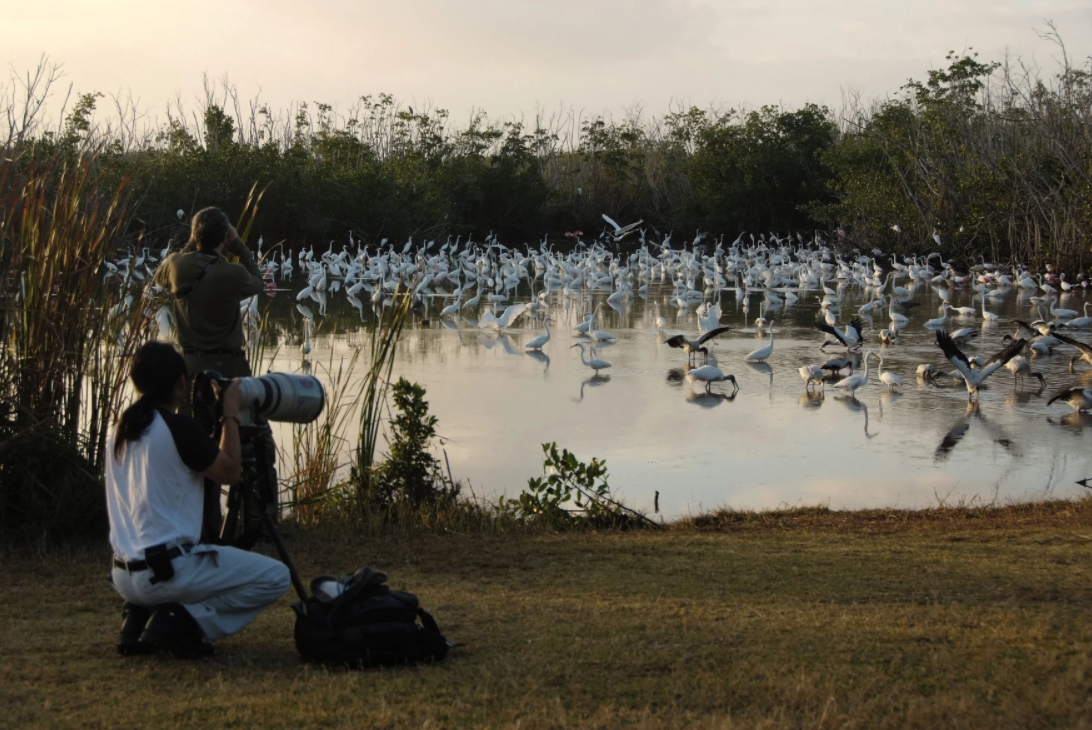 Every winter birders, like these here, head to Everglades National Park to look for migrating birds.

Earlier this month, birders at Everglades National Park spotted a rare sighting: a pink-billed snow goose that migrates from the northern tip of Canada to Mexico but hardly ever veers east to make an appearance in South Florida.

Attorney Dennis Olle got a text about the bird and headed down the next day.

But before he could get to Paurotis Pond along the main park road where the bird was spotted, another text arrived: Never mind, the snow goose had been hit by a car.

For Olle, an avid birder and president of the North American Butterfly Association’s Miami Blue Chapter, the death was a final straw.

For the last year, Olle had been complaining in emails and letters to Park Superintendent Pedro Ramos about the 55 mph speed limit on the main road, the same speed limit as I-95 and expressways through downtown Miami.

“There’s the Coe Nature Center, the toll gate and then what I’ve dubbed the speedway to the Flamingo Marina,” he said.

Olle asked if the park had looked at lowering the speed limit. In his 40 years visiting the park, Olle said the numbers of animals he’s seen dead along the main road seems to be increasing.

“In a sense, the snow goose is an anomaly,” Olle said. “I’m much more concerned about the indigo snakes, the rattlesnakes, the amphibians and the resident bird life, because we have some extraordinarily rare stuff,” he said.

Ramos wrote back in October 2019 that while park officials had discussed the issue, they decided to keep the speed limit at 55 mph. Ramos said park staff made special efforts to remind visitors when they enter the park and posted reminders to look out for wildlife on electronic message boards. Rangers also tried to watch for speeders, he said.

Olle wrote again, saying the efforts weren’t working and asked if any studies were done to look at roadkill. When he didn’t hear back, he emailed.

In March, Ramos replied that no studies had been done and “the decision to maintain the established speed limit comes down to the fact that we only have anecdotal evidence of the mortality and do not have a good understanding of details such as frequency, locations, species, and death versus injury.”

WLRN contacted the park, but a spokeswoman said they were unable to answer questions Friday.

Considering the amount of monitoring done in the park to track water quality, peat collapse and other issues, Olle said he was genuinely surprised to learn traffic impact was not considered.

“A lot of the stuff that they keep track of is not easy to do. It requires a science degree and then something,” he said. “This is just traffic patterns.”

Having a speed limit equal to an expressway also seems like a bad idea in a national park with a host of endangered and rare animals.

It’s also not the kind of experience likely to draw visitors, he said.

“I submit that speeding and road kill,” he said, “leads to an overall negative experience.”