The Space Station Gets A Coffee Bar 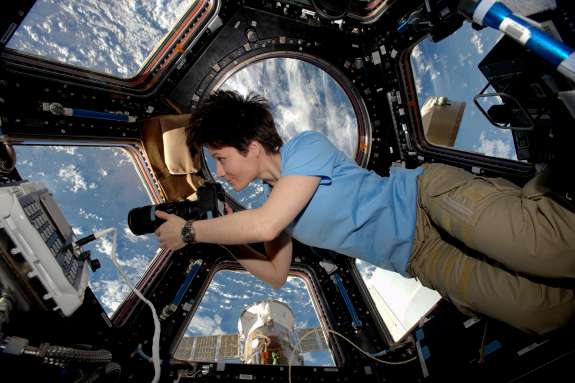 In space, all they have is instant.

But, she adds, “can it compete with brewed espresso? No.”

And that is a problem, particularly for the Italian astronauts that occasionally come to the station. In 2013, Luca Parmitano reportedly said the only food he missed from Earth was espresso coffee.

Now a resupply mission with a space-aged espresso maker is coming to the rescue of Italy’s current astronaut aboard the space station, Samantha Cristoforetti.

The machine was designed by Argotec, an Aerospace company based in Torino, Italy, together with the Italian coffee company Lavazza.

The ISSpresso is a box about the size of a microwave. You put in a pouch of water, add a little capsule of espresso and press the button marked “brew.” The espresso comes out in a second pouch. (Avino says the Italians are still trying to develop a little cup that will work in zero-Gs.)

As The Salt has reported previously, this is an experimental machine. Nobody’s sure how all coffee and steam will behave in zero gravity, and they’ve had to take extra safety measures, including steel tubing and lots of sensors. Avino says he’s confident hot espresso won’t squirt into the cabin.

Assuming it works, Italian astronaut Cristoforetti will probably get the first shot, but Avino says the machine is for everyone.

“Everybody can join and can also be happy getting an espresso coffee,” Avino says. “And this will be also a great occasion, you know, to all meet together and [have] a coffee all together on the station.”

It’s perfect for the astronauts, but NASA’s Vickie Kloeris is anxious. “Each cup has an individual capsule that has to be packaged separately. So there’s a lot of trash and a lot of volume involved in it,” she says. Getting things in and out of space is expensive, and Kloeris says NASA managers are still trying to figure out how to deal with all those finicky plastic pods.

Assuming it works, she thinks the astronauts will soon be needing more: the machine comes with just 20-30 coffee capsules.

“We’ll see how it goes,” she says. “If it’s successful, then we’ll have to figure out how we’re going to resupply it.”