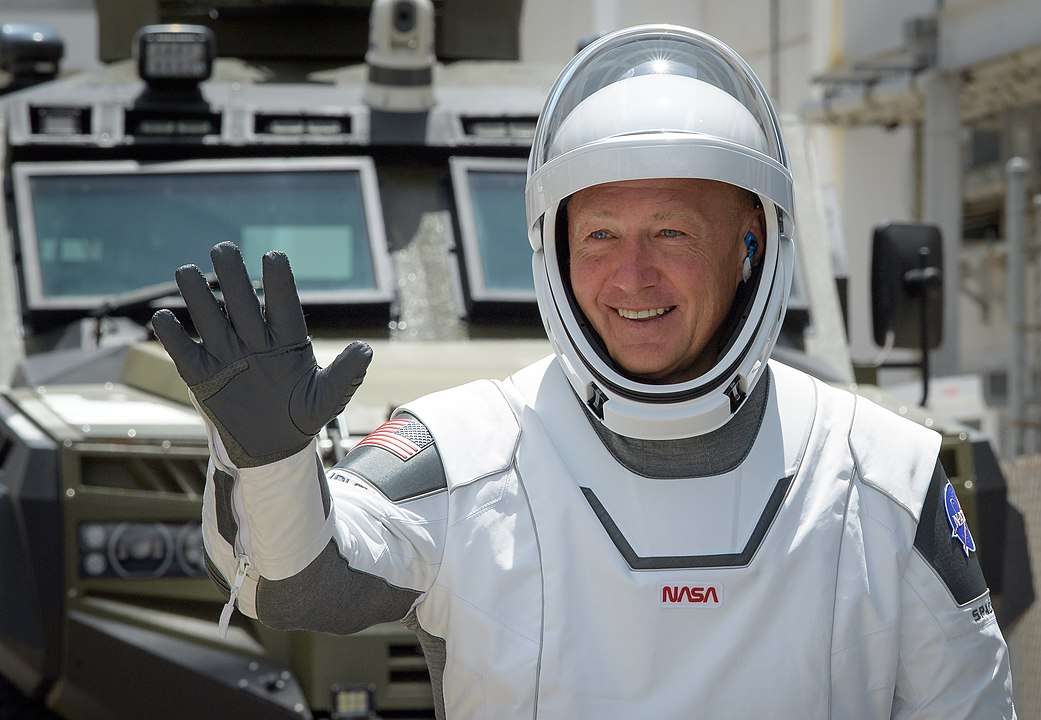 NASA astronaut Douglas Hurley waves as he and fellow crew member Robert Behnken depart the Neil A. Armstrong Operations and Checkout Building for Launch Complex 39A to board the SpaceX Crew Dragon spacecraft for the Demo-2 mission launch, Saturday, May 30, 2020, at NASA’s Kennedy Space Center in Florida. Photo: NASA/Bill Ingalls

Astronaut Doug Hurley commanded the first human mission of SpaceX’s Crew Dragon capsule in 2020. Before that, he piloted the final Space Shuttle mission in 2011 among others, clocking more than 92 days in space.

Hurley retired as a NASA astronaut last year. Now, he works for Northrop Grumman which builds the Solid Rocket Boosters — the two towering white cylindrical rocket motors that will give NASA’s SLS rocket and the Artemis I mission a big boost from the launch pad Monday.

BRENDAN BYRNE: Doug, you commanded a vehicle for the first time that humans were on it with Crew Dragon and Falcon 9.  When you’re watching this uncrewed mission, from your perspective, what are things that  astronauts who may be riding on this vehicle are going to be watching for this launch?

DOUG HURLEY: Great question. For us it was very similar mindset when we flew Crew Dragon the first time. We had an uncrewed test flight just like this. We also had a uncrewed in-flight Abort test, which was another confidence booster the team. You want to see the ground team, the contractor team, the integration team — all those teams Mission Control coming together, and kind of hitting their stride. I think we’re ready for that now. This is that next test — the uncrewed test flight. We want to make sure we do an end to end test.

The heat shield is one of the big test objectives, probably the biggest: How it’s going to react to the reentry speeds. But it really is, and for all the different components, including our boosters, so we just want to make sure all those things work.

I would also say that we’re really stretching things with a 42 day mission that stretches some of the components pretty drastically because we’re not planning on doing that with Artemis II. You just want to make sure that you have confidence that everything’s going to work the way it’s supposed to when you put crew on it.

HURLEY: I haven’t been there in a little while — about a year. But you know the traditional approach is always we are integrated, start to finish, certainly on the operational side of things — where the human in the loop stuff occur — and just making sure that everything works the way it’s supposed to from that perspective.

HURLEY: It’s just a simple case of hopefully, you’re one of the lucky ones that gets to ride this thing or walk on the moon.  It’s really is an incredible time to be in human spaceflight. Those folks have worked a long time to get there and I’m excited for them. I know a lot of them pretty well. And it’ll happen when it happens — when the hardware is ready for us to go do it. But be excited for them.

BYRNE: And finally, Doug, it’s been a long time since folks like me on the Space Coast have seen a solid rocket booster ignite since the end of the Shuttle program remind us of what we’re going to see with these SRBs. And hear.

And it’s a really bright flash from the bottom of both of them. And then it’s roughly five or  six seconds later when you feel the shockwave, hear the noise. But by then the rocket will be well clear the tower. And that crackle of a solid rocket booster is unlike any other launch noise that you’re going to hear. It’s completely distinguishable from everything else. So it’d be it’s just going to be incredible to see this giant, almost seven-million pound vehicle launch.