The Salmon Cannon: Easier Than Shooting Fish Out Of A Barrel 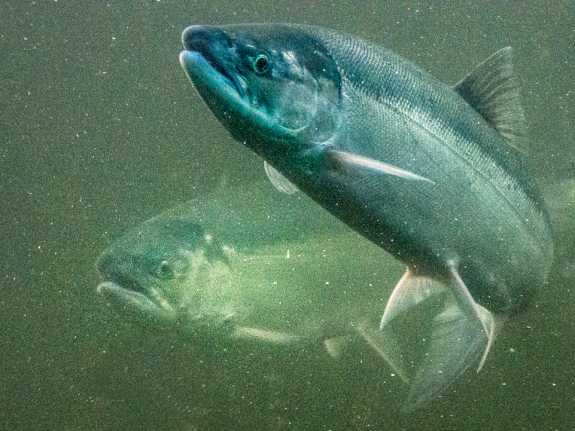 Across Washington State, hydroelectric dams are blocking salmon as they migrate to their spawning grounds. Enter the salmon cannon.
Image credit: Ingrid Taylar

Ever since rivers have been dammed, destroying the migration routes of salmon, humans have worked to create ways to help the fish return to their spawning grounds. We’ve built ladders and elevators; we’ve carried them by hand and transported them in trucks. Even helicopters have been used to fly fish upstream.

But all of those methods are expensive and none of them are efficient.

The device uses a pressure differential to suck up a fish, send it through a tube at up to 22 mph and then shoot it out the other side, reaching heights of up to 30 feet. This weekend, it will be used to move hatchery fish up a tributary of the Columbia River in Washington.

The device was developed by Whooshh Innovations in Bellevue, Wash. CEO Vince Bryan tells NPR’s Linda Wertheimer that the word “cannon” is a bit of a misnomer: the device looks like a cannon, and shoots fish out like a cannon, but unlike the weapon, this device is designed to move items gently.

Bryan says that despite their journey — which takes them out of the water for the duration of their flight — the fish don’t seem worse for the wear.

“From the very beginning of the test that was a concern,” Bryan says. “It may be just ten seconds to go as much as 250 feet … [but] there seems to be no effect. The fish enter the water and swim away.”

Compared to scaling a 350-foot high dam, it’s a relatively easy way to get from point A to point B. Although the first test is with hatchery fish, state agencies are studying the cannon to see if it can be used in rivers where federally protected species of wild salmon are migrating.

Bryan says his company’s vacuum technology was originally designed to transport fragile fruit in Washington’s apple and pear orchards. Whooshh created a vacuum tube that allowed pickers to drop the fruit into a tube attached to their waist, where it was sucked up and sent down the line — all with no damage to the fruit.

In fact, a lot of things were sent through the vacuum contraption before salmon, Bryan says, including potatoes — with a French fry cutter on one end of the tube.

“So the potatoes went through the tube as a whole potato and when they came out the other side they were French fries,” he says.

“There really is no limit to what we can move,” he says.

He says the physics works the same whether it’s a fish or person — the tricky part is sticking the landing.