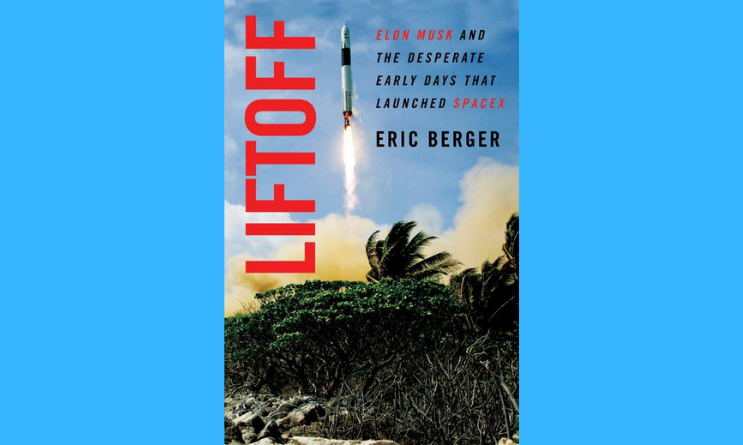 On a Saturday afternoon in May 2020, NASA astronauts Doug Hurley and Bob Benhken were atop SpaceX’s Falcon 9 rocket at Kennedy Space Center, strapped into their seats inside the Crew Dragon capsule. The countdown clock reached zero and the nine engines below lit up to a rumbling fury, propelling the duo into the Florida sky on a mission to the International Space Station.

It’s hard to imagine a time when the aerospace company struggled. SpaceX routinely lands its first stage booster on a barge at sea, has sent nearly two dozen resupply missions to the station and launches its Starlink satellites into space at a rapid pace. But at one point it looked like the company might never leave the ground. Eric Berger, journalist and Ars Technica’s senior space editor, chronicles the company’s desperate first years in his new book Liftoff: Elon Musk and the Desperate Early Days That Launched SpaceX, starting with SpaceX’s founding in 2002 and ending with the successful launch of Falcon 1 in 2008.

Berger spoke with some of the earliest employees at SpaceX along with founder and chief engineer Elon Musk, casting the first public glance at how SpaceX almost never was and how the gritty, determined and sometimes even reckless engineers gave it their all to get SpaceX’s first orbital rocket Falcon 1 into orbit.

“It’s a story of a company that although it was founded by a multimillionaire still had limited resources,” said Berger. “It faced a lot of hurdles that companies today don’t. There were no private companies launching liquid fueled orbital rockets back then.”

LISTEN: Author Eric Berger spoke with WMFE’s Are We There Yet? About SpaceX’s early days and how overcoming those early challenges helped propel the company into the future.

Some of the stories have never before been told and any follower of SpaceX will find them compelling. Through Berger’s reporting, readers get an intimate look at the company from the perspective of these intrepid engineers attempting the nearly impossible.

In the early days of the company, Musk used his personal fortune from PayPal to finance SpaceX, along with his electric car manufacturing company Tesla, all while balancing a crumbling family life — struggling to finance both business ventures during the great recession.

“He has this rare drive that never turns off,” Berger said of Musk. “He is constantly focused on the task at hand. Typically he likes to take on the most challenging engineering problems first and solve those, then move on to the easier ones.”

SpaceX’s early success — and struggles — are not a product of Musk alone. The engineers and technicians working on the Falcon 1 were building a liquid-fueled rocket from scratch, which had never been done by a private company before. They were manufacturing their own parts, writing their own code for the rocket’s computer. And sometimes they were doing this in the middle of the Pacific Ocean at SpaceX’s launch facility at the remote Kwajalein Atoll in the Marshall Islands, some 5,000 miles from California.

“One of the hidden talents of Elon and really the secrets of the success that SpaceX had was the fact that he was really good at identifying smart and motivated young engineers who had had a bit of an entrepreneurial bent,” said Berger. “He was also able to know who among them would be willing to give their all for SpaceX.”

Zach Dunn was one of those early employees who gave it their all. With money and time running out, SpaceX made one last ditch effort to launch a Falcon 1 in September 2008. The company had one booster left and needed to get it to Kwajalein fast. SpaceX chartered a military C17 to transport it from the company’s headquarters in Hawthorne, CA to the remote launch facility on Kwajalein in the Marshall Islands.

“As they were descending into Honolulu, the first leg of this journey, they hadn’t got the pressures quite right,” said Berger. “The first stage started imploding. And very quickly, they needed to release the pressure on the interior of this rocket or would have imploded and crumbled.”

The only way to do that was to climb inside the rocket. Dunn navigated the dark interior of the rocket’s interstage, fighting off cables and sharp metal, to release the valve — all while flying 25,000 feet over the Pacific.

The launch of SpaceX’s Falcon 1 rocket from its launch facility at Omelek Island. Photo: SpaceX

That rocket would eventually reach orbit, launching SpaceX’s own payload, a mass simulator named RATSat. The momentum of that success propelled the company upward. A lucrative contract from NASA to ship supplies to the space station jump-started the development of SpaceX’s Falcon 9 and Dragon spacecraft. Commercial companies lined up to have their payloads launched into space at a fraction of the cost of other competitors.

Berger’s stories from the early days of SpaceX lay bare the relentless work, uncertainty and personal sacrifices early staffers faced while getting the company off the ground. Through dozens of interviews, Berger intimately reveals the drive and desire of these rocket pioneers and uncovers their motivation to risk it all on a company that nearly lost it all.

While SpaceX’s early success and meteoric rise can be attributed to its flashy founder Elon Musk, Berger’s interviews reveal the inner motivations of these employees to do something never done before and their personal investment into SpaceX’s success.

The work of the early days of these intrepid engineers laid the groundwork for SpaceX to change the launch industry landscape for years and arguable decades to come. SpaceX has nearly mastered the processes of landing its 167-foot-tall first stage boosters either by land or at sea. The company’s rockets light up the Space Coast with nearly weekly launches of satellites and payloads into orbit. It’s building a massive ship to one day take people to Mars.

Anyone who follows the current successes will enjoy reading Liftoff to understand just how far this company has come and how those early days of SpaceX are fueling its journey into the future.