The Roaring 2020s: Why We’ve Entered The Gilded Age Of Comic Books 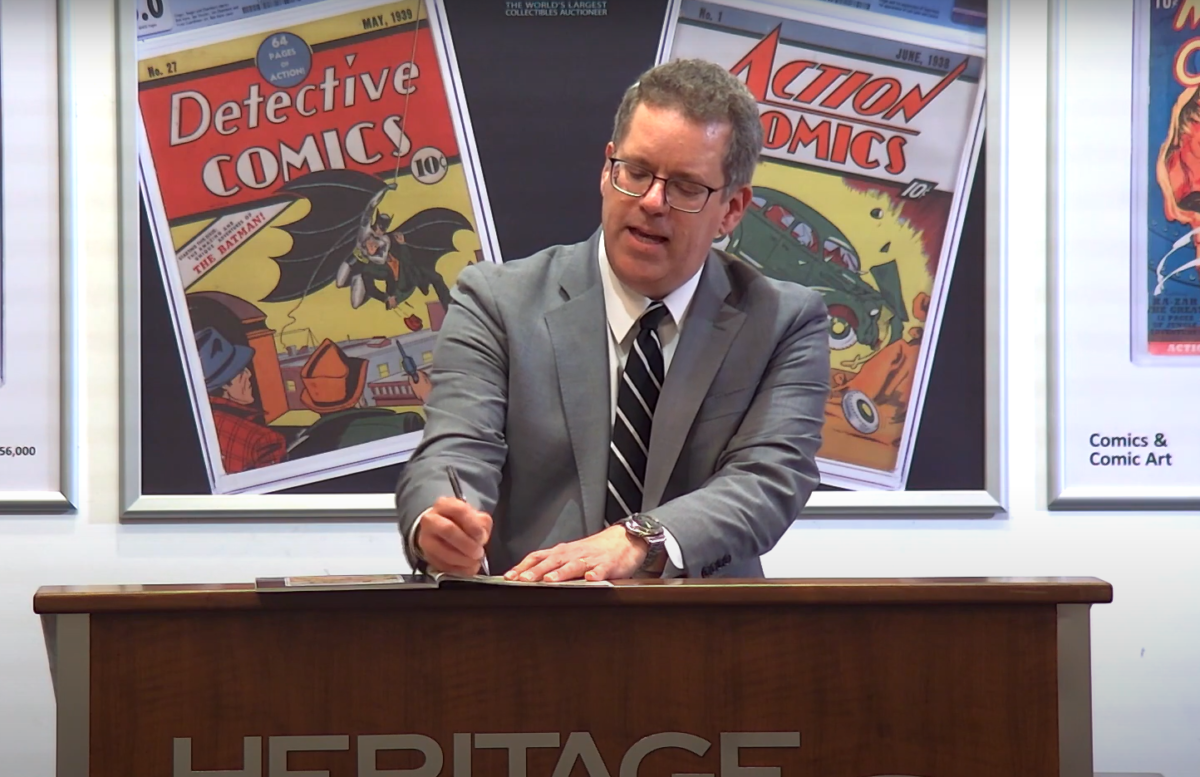 Barry Sandoval, vice president of Heritage Auctions, oversees the sale of Action Comics No. 1 for about $500,000.

Comics printed from the early 1930s to the late 1950s are considered the Golden Age of comics. Now, we’ve entered a whole new era of comic books: the Gilded Age of Comics.

Our story, true believers, begins with a classic battle: Batman versus Superman. But the setting for this battle isn’t Gotham or Metropolis. It’s an auction block in Dallas, Texas.

Detective Comics 27, the first appearance of Batman, sold for more than a million dollars at auction.

This was not a fluke, or a one-shot, or a retcon. During those three days at auction, a record $22.5 million dollars was spent on rare comic books. It shattered the previous record set just three months earlier.

You might think that a pandemic putting millions of Americans out of work would cause people to have to sell their comic book collections, driving prices down and making it a buyer’s market. But that isn’t what happened in the comic book world in the last year.

Take ComicLink, an online auction for comics that’s been operating for 25 years. The average price of a comic book sold at a Comic Link auction in April of 2021 was more than twice as expensive as in 2020.

“In hobbies, we talk about, death, divorce and debt as the three the three Ds of why people sell,” said Douglas Gillock, the consignment director with ComicLink. “When people make the decision to sell, sometimes it is under duress, and I’m sure that happened. But at the same time, there are also a lot of people whose financial position didn’t change. But they were also sitting in front of the computer all day at home, and probably had a little extra time on their hands when they weren’t commuting.”

Gillock thinks one driver is a younger generation now collecting comics, fueled by the success of the Marvel Cinematic Universe. But also more people are seeing comics as a financial asset with a pretty good return on investment.

“Comic books in particular, I think they’re viewed both as an asset with a pretty good track record of return – and in some cases, extreme, extreme returns — but they’re also fun to own,” Gillock said. “There’s pride of ownership involved in it. People are invested financially, but they’re also invested emotionally.”

One place where the Gilded Age of Comics is having real economic impacts is in sunny Sarasota Florida. There are high fences, security guards and video cameras everywhere at Certified Collectibles Group.

And there is an actual vault, like something Joker’s goons would have to crack. But instead of mob money, it’s overflowing with pallets of comic books next to tightly packed shelves.

“It looks like the end of the movie Raiders of the Lost Ark back there,” said Vince Oliva, a grader with CGC. “We are overwhelmed with books right now. I don’t know if COVID had anything to do with it, maybe not going to movies and not going to concerts, not going to ballgames. People might be staying home and looking for things to do. And collecting has always been a passion of a lot of people.”

Oliva’s job is to grade comic books on a 1 to 10 scale. It’s a fascinating business where the difference between a 9.6 and a 9.8 can be thousands of dollars.

He picks up a copy of Fantastic Four No. 1. It’s the first appearance of The Fantastic Four – and thus, Marvel’s first superhero team. Take that, Avengers.

At first glance, the comic looks gorgeous. But Oliva’s superhuman sight can see missing pieces of the cover have been replaced, splits in the paper have been repaired, the spine was reinforced. He can tell just by the feel of the paper that the cover has been removed from the book and soaked in a solution to clean it.

It’s not a forgery. But it has been professionally restored.

Vince Oliva with CGC grades a copy of Fantastic Four No. 1.

This copy of Fantastic Four No. 1 was restored. “And it’s still a very valuable book. But instead of a half a million dollars, now this might be, oh gosh, probably something more in the $10,000 to $15,000 range.”

After a comic book is graded, it’s brought to the slab department. Here, comics are sealed in carbonite, kind of. Machines hiss while books are encased in a clear hard plastic that will crack if you try to open it. It’s the backbone of a system where people buy and sell comic books online without seeing the merchandise until it arrives at your doorstop.

Grading, authenticating, slabbing: It all takes people – a rare commodity in the pandemic. Which has led to backlogs. A two months turnaround for comics is now five months. A Pokemon card has a year turnaround.

“We definitely got caught a little off guard with how busy things would become over the last year,” said Max Spiegel, president of CCG. His company is now offering $2,500 hiring bonuses to get more employees.

Certified Collectibles Group in Sarasota, Florida, has gone from 300 employees at the start of the pandemic to more than 500 employees. “And I think by the end of the year, we could have 600 or 700 employees.”