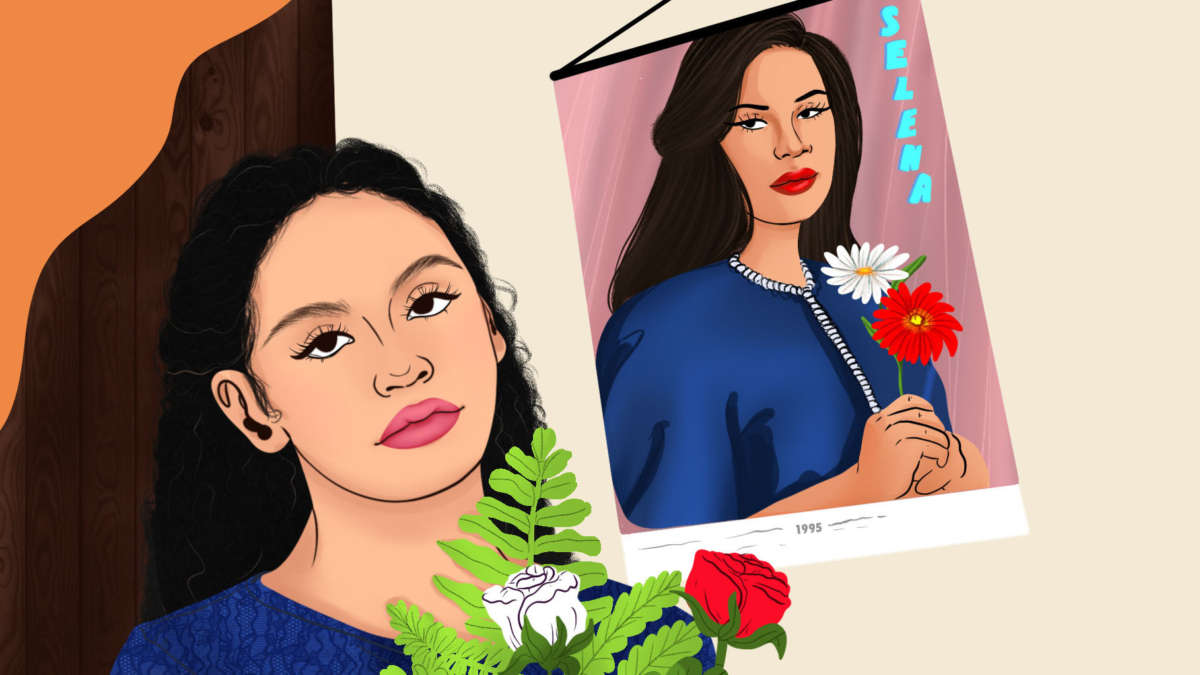 Anything for Selena weaves the life of the late Tejano singer together with that of the podcast's host, Maria Garcia.
Image credit: Illustration by Iliana Galvez

The new podcast Anything for Selena, from NPR member station WBUR, doesn’t begin with the late singer’s biography or her most popular songs. Instead, it starts on the U.S.-Mexico border, with a narrator describing the creosote plants that grow there in vivid sensory terms.

“It has this unforgettable smell when it rains,” the voice says. “It’s slightly floral, but mostly it’s this very specific, cool earthy desert aroma. And there’s usually a calm clear breeze, which carries these concentrated little pockets of fragrance.”

Selena Quintanilla was known as the queen of Tejano music until her death in 1995, when she was killed at age 23 by the president of her fan club. The podcast is about Selena and her music — but in many ways it’s also the about the program’s host, Maria Garcia, who spent her young life on both sides of America’s southern border.

Garcia spoke with NPR’s Ari Shapiro about the genesis of Anything for Selena and the particular resonance of the artist today for those who grew up in the shadow of her career. Hear the radio version at the audio link, and read on for an edited transcript.

Ari Shapiro: You begin the podcast by describing the smell of the plants on the U.S.-Mexico border. Why did you want to start the story with this strong sense of place?

Maria Garcia: Because it’s the place that made me. I feel like that place isn’t just this, like, boundary on land. That place also feels like this gash inside of me.

I was born in Ciudad Juárez . We moved to the States when I was three, but we went to Mexico every week. And so, my early life was literally split down the middle in two countries. The U.S. during the week, at school, where I was “Mary” — where the first day of school, my teacher just decided to anglicize my name without the permission of my parents. Being “Mary” half of the week and being “Maria” in Mexico, the other half, I was so aware that on either side of the border, it felt like the half of me was missing. And so I couldn’t tell Selena’s story without including that lens.

Explain why the story this show is aiming to tell about Selena is so connected to this story that you tell about yourself, being split down the middle by this border.

Because she was the very first person I witnessed who embodied these two parts of myself, and she did it with such grace. Even at a young age, it was astounding to me to see a woman who was so proud of this identity that felt like it had been derided by the world.

When I was a young girl, I would go back to Mexico and my cousins and my friends there started calling me a pocha. Which is a horrible insult in Mexico — it’s made against somebody who [you feel has] ruined the culture and the language with this sort of crass, working-class sensibility. I felt this rejection forming in Mexico, and then, in the U.S., I also felt out of place. So to see somebody who was beloved in both places without compromising herself, without sort of contorting herself, without code-switching, was incredibly profound for me.

So, there was a big hurdle that you had to clear before you could even begin to tell this story. What was it?

Well, we couldn’t make this podcast without her art — without Selena’s songs. And I knew that I had to get the green light from her father, from Mr. Quintanilla, who is notorious for sort of guarding her legacy with an iron fist.

And the family actually turned you down — they denied your request for permission. But then, before the pandemic, you flew down to Texas without any guarantee of a meeting with Abraham Quintanilla, Selena’s father. I know you can’t read his mind, but if you had to guess what it was you brought in that meeting that others did not — that made him change his mind and say yes — what would you guess?

I think it’s that I genuinely wanted to know him. I wanted to really understand the person who raised Selena. And Selena talked about him all of the time — not just as her father, but as her mentor, as a sort of guiding light in her creative force. And they had a huge, huge bond as artists. That story hasn’t truly been told — like, the complexity of their relationship. And it shed light, to me, on these narratives about Latino fatherhood and Latino daughters and all these stereotypes we have. I just wanted to capture him as a human.

It seems like right now, there is this boom in love for this young woman who was killed in 1995: There was a popular Netflix series, there’s your podcast, and I could give other examples. Why do you think that is?

I think there’s a few reasons for it. One is, there’s a coming of age of people like me, people who have grown up in the age of so-called “Selenidad,” which is this idea that she’s become this symbol ripe for solidarity among Latinos. And two, we just haven’t advanced that much in representation. She was radical in the mid-1990s because even in Latin America, there just weren’t women like her on TV — women with brown skin, with sort of curvaceous bodies, people who clearly had Indigenous heritage in Latin America. Most of the people on telenovelas or just regular programing were white Mexicans or white Latin Americans, with light-colored eyes and very thin. And that’s why it was so powerful. That’s why Mexico fell in love with her. Journalists there were like, “Wow. She is a star of the people. She looks like the people.” And so, to this day, she’s the symbol we hold on to.