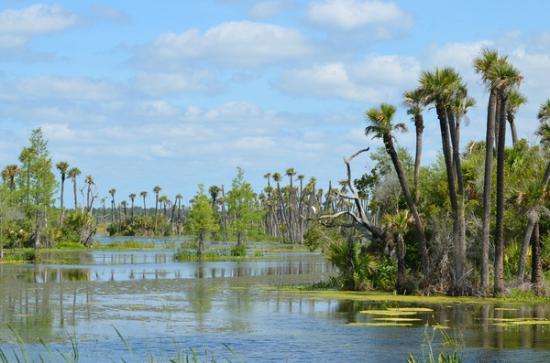 When you flush your toilet or turn your tap, be sure to thank the Orlando Wetlands Park. The 1,650-acre property in Christmas in east Orange County used to be a cattle pasture. Then the city of Orlando purchased the land for $5.1 million in 1986 to help treat water on a larger scale in response to population increase and the Clean Water Act of 1972.

Volunteer Bob Rope worked with the city of Orlando when the Orlando Wetlands Park was completed in 1987 and advocated for the wetlands to not only function as a filtration system, but also as a park open to the public from February through November.

“It could have been totally fenced,” Rope says. “The purpose of it is to clean up sewage, and so to some people it’s like, ‘Why would you make a park out of that?’”

Today, an estimated 15,000 visitors flock to the park annually to hike the 20 miles of trails. More than 220 bird species and 700-900 alligators live in the park. Wastewater from the city of Orlando flows from a treatment plant off to the park, where it’s processed through 17 manmade cells equipped with more than 2 million aquatic plants and 200,000 trees that filter out excess nitrogen and phosphorous.

Some people who’ve lived in Orlando don’t even know the park exists, says park manager Mark Sees, so every year it holds a wetlands celebration to invite the public to learn more about this park that does double duty as a waste-treatment facility and a scenic treasure. The festival takes place Feb. 21 at Fort Christmas Historical Park from 9 a.m. to 3 p.m.