The Opioid Crisis Is Surging In Black, Urban Communities 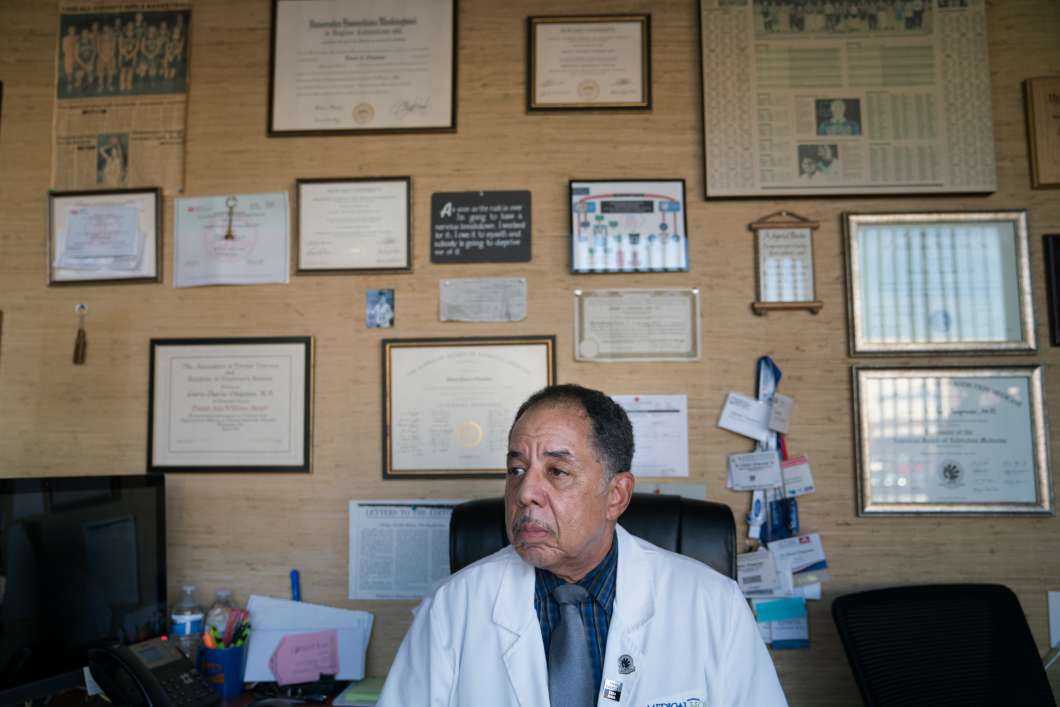 Dr. Chapman in his office at the end of the day on Friday. He waits for the last patient to come in, not wanting them to have to spend the weekend without their medication. The walls are covered with awards, certificates, newspaper clippings and family photos.
Image credit: Claire Harbage

The current drug addiction crisis began in rural America, but it’s quickly spreading to urban areas and into the African-American population in cities across the country.

“It’s a frightening time,” says Dr. Edwin Chapman, who specializes in drug addiction in Washington, D.C., “because the urban African-American community is dying now at a faster rate than the epidemic in the suburbs and rural areas.”

Dr. Chapman is on the front line of the opioid epidemic crippling his community in the Northeast section of Washington. He heads the Medical Home Development Group, a clinic specializing in addiction medicine.

About a dozen patients sit in the lobby of his clinic on a recent Monday morning. The clinic is on a busy street and even on the second floor, you can hear blaring ambulances whiz by — Dr. Chapman says often they stop right outside his building.

“Sometimes we’ll have a cluster of folks outside selling drugs,” he says. “We’ve had overdoses right outside, right under the building, right next door to the building.”

According to the Office of the Medical Examiner in Washington, D.C., overall opioid overdose deaths among black men between the ages of 40 and 69 increased 245 percent from 2014 to 2017.

Nationally, the drug death rate is also rising most steeply among African-Americans. Among blacks in urban counties, deaths rose by 41 percent in 2016, according to the Centers for Disease Control and Prevention.

African-American communities are in the midst of a drug epidemic and the culprit is fentanyl, says Dr. Melissa Clarke, who works with Dr. Chapman at Medical Home.

“African-Americans are falling victim to fentanyl and carfentanyl because they are so much more potent than heroin,” she says. Fentanyl is a powerful synthetic opioid that is often laced in heroin and other street drugs, says Dr. Clarke.

“People who’ve even been life-long heroin users are dying because they don’t understand how to titrate those doses,” she says. That’s a huge part of the challenge. It’s always been impossible for addicts to know the potency of street drugs, but with fentanyl in the mix, they’re even more dangerous now. “We feel like we have a fire underneath us — people are dying every day,” she says.

This epidemic started in white suburban and rural areas where people are overdosing mostly with prescription medicine like Percocet and OxyContin. Dr. Chapman says that African-American patients have historically been less likely to be prescribed pain narcotics.

“The theory is that African-Americans tolerate pain better. That’s a myth,” Dr. Chapman says. But it probably saved blacks from falling victim to the initial opioid crisis, he says.

On a recent Saturday morning, a crowd of mostly health professionals and a handful of patients gather at Dr. Chapman’s clinic. He’s organized an event to discuss this current drug crisis and to encourage people to come up with solutions to the epidemic. Dr. Chapman is warm and laughs easily, but he’s serious about tackling this epidemic head-on. His urgency comes from experience. Like many here, he’s a graduate of the historically black Howard University’s College of Medicine. He’s been practicing medicine for close to 40 years and for 12 years he ran the methadone clinic at the D.C. General Hospital.

“Those patients were very segregated from the community and only their substance abuse was treated,” he says. That experience taught him many lessons including the need to address patients’ overall health, not just their addiction. He also learned about the effects of incarceration on drug addiction — many addicts cycle in an out of prison, he says. His patient population is largely made up of African-American, long-term heroin users — many with a history of poverty and mental health problems.

“I’m always asked, ‘Why do you treat these folks?’ ” he says. ” ‘Aren’t you afraid to have people like that come into your office?’ ”

He says he sees drug addiction like any other chronic disease and treats a full load of patients with Suboxone, a medication that keeps his patients’ relentless cravings in check. He’s certified by the Drug Enforcement Administration to prescribe the drug, but by law he can only treat up to 275 patients annually due to federal provider treatment caps.

One of the challenges is debunking myths — “this is a chronic disease and not a moral failing,” he says, noting that science shows drug addiction is a brain disorder and some are more predisposed to it than others.

Dr. Chapman is soft-spoken, but his determination to fight this current drug crisis in his community is unwavering. He has partnered with several groups, including Howard University and the Johns Hopkins Urban Health Institute to share information and raise awareness. Fighting stigma is a big part of the battle against this epidemic, he says.

“Seventy-eight percent of the overdoses in the district are African-Americans,” says Dr. Chapman. “It’s just that the population has been totally ignored, they are invisible.”

He mentors young physicians to work with addicts. Doctors like Dr. Melissa Clarke, who is also certified to prescribe Suboxone. She says finding him wasn’t easy.

“Oh, like a needle in a haystack,” she says, “there are not a lot of practices out there that have fully embraced as much as Dr. Chapman has that medical home approach to care.”

Dr. Chapman’s father worked with the Urban League in Gary, Ind., where he fought hard to get black physicians hospital privileges in the 1940s. Chapman credits his father for his career choice and work ethic. He says he’s on a mission to debunk drug-related myths and fight stigma.

Larry Bing has been a patient of Dr. Chapman’s for two years now.

Mr. Bing is tall, handsome and he’s been to prison about seven times. He started using when he was 15. He’s tried to get off drugs several times before with methadone, a more conventional treatment offered by the D.C. government, but he relapsed four times. “Had I known about the Suboxone before the methadone, I would have tried it first,” he says.

But it still isn’t easy. “When you talk about addiction it ain’t necessarily just the drug,” he says. “It’s that lifestyle too that you crave.”

Larry Bing heard about Dr. Chapman on the streets from an addict friend who later died from an overdose. His treatment is covered by Medicaid and Medicare and he knows he’s lucky to have the support of his wife Evelyn. The Bings have been married for 22 years.

Evelyn Bing a, 67-year-old native Washingtonian who is fond of stylish hats, says her husband was already struggling with addiction when they met in 1992. Evelyn didn’t know. When she found out, she chose to stick by him, but she doesn’t wish that experience on anybody. “It was a horrific experience sometimes, it wasn’t easy. It was hard, it was sad, it was ugly.”

“I was terrified that something really happened to him.”

Unable to sit at home and wait, she prowled dark streets looking for him, she says, and her biggest fear was that he’d end up back in prison or dead. Though she’s grateful her husband found Dr. Chapman, she knows many in her community aren’t as lucky, she says. “I don’t think we as African-Americans are getting the best resources.”

And as the opioid crisis spikes in D.C., she says many African-Americans are desperate for help. “I’d like to see more Dr. Chapman’s, drugs off the street, crime stopped, more schools, more programs to educate on what using drugs do to people.”

Evelyn Bing says her husband’s life is improving and for that, she credits Dr. Chapman. “He listens and cares for his patients’ overall health” she says.

Dr. Edwin Chapman wants to galvanize his community to fight this drug epidemic. “It’s going to be what we do at the grass-roots level, on the ground, more so than what the federal government is doing,” he says. “This is very urgent.”

Dr. Chapman is unassuming, but forthright and passionate about his work. At 71, he says he can’t think about retirement — “not when my city is right in the middle of a raging epidemic.”