The National Senior Games are back. Meet two Pinellas women ready to compete 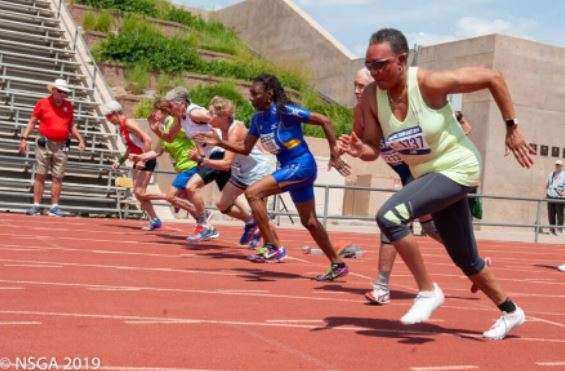 The 2022 National Senior Games in Ft. Lauderdale beginsMay 10th. They're the first national competition since the 2019 games in Albuquerque, NM. (Brit Huckabay/NSGA)

Almost 12,000 senior athletes are gathering in Broward County for the 2022 National Senior Games May 10-23. A pair of Pinellas County women who began their athletic journeys later in life will be among them.

Even at the age of 92, Joan Campbell doesn’t show any signs of letting up on her desire to compete. She’s been swimming at the games since she was 59 years old.

The Palm Harbor woman’s journey began when she attended the first Senior Games as a spectator in St. Louis in 1987, and she was inspired by what she saw.

“I was absolutely amazed at a blind woman that swam in the outside lane, and had a Labrador retriever barking when she was supposed to turn,” said Campbell. “It was just fascinating to me, so I became more involved.”

Joan Campbell, 92, is seen at the 2017 FINA World Championships in Budapest. She will compete in the 2022 National Senior Games in Ft. Lauderdale. (Courtesy Joan Campbell)

“I really enjoy the sport because it’s healthy,” Campbell added. “It helps me out. I’m a widow now. And I have something to do.”

Last year’s games were canceled because of the COVID-19 pandemic, so Campbell is looking forward to the event’s return.

The Senior Games include competitions in more than 20 sports.

But this year’s games also features a pair of panel discussions related to the 50th anniversary of Title IX the 1972 federal law that prohibits sex discrimination in education programs, including athletics.

One, Women Of The Games: A View of Title IX, features Kathrine Switzer, the first official competitor in the Boston Marathon; the second, Your Title IX Story: The Art of The Olympians, focuses on arts and sport. Both events will be moderated by NSGA Health and Well-being Director Andrew Walker of Pinellas County.

“I’m sure if Title IX had not been available, she would not have had that,” said Campbell.

But biases against female athletes wasn’t the only barrier that some competitors had to overcome. Davenia Navaroli, 70, is a Black woman who lived through Jim Crow.

“When I was young, living in Georgia, there were no pools for us to swim in,” she said.

Navaroli then moved to Florida, where there was one pool for colored people in her area.

“You went to the beach, that was segregated. Colors over here, and whites over there,” she said, adding that her faith kept her focused on the good.

“All this other stuff in secondary, I’m a woman of God,” said Navaroli. “I can do all things through Christ who strengthens me.”

Navaroli, who lives in Seminole, competed in her first triathlon at 56 years of age. But it took a little time for her to get there.

“I started taking swimming lessons, and I was terrible. I used to cry because I couldn’t swim,” said Navaroli. “But eventually, I got it. And now, thank God, I am a very good swimmer.”

She said that her favorite part about the Senior Games is simply participating.

“The whole idea of being a part of a big picture. And I’m in it. I’m in it. I’m not sitting on the side, I’m not cheerleading, I’m actually a participant. And that makes me happy.”

The National Senior Games are normally held in odd-numbered years. They’re open to adults over 50 who qualify at competitions held in all 50 states, as well as the Veterans Games and Canada Games.

The 2023 games will take place in Pittsburgh.