The Myth And Reality Of Florida Man 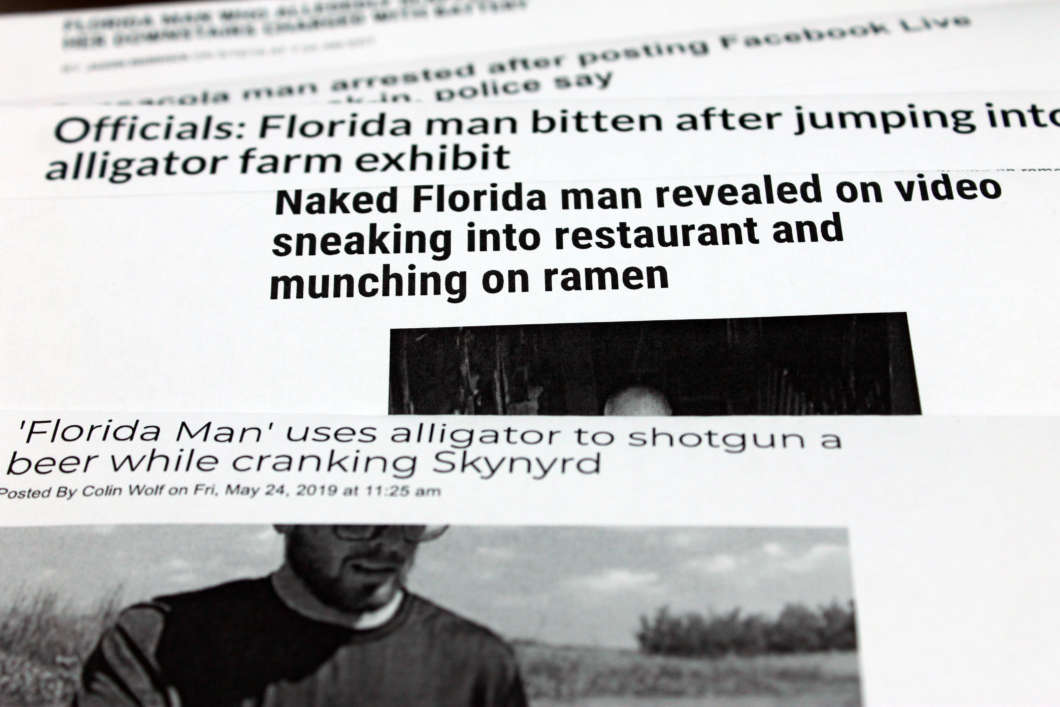 Florida Man is popular meme that’s grown out of news headlines about Floridians in bizarre situations. Matthew Peddie sat down with three guests to talk about the myth and the reality behind Florida Man.

Craig Pittman is a reporter for the Tampa Bay Times and the author of Oh Florida! How America’s Weirdest State Influences The Rest Of The Country . He is also a Florida native. Growing up, Pittman remembers how Florida was not always the laughing stock of the nation.

“We all thought California was the really weird state, y’know, that’s the one that all the late-night comics were joking about. I think that changed with the 2000 election recount, when the whole nation spent three weeks holding their breaths, waiting to see what we’d do about picking the next leader of the free world and they saw us doing all kinds of  bizarre weird stuff here.”

But does the meme go too far in making light of often violent situations?

“I think its a fine line between laughing at Florida Man when he throws a taco at someone and understanding that that’s actually reporting on domestic violence,” says Jessica Bryce Young, editor of the Orlando Weekly. “He is assaulting his wife; it was with a taco.”

Ben Conarck, who covers criminal justice for the Florida Times-Union in Jacksonville, says it’s important to remember where many of these stories originate.

“I think you can’t talk about Florida Man without talking about Florida police,” Conarck says, “So many of these stories come from arrests, and we have to understand how police work. Especially in this state, they are largely policing low income areas.”

Pittman remembers getting a police press release about a young girl who was arrested for threats to an elementary school. When he dug deeper and looked at the police report, he and his editor saw the line “Hold for Baker Act.”

“So we chose not to use that one, not to run the wacky looking mugshot or anything like that. I think that’s a line you have to draw everyday with every story,” says Pittman.

He suggests to look for underlying causes and “put those in the story too.”