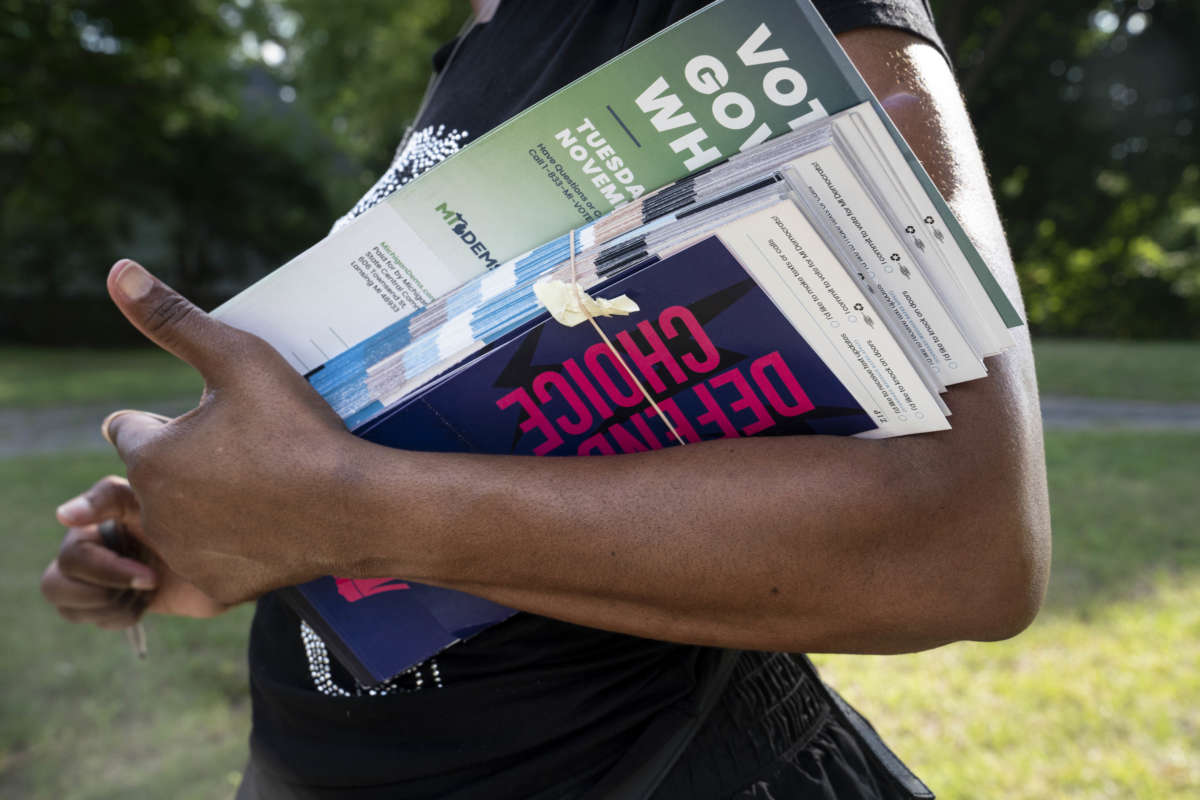 Regina Campbell holds her paperwork for knocking on doors to tell residents about issues on the ballot in the fall, including a potential constitutional amendment on reproductive rights, in Pontiac, Mich., on August 6, 2022.
Image credit: Sarah Rice

LANSING, Mich. – A proposed state constitutional amendment that could protect abortion rights in Michigan has hit another roadblock on its path to November’s ballot. Wednesday, a four-person board deadlocked along partisan lines on whether to send the amendment along to voters this fall.

Abortion rights supporters are expected to appeal the decision straight to the state’s supreme court, but time is ticking. Any language that is slated to appear on the ballot would have to be sent to the printer by Sept. 9.

“Certainly that will be the next step, asking the Supreme Court to have the board do its job, essentially, and put this on the ballot because we have complied with the requirements,” says Darci McConnell of the group Reproductive Freedom for All.

McConnell says the campaign turned in far more signatures than are required to get on the ballot. In fact, the petition broke a record in the state when more than 700,000 voters signed on.

For Michiganders who support abortion rights, the possibility of an amendment to protect abortion is important. The state has a nearly 100-year-old law that makes abortion illegal except in cases where the pregnant person’s life is at risk. For now, that law is held up in litigation and is not being enforced.

But Republicans said the petitions that were circulated had typos and words that were pushed too close together to be easily understood. The proposed amendment has faced scrutiny over alleged typos in its petition language for weeks.

“Call these typos, errors, mistakes, or whatever,” says Eric Doster, the attorney for Citizens to Support MI Women and Children. “This gibberish now before this board does not satisfy the full test requirement under law and this board has never approved, never approved a petition with these types of typos and errors.”

The version of the petition available online at the Board of State Canvassers’ website appears to show the typos, such as: “DECISIONSABOUTALLMATTERSRELATINGTOPREGNANCY.”

Reproductive Freedom for All, the group behind the proposed amendment, can appeal the Wednesday decision straight to the Michigan Supreme Court where Democrats have a narrow majority.

If approved by the justices, Michigan will join other states such as California and Vermont where voters will see similar state constitutional abortion rights amendments on their ballots this November.

After voters in Kansas decided to reject a constitutional amendment that would have restricted abortion rights, Democrats across the country have renewed enthusiasm to push for abortion rights.

How an amendment could affect the rest of Nov.’s ballot

Democrats, including Michigan Gov. Gretchen Whitmer, are pushing hard for an amendment in part because of how much is at stake in November. Whitmer is running for reelection against abortion rights opponent Republican Tudor Dixon, who is endorsed by former President Donald Trump. Dixon made headlines this summer after responding to a question about the hypothetical rape of a 14-year-old by a family member being a “perfect example” of why abortion should be banned.