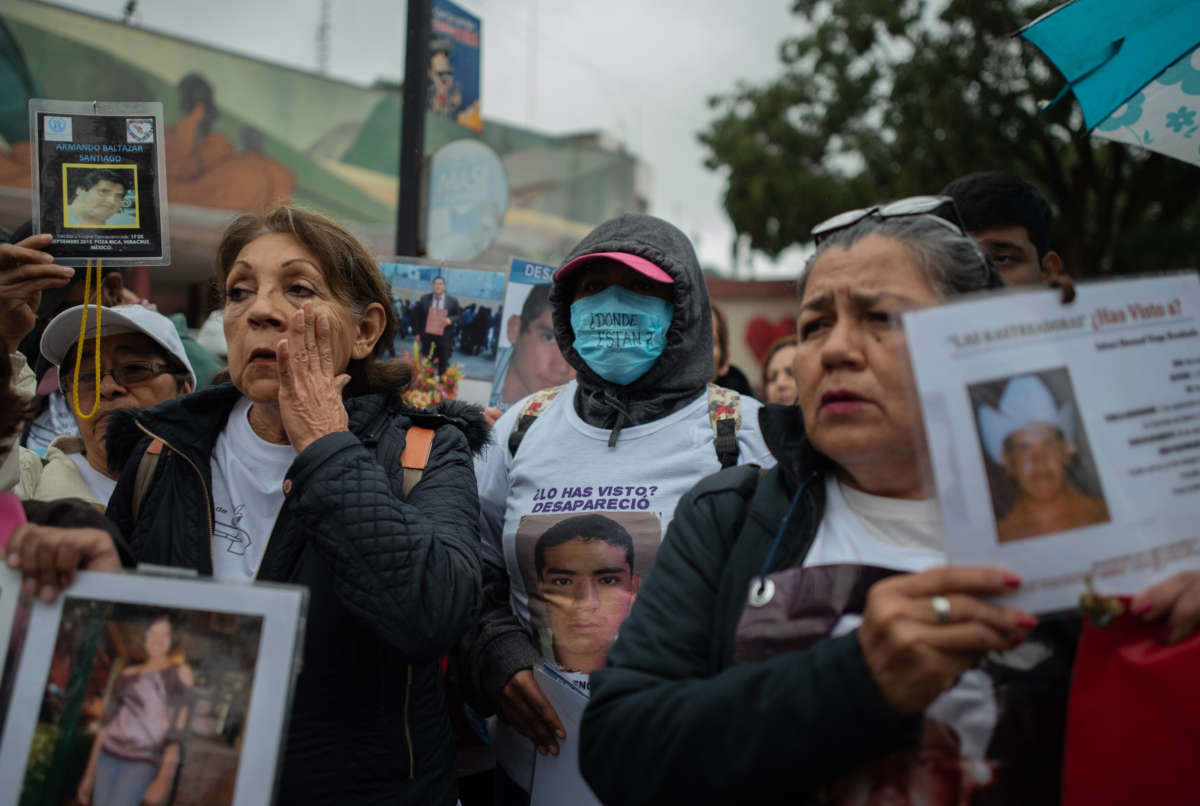 People who gathered in Poza Rico last month brought with them posters, T-shirts and jewelry bearing the images of their missing loved ones.

Editor’s note: This story includes graphic descriptions of the search for human remains.

Manky Lugo has developed a gruesome expertise. Like a human bloodhound, she sniffs out traces of death.

Her gray hair wrapped in a bright-green bandanna, the 64-year-old applies her skill during an annual search for remains of fellow citizens who have vanished without a trace — victims of Mexico’s drug wars and armed groups. A loved one of her own is among the missing.

“I’m looking for my son Juan Francisco, who disappeared on June 19, 2015,” she says. “Three days after he went missing, I started searching for him and haven’t stopped since.”

Lugo is one of hundreds of Mexican citizens from across the country who spent two weeks in February in and around the eastern city of Poza Rica, Veracruz, searching for clandestine graves. All are hoping to find their missing loved ones.

Like most other mothers in this sad collective, Lugo doesn’t want to talk about why her son may have fallen victim to violence. She will only say that he worked in the local mayor’s office.

When others think they might have found a clandestine gravesite, they call Lugo over with her long, pointed metal stick.

“I plunge the stick in as far as I can and then pull it out and smell the tip. If it smells like dead body, it’s positive,” she says. “It’s terrible, but you have to smell it. That’s my job now.”

In January, the Mexican government released a report, revising upward its estimate of the number of citizens who have disappeared to 61,637, up from 40,000 reported in April 2018.

Many of the cases date back to the 1960s. But more than 97% were only reported much later, starting in 2006, when Felipe Calderón, then the president, declared war against the drug cartels.

Most of the missing are men who were in their 20s, and most are believed to have been victims of drug traffickers or organized crime gangs. Others may have run afoul of corrupt politicians or police. Mexico has experienced record-breaking violence in the past decade. Homicides topped nearly 35,000 last year, making 2019 the most violent year since Mexico began keeping such records.

Five thousand Mexicans went missing last year. The search for them has mostly fallen to ordinary citizens. Nearly 100 “collectives” have sprouted up across the country as mothers and some other relatives embark on the gruesome searches themselves. Once a year, for the past five years, the collectives gather to work together and bring attention to their cause. This year’s joint search brought a large group to an abandoned house in the woods outside Poza Rica.

Residents say the grounds were used by a criminal cartel to torture, kill and then incinerate rivals.

The yard is roped off with yellow police tape. Six women at a time don white hazmat suits and enter the area. They shuffle past uniformed agents sent to guard the site.

There are mounds of ash inside and all around a giant outdoor oven. The women stand at opposite ends of a huge wooden sieve filled with ash and sift it, hoping to uncover bone fragments or teeth.

Authorities have investigated this site before, but families of the missing say they didn’t do a thorough job.

“It’s an embarrassment for the Mexican state that we, the families, are the ones doing the searching,” says Mario Vergara Hernández, who came from the state of Guerrero, some 400 miles away, to help out. “They are the specialists. They have the salaries, the technology and the money to do the work, and they don’t. Our technology is just our feet, our shovels and picks,” he says.

He has been searching for his brother who was kidnapped eight years ago and hasn’t been heard from since.

Remains discovered three years ago at the site have yet to be submitted for DNA identification. Local investigators and federal authorities declined NPR’s request for comment, and police at the scene refused to talk to reporters.

President Andrés Manuel López Obrador has vowed to do more to help families in their search for loved ones. His appointee to head the National Search Commission for the Disappeared, Karla Quintana Osuna, declined NPR’s request for an interview, but has called the high number of missing Mexico’s “statistic of horror.” She insists nationwide coordination to find the missing has been improving in recent years.

In Veracruz, friends Teresa Figueroa and Rosa María Velásquez, both in their early 60s, arrived to lend a hand in the annual search. They’ve traveled far, from Baja California state, more than 1,000 miles north of Veracruz, to be part of the annual search group, even though they don’t expect to find traces of their sons here.

They, too, are reluctant to say why their sons may have disappeared. Manelick Ayala Velásquez vanished on Sept. 27, 2017, after walking to a local convenience store in the evening. He was never heard from again. Figueroa says her son, Raul Velez Figueroa, left home on Dec. 27, 2013, and she has not heard from him since, either.

Mirna Nereida Medina Quiñones is one of the lucky ones. She found the remains of her son Roberto on July 14, 2017, in her home state of Sinaloa, about 2 1/2 years after he disappeared.

“I saw his socks, things he sold in his little shop,” she says, all around a hidden gravesite that her local collective was searching. “I got in the grave and started looking for parts. In the end, we found his skull, ribs and one arm, we didn’t find any more.”

Her son’s body parts were released to her after positive DNA identification, and she says she was able to give him a proper burial.

Medina Quiñones says she believes a rival business owner killed her son because Roberto was more successful at selling computer parts. Most homicides don’t get solved in Mexico, with 98% of crimes going unsolved.

Even though she has found her own son, Medina Quiñones sticks with her group of mothers, searching for their missing.

“It’s like a way to thank those that have helped find our loved ones,” she says. “We keep searching for the others.”

For those searching in Veracruz this year, their annual expedition ended with a demonstration on the steps of city hall in downtown Poza Rica. They want all levels of government to do more.

Federal and state authorities do provide vehicles, gasoline and police security for the relatives during the annual search effort. But so much more is needed, the families say.

“Where are our children? Where are they?” they chant.

They want local investigators to search 12 suspicious new sites they uncovered this year and to process bone fragments and teeth they found in the ashes at the abandoned cartel house.

For Rosa María Velásquez, she may not have found the closure she was seeking, but this grim support group has revived her spirits.

“I feel useful here, helping out,” she says. “I may not have found my own son, but maybe I helped another family find theirs.”