The Jan. 6 Committee has voted to subpoena Trump. Here’s what else happened 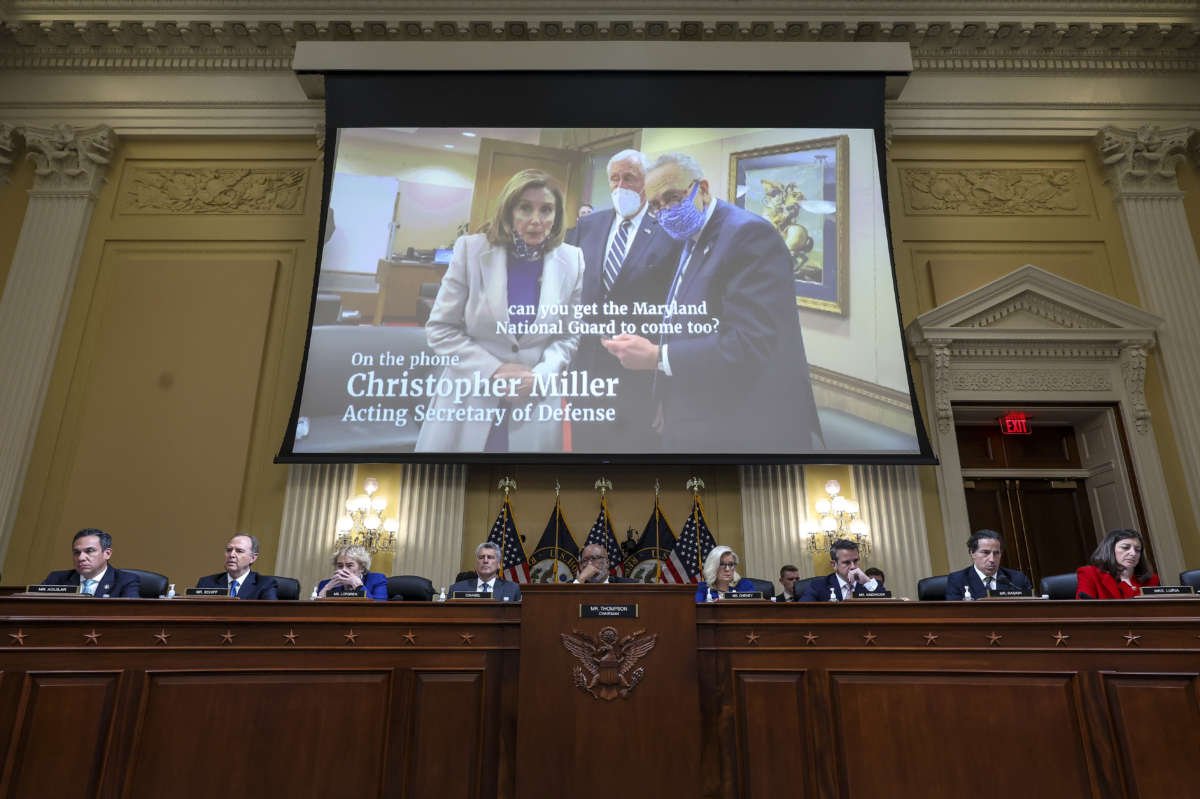 A video of U.S. Speaker of the House Nancy Pelosi (D-CA), Senate Majority Leader Charles Schumer (D-NY) and House Majority Leader Steny Hoyer (D-MD) is played during a hearing by the House Select Committee to Investigate the January 6th Attack on the U.S. Capitol in the Cannon House Office Building on October 13, 2022 in Washington, DC.

The House Select Committee investigating the attack on the Capitol on Jan. 6, 2021, held its ninth — and possible final — hearing on its investigation on Thursday. Unlike previous hearings that lasered in on particular pieces of former President Donald Trump and his allies’ scheme to overturn the 2020 election results, Thursday’s hearing put the committee’s findings into a broader context.

The panel shared new testimony from Republicans who served in the Trump administration, along with new evidence produced by the Secret Service.

Committee Chairman Bennie Thompson, D-Miss., noted in his opening remarks that the panel was convening as a “formal committee business meeting,” which meant that in addition to presenting evidence, it could also hold a committee vote on further investigative actions.

Sure enough, the committee did vote to subpoena Trump to testify. The vote was unanimous: 9-0.

“We are obligated to seek answers directly from the man who set this all in motion, and every American is entitled to those answers so we can act now to protect our republic,” said Rep. Liz Cheney, R-Wyo.

Trump responded to the vote on his Truth Social platform, calling the committee a “total bust” and criticizing it for waiting until now to ask him to testify.

Here’s a look at some of Thursday’s highlights:

The panel also shared video clips of longtime Trump associate Roger Stone, who was previously convicted of lying to Congress, among other crimes. Stone was sentenced to more than three years in prison before Trump pardoned him weeks before leaving office.

“I really do suspect it will still be up in the air,” Stone said. “When that happens, the key thing to do is to claim victory. Possession is nine-tenths of the law. No, we won, f*** you.”

In a different clip, Stone said: “F*** the voting, let’s get right to the violence. We’ll have to start smashing pumpkins, if you know what I mean.”

Stone invoked the 5th Amendment when asked by the panel in previous testimony about the violence during the Jan. 6 attack.

The committee also played audio from another Trump adviser, Steve Bannon, who refused to testify before the committee and is awaiting sentencing for contempt of Congress. In the audio, Bannon describes a premediated plan to declare the election invalid.

“If Trump is losing by 10 or 11 o’clock at night, it’s going to be even crazier. Because he’s going to sit right there and say, ‘they stole it.'”

Despite publicly declaring he won, Trump privately admitted he lost the election. Testimony from former White House officials demonstrate that while the president was publicly forging a campaign to overturn the election, he privately was acknowledging his loss.

In an audio clip, Gen. Mark Milley, Chairman of the Joint Chiefs of Staff, said that while in the Oval Office, Trump said something to the effect of “We lost, we need to let that issue go to the next guy.”

Communications Director Alyssa Farah recalled this comment from Trump: “I popped into the Oval just to give the president the headlines and see how he was doing. And he was looking at the TV and he said, ‘Can you believe I lost to this f***ing guy?’ ”

“I vaguely remember him mentioning that he was a professor, and then essentially he turned the call over to Mr. Eastman, who then proceeded to talk about the importance of the RNC helping the campaign gather these contingent electors in case any of the legal challenges that were ongoing changed the result of any of the states,” McDaniel said.

Secret Service had tips about expected violence on Jan. 6. Rep. Adam Schiff, D-Calif., said on Dec. 26, a Secret Service field office shared a tip that had been received by the FBI. The source said the Proud Boys, a right-wing extremist group, planned to march into D.C. with weapons.

“They think that they will have a large enough group to march into D.C. armed and will outnumber the police so they can’t be stopped,” a Secret Service email read.

“Their plan is to literally kill people,” the source wrote. “Please, please take this tip seriously and investigate further.”

On Dec. 31, 2020, agents had sent out reports that Trump supporters planned to march and occupy the Capitol.

On Jan. 5, 2021, the agency flagged a social media account that said someone threatened to bring a sniper rifle to a rally the next day.

In previous hearings, the panel described how the crowd that arrived on Jan. 6 was heavily armed, and that many wouldn’t enter into the Ellipse because they would have to go through magnetometers, a fact Trump was aware of.

The committee shared a text from Jason Miller, a communications adviser to Mark Meadows, that read: “I GOT THE BASE FIRED UP,” and sent a link to a webpage that had violent comments about Jan. 6.

One comment read: “Our lawmakers in Congress can leave one of two ways. One, in a body bag. Two, after rightfully certifying Trump the winner.”

“Do you believe this?” House Speaker Nancy Pelosi, D-Calif., can be seen saying to House Majority Whip Rep. Jim Clyburn, after being informed that members on the House floor were donning tear gas masks in anticipation of a breach.

The footage of congressional leaders mobilizing to ensure that Congress could both fulfill its constitutional duty by certifying the election results and protect the Capitol and the people inside provides a stark contrast to the actions of Trump that day. The committee shared evidence that Trump ignored the pleas from his advisors to make a statement to put an end to the violence.

Secret Service feared for Pence’s safety. New documents from the agency show that after Trump tweeted his disappointment with his no. 2 on Jan. 6, an agent warned that it was “probably not going to be good for Pence.” Another agent noted there were 24,000 likes on Trump’s tweet within two minutes.

Anika Navaroli, a former Twitter employee, testified that the rioters were “literally calling for assassination” as Trump’s tweet on Pence went out.

Mick Mulvaney confirms GOP Rep’s account of McCarthy’s call to Trump. GOP Rep. Jaime Herrera Beutler of Washington had previously shared details of a conversation between Republican Leader Kevin McCarthy and Trump on Jan. 6, in which McCarthy asked Trump to call off his supporters as his staff was “running for their lives.”

She said the president responded: “I guess they’re just more upset about the election theft than you are.”

Mulvaney, a former chief of staff to Trump, corroborated that account in video testimony that was shared Thursday.

“The president told them something along the lines of, ‘Kevin, maybe these people are just more angry about this than you are. Maybe they’re more upset.’ ”

‘Trump was central player’. The hearing went into more details on then-President Trump’s state of mind after he lost the election and continued to pursue avenues to overturn the election results.

“[Trump] tried to take away the voice of the American people in choosing their president and replace the will of the voters with his will to remain in power,” said Thompson. “He is the one person at the center of the story of what happened on Jan. 6.”

Even when top law enforcement officials told the President his election-fraud claims were false, Trump still repeated the nonsense to a wide audience, over and over again. pic.twitter.com/PIRy9XSF3O

In these hearings, Cheney has repeatedly put the investigation into the larger context of American democracy.

“Our nation cannot only punish the foot soldiers who stormed our Capitol,” she said. “With every effort to excuse or justify the conduct of the former president, we chip away at the foundation of our Republic.”

She warned that without accountability, another insurrection and assault on democracy could recur.

She added: “Please consider where our nation is in its history. Consider whether we can survive for another 246 years.”